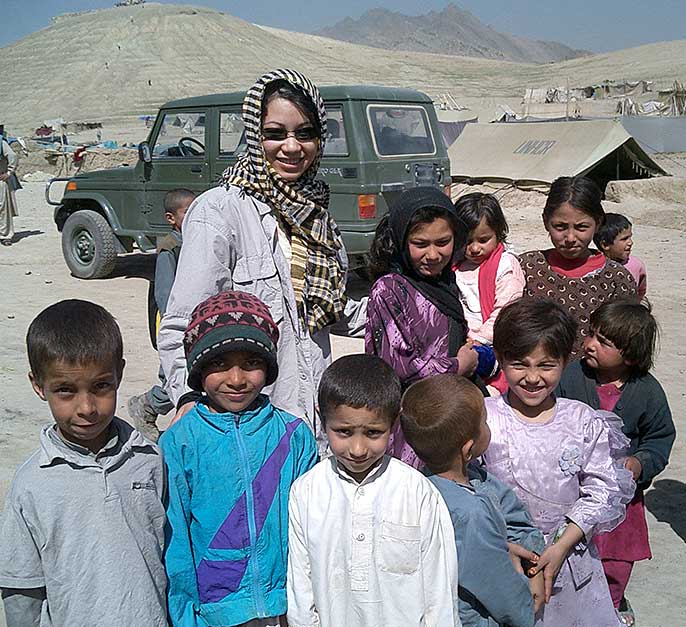 Tigon Abalos, now a dental student at UCLA, volunteered to work with Afghan refugees when she was in the Army stationed in Afghanistan.

When 9/11 happened, it jolted Tigon Abalos with such force that she felt she had to do something for the country that had given her and her family, former refugees from Vietnam, opportunities for a better life in a new country.

Two years later, Abalos, who was already serving part-time in the California Army National Guard, interrupted her college career to enlist in the Army and train as a counter-intelligence specialist. That was the beginning of a six-year, military career that opened up more opportunities for Abalos: She met her future husband, a fellow soldier, and she discovered her life’s calling in Afghanistan when she began volunteering to help Afghan refugees.

Abalos, now a UCLA School of Dentistry student and one of more than 400 student veterans, will draw on her deep appreciation for her service experience when she speaks at UCLA’s annual Veterans Day ceremony Monday (Nov. 10) at 10:30 a.m. in Wilson Plaza, a time when the campus community comes together to salute veterans and remember the sacrifices they’ve made. Also speaking will be Chancellor Gene Block and Kelly Schmader, assistant vice chancellor of facilities management at UCLA and a 28-year veteran of the U.S. Navy Civil Engineer Corps.

“Serving in the Army allowed me to see the world,” said Abalos. “My experiences gave me a whole new perspective on life. While serving, I also became motivated to complete my college degree.” And it was while working with the refugees in Afghanistan that Abalos became aware of a critical shortage of dentists.

The daughter of a former South Vietnamese former military police officer, Abalos knew very little English and nothing about American culture when she arrived with her family in Fresno in 1996, five years before the terrorist attacks of 9/11. Nevertheless, she managed to become the first in her family to finish high school, graduating with honors, and then enrolling at UC Berkeley, only to leave for military service two years later.

When Abalos was discharged from the Army in 2008 as a staff sergeant with a string of medals and an Army Combat Action Badge for working under enemy fire in Afghanistan, she set her sights on a college degree and a career in dentistry. In 2012, she graduated from Cal State Fresno with a degree in chemistry and an invitation to enter UCLA School of Dentistry, her top choice.

“I wouldn’t have even considered dental school had it not been for my humanitarian work in Afghanistan,” she said. “The military taught me about teamwork and to never give up, both traits that I now use in dental school.”

As an older dental student and a mother — she gave birth to a son about the same time she started at UCLA — Abalos has faced challenges with the same “can-do” attitude that she learned in the Army.

“I have my own struggles, much like anyone would in a demanding training program,” said Abalos. “But, I feel like I’ve lived a lot of life already, compared to some of my younger colleagues. I’ve seen the world. I can handle stressful situation and have realistic expectations.”

She and her husband, who is now stationed in Long Beach after transferring to the California Army National Guard, share in the care of their 2-year-old son. “It is a lot of time and sacrifice, but we make it work,” she said.

Even with these added responsibilities, Abalos has continued to be actively involved in veterans’ affairs. As an undergrad, she was part of Fresno State’s Student Veterans Organization and received the National Student Veterans Association STEM Scholarship Award.

At UCLA, she is currently on a student committee in the dental school that provides services and oral health education to veterans in the Los Angeles area. She also volunteers in the dental clinic assisting patients at the West Los Angeles VA Medical Center.

UCLA supports many such initiatives for veterans, ranging from programs that help student veterans navigate the benefits process to efforts to bring injured vets and their families to UCLA’s medical facilities through the nationally acclaimed Operation Mend.

After graduation, Abalos hopes to enter a hospital dentistry residency program that integrates medicine and dentistry. Patients who require this type of dental care have severe medical, physical or mental impairments. Her goal is to return to the military as an officer in the Naval Reserve and practice at a VA hospital somewhere in California.

“I feel that given my background in combat and the military, I can better relate to people who have experienced trauma,” said Abalos. “For example, patients who have posttraumatic stress disorder are going to trust someone that has gone through what they have gone through.”

For now Abalos is concentrating on graduating and going onto the next step of her career. “My career path has been a bit of a winding road,” she said. “But I know where I’m going now.

“The timeworn Army slogan when I enlisted was ‘Be all you can be.’ I guess I just really took that heart,” she said.