The future of NAFTA and the state of U.S.-Mexico relations

The future of NAFTA and the state of U.S.-Mexico relations
A forum hosted by the University of California and Tecnológico de Monterrey 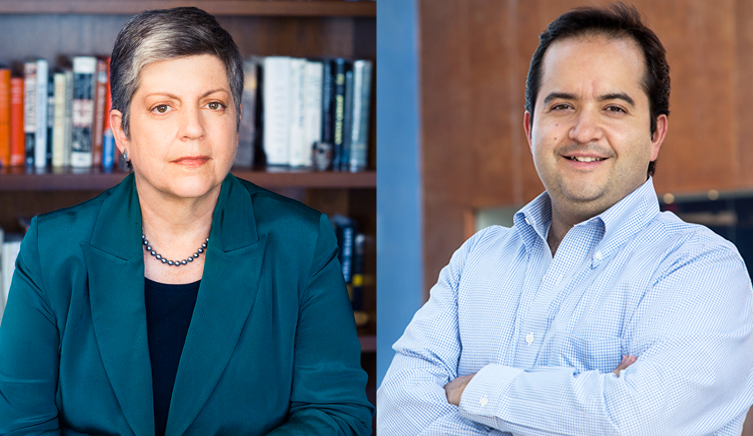 For more than two decades, the North American Free Trade Agreement (NAFTA) has served as a cornerstone of the U.S.-Mexico relationship. As the administration contemplates significant policy changes – from talks of renegotiating NAFTA, to building a border wall, to shifting immigration priorities – the future of U.S.-Mexico trade relations is uncertain.

The University of California on Sept. 21 will bring together academics, policymakers, business leaders and other experts for a discussion about the economic and strategic aspects of NAFTA, and to explore the broader future of U.S.-Mexico relations.

The university is uniquely positioned to convene this timely dialogue. Through its UC-Mexico initiative, launched by UC President Janet Napolitano in 2014, UC is undertaking a strategic effort to strengthen cross-border partnerships and educate the next generation of leaders.

The forum, to be held at the UC Washington Center, will include a diverse group of thought-leaders to discuss the impact that NAFTA has on the economy, jobs and labor mobility, education, national security and trade in the U.S., Mexico and Canada. In addition, the forum will examine the path forward should NAFTA be renegotiated. With leadership from UC, the forum will provide a western perspective on the NAFTA debate.

Much has been made of the need to modernize NAFTA, given the advent of technologies and trade practices that did not exist 23 years ago. This panel will explore questions such as: What more can be done to ensure that small and medium-sized businesses have a seat at the table in trade negotiations? How can NAFTA be improved to ensure that e-commerce and cross-border trade in digital products are both easy and secure?

In addition, panelists will provide reflections on how to update rules on dispute settlement and origin of goods. Speakers will also provide an update on the current stance of the White House on trade with Mexico and opportunities for the U.S. and Mexico to find common ground during the renegotiation.

Panelists will explain how NAFTA has enabled the development of globally competitive industries in North America, advancing shared opportunities on energy sustainability as well as creating supply chains and production processes that span the continent. Discussions will explore questions such as how can a mutually beneficial renegotiation modernize and strengthen the agreement? What impact could changes in our trade relationship with Mexico have not just for American businesses and workers, but for the world economy and national security?

How can the U.S. and Mexico continue to forge a productive relationship that supports our shared history and culture and the continued flow of people and ideas between the two countries? Given the current political climate, how important is it to open new avenues for cross-border cooperation outside of traditional diplomacy? How can collaborations like the UC-Mexico Initiative serve as a model for new opportunities for bolstering deeper integration moving forward?

Panel III (1:20–2:15 pm)
Developing a Workforce for the Globalized Economy

Speakers will discuss opportunities for targeted workforce development in the globalized 21st century economy. The panel will explore the tension between international trade and the labor market and identify areas of the agreement that should be updated to support quality jobs in North America. They will also discuss local, state and federal policy options for supporting the “jobs of tomorrow” and further developing a global magnet for talent within the NAFTA countries.

What are the spillovers from the U.S.-Mexico economic relationship into other areas of cooperation such as diplomacy and security? What must be done to manage the emergence of nationalism in North America? What kind of trade agreements and diplomatic efforts must we pursue to keep an atmosphere of partnership in our region?

While the debate over the future of NAFTA takes place in Washington, U.S. trade with Mexico is largely defined by specialization at the regional, state and city levels. California and the Western region have a unique perspective on what may be gained and lost in changes to the U.S.-Mexico trade relationship, especially related to agriculture and manufacturing. This panel explores the importance of trade to the future of the dynamic Western U.S.-Mexico relationship.