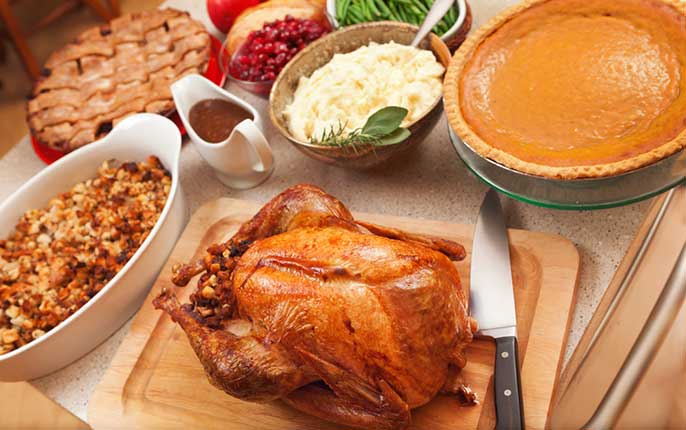 Recognizing the importance of food, UC President Janet Napolitano, together with UC’s 10 chancellors, launched the UC Global Food Initiative in July to help put UC’s campuses, the state and the world on a pathway to sustainably and nutritiously feed itself.

The initiative, which involves all 10 UC campuses, UC’s Division of Agriculture and Natural Resources, and Lawrence Berkeley National Laboratory, builds on existing efforts and is creating new collaborations to develop and export solutions for food security, health and sustainability.

Read more about the initaitive

Before you dive into that Thanksgiving turkey or apple pie, take a bite of the food research coming from the University of California.

From poultry to pies and sugar to soil, UC scientists are uncovering insights across the food spectrum that can make your holidays healthier, happier and more mindful.

Food is not just about eating well; it’s essential to how we live, work and thrive.

In that spirit, building off the UC Global Food Initiative, here’s a sampling of holiday-themed UC food research from each campus.

Thanksgiving is synonymous with turkey. But when it comes to cooking poultry, many consumers do not follow recommended food safety practices in preparing their own meals at home, according to research from UC Davis.

The study, which examined preparation of raw poultry, found that the most common risks stemmed from cross contamination and insufficient cooking.

“The most surprising aspect of these findings to me was the prevalence of undercooking,” said Christine Bruhn, director of the Center for Consumer research at UC Davis, who authored the study.

Most risks can be avoided by practicing thorough hand-washing, never rinsing raw poultry in the sink and using calibrated thermometers to determine that poultry is fully cooked.

With Thanksgiving just around the corner, bakers of all skill levels are making apple pies.

UCLA professor and biophysicist Amy Rowat says the shape of your apple slices, the size of your butter chunks and the surface-area-to-volume ratio of the crust, among other things, play a role in making a perfect apple pie that your friends and family will rave about.

The science of food is a popular topic at UCLA, where students in Rowat's “Science and Food” course not only explore why, for example, different cuts of meat have different textures, why some food is crispy, and how to create and stabilize the air pockets you find in a soufflé; they also square off in an annual “Scientific Bake-Off.” There, they prepare apple pies and explain their results. The students, who taste more than a half dozen apple pies at the beginning of the course to establish a better understanding of what makes a good pie, present their desserts in a large-scale tasting.

It’s the time of year when many of us loosen our grips on our diets, succumbing to the temptations of festive foods like candy canes, sugar cookies, eggnog and chocolate fudge. What’s the chemistry behind our favorite candies?

“Sugar is the basis for many holiday treats including divinity, peanut brittle, toffee, candy canes, toffee and caramels,” says UC Riverside’s Cindy Larive, a professor of chemistry. “As a sugar syrup is heated, the amount of water present decreases. Key stages are indicated by the behavior of the syrup when dropped into cold water. Once all of the water has been evaporated, the temperature of the syrup increases further and caramelization begins. This occurs when the sucrose begins to break down chemically, generating a mixture of chemicals.”

4. UC San Francisco: Finding the hidden sugar — and its effect on health

Sugar isn’t found only in desserts; it’s brimming in sweetened beverages and even hidden in many savory foods, such as bread and pasta sauce. In November, researchers at UC San Francisco launched SugarScience, a groundbreaking research and education initiative designed to highlight the most authoritative scientific findings on added sugar and its impact on health.

Developed by a team of UCSF health scientists in collaboration with scientists at UC Davis and Emory University School of Medicine, the national initiative reflects an exhaustive review of more than 8,000 scientific papers that have been published to date on the health effects of added sugar.

The research shows strong evidence of links between the overconsumption of added sugar and chronic diseases, including type 2 diabetes, heart disease and liver disease.

“The average American consumes nearly three times the recommended amount of added sugar every day, which is taking a tremendous toll on our nation’s health,” said Laura Schmidt, a UCSF professor in the Philip R. Lee Institute for Health Policy Studies and the lead investigator on the project. “This is the definitive science that establishes the causative link between sugar and chronic disease across the population.”

5. Agriculture and Natural Resources: Getting to the root of the matter

For a healthier, naturally sweet alternative to sugary treats, try yams or sweet potatoes, a staple of holiday meals.

“A yam is a sweet potato, at least for those grown in the U.S.,” says Scott Stoddard, UC Cooperative Extension advisor in Merced County. “The rest of country has predominately just one type of sweet potato, with tan skin and orange flesh, but in California, we have four marketing classes.”

The red-skinned sweet potatoes are what many people call yams. Stoddard, who evaluates sweet potato varieties for production in California, is trying to identify lines with red and purple skin that grow and store well. It is a high priority for the industry because the Garnet class dominates many markets throughout the state. “Apparently, Californians like well-tanned sweet potatoes, especially in SoCal,” he said.

At UC Santa Cruz, the Center for Agroecology and Sustainable Food Systems (CASFS) pioneered hands-on training in organic agriculture more than 45 years ago. Late fall reveals a bounty of winter vegetables that provide a perfect complement to heavy holiday food fare. From broccoli to cauliflower, shallots to squash, organic veggies are essential to any holiday meal.

Dining also will host a holiday meal over the Thanksgiving break and the campus food bank will provide baskets of food to registered members before the holiday.

Urban residents in neighborhoods lacking stores with fresh, affordable produce need look no further than their own yards to find wild edibles to add to the dinner table.

Gathered at the corner of Sycamore Avenue and South 45th Street in Richmond, UC Berkeley professors Philip Stark and Tom Carlson and a team of students are in the heart of a food desert, an area without easy access to fresh, healthy and affordable food. Yet, in this low-income neighborhood, with more liquor and fast-food shops than grocery stores, there’s a bounty of nutritious and free goodness thriving in some unlikely places — a parched lawn, sidewalk cracks, along a chain link fence. That bounty is almost entirely weeds.

This fall, Stark and Carlson launched a new interdisciplinary project that’s bringing students to three East Bay food deserts to forage for wild edibles — dandelions, blackberries, oxalis, plantago, nasturtiums, mallow and more — and to document their availability. It’s being funded by a seed grant from the campus’ 2-year-old Berkeley Food Institute, headquarters for nearly 100 faculty and staff members on a mission to change the nation’s food systems to “promote diversity, justice, resilience and health.”

The site is located in the Chollas Creek Watershed where poverty, obesity and environmental degradation pose serious social and environmental public health problems. Many residents also lack access to fresh fruits and vegetables. Neighbors active at the growing grounds are partnering with nonprofit groups, UC San Diego researchers and students to address these problems.

Keith Pezzoli, director of the Urban Studies and Planning Program at UC San Diego and a faculty member in the Department of Communication, is an active participant at OVGG. Pezzoli is working with a team of civically engaged scientists on an Urban Agriculture and Food Disparities research project. This project includes supporting the cultivation of community gardens and food forests on vacant lots, beginning with the OVGG site. Food forests mimic woodland ecosystems, featuring fruit and nut trees and other edible plants.

OVGG leadership aims to make the site a model for positive social and ecological change in underserved areas. Pezzoli and his research team, which includes undergraduate and graduate students, are helping make this happen by bringing science and technology to the people.

They will develop partnerships with community groups and hold public meetings to learn what obesity-related issues are of particular concern in the community. Forty-three percent of fifth-, seventh- and ninth-grade Merced County students were overweight or obese, according to the 2011 study A Patchwork of Progress.

Rising incomes and urbanization around the world are driving a global dietary transition that is, in turn, diminishing the health of both people and the planet. Such is the key finding of new research out of UC Santa Barbara’s Bren School of Environmental Science & Management. The paper, co-authored by UCSB professor David Tilman, is the first to show the global links among the elements of what Tilman refers to as the “tightly linked diet-environment-health trilemma.”

“Most of us have heard that some diets are healthier, that eating too many calories is bad for you and that red meat harms the environment,” said Tilman, whose team gathered data on dietary trends and environmental impacts for 90 percent of the global population for this first-of-its-kind study. “We were surprised at how rapidly and consistently diets were changing around the world, how massively this would impact global health, and how much it would increase global greenhouse gas emissions and the destruction of tropical forests and other ecosystems.”

“Better diets are the solution to these big problems,” Tilman added. “Only better diets can prevent a massive global epidemic of chronic noncontagious disease. These same diets would also protect the environment. Since big food companies produce so much of what is eaten, we need them to be part of this solution. … It is a niche waiting to be filled.”

With California in the midst of a record-setting drought, how has the state’s Central Valley maintained its role as the nation’s salad bowl? By building more wells and tapping into groundwater. But there is new evidence that so much of this underground resource is being depleted that it threatens the water supply in California and other parts of the western United States.

Jay Famiglietti, a senior water cycle scientist at NASA’s Jet Propulsion Laboratory on leave from UC Irvine, where he is an Earth system science professor, works on a team that uses data from NASA’s Gravity Recovery and Climate Experiment (GRACE) satellite mission to track groundwater changes in the Colorado River Basin. The changes have been alarming, he said. “Policy change is needed or we will run out of groundwater,” Famiglietti said.

California has just enacted a law that for the first time takes steps toward regulating groundwater. But it could take 25 years to fully implement, notes a 60 Minutes story that features Famiglietti.

Did you know that a single gram of soil contains hundreds of millions of microbes?

Scientists are learning that microbes play a greater role in our health and our environment than we had previously thought.

Lawrence Berkeley National Laboratory experts in microbiology, genomics, computation, geochemistry, imaging and other areas are investigating how plants and microbial soil communities interact and function in dynamic terrestrial systems, particularly in response to changes in climate and land use. Ultimately they hope to better understand how marginal lands can be made more fertile and develop new mapping technologies to quantify microbiological processes in soil.