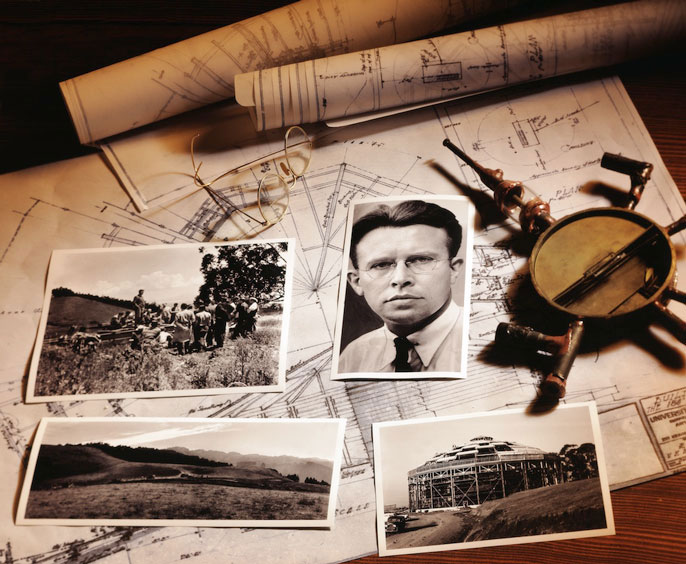 Ernest Orlando Lawrence and the five-inch cyclotron at the site of the Rad Lab in the Berkeley hills.

Berkeley Lab and the periodic table

A century ago, the periodic table looked much different than it does today. It had empty spots for elements that had not yet been found, and ended at uranium (element 92), the heaviest known element until 1940. But scientists were dreaming about artificially creating even heavier elements.

“For some reason, they thought you could go beyond uranium,” said Berkeley Lab scientist Gauthier Deblonde. “Making those artificial elements is a scientific challenge, but just thinking about making something new that nobody had ever seen before — I think that was the true intellectual and scientific leap.”

Starting in the 1930s, scientists at Lawrence Berkeley National Laboratory — or, the Rad Lab, as it was called then — began building the big machines and assembling the teams of scientists and engineers to chase those elements down. Ernesto Orlando Lawrence’s charisma, unbridled enthusiasm, and almost uncanny ability to procure financial donations from private sources enabled him to recruit the best and the brightest. These included Edwin McMillan, Luis Alvarez, Glenn Seaborg, and Emilio Segrè, all of whom would go on to be Nobel laureates.

Over the next several decades they were credited with discovering 16 elements, including every element from neptunium (element 93) to seaborgium (106). “It was the golden age of nuclear science,” said Jose Alonso, a researcher who was on the team that discovered element 106.

The story behind the elements

At one point they were discovering so many elements that Seaborg announced two new discoveries on a live children’s radio show when one of the kids jokingly asked him if any new elements had been discovered lately. Seaborg told the child: “So now you’ll have to tell your teachers to change the 92 elements in your schoolbook to 96 elements.” (The show was Quiz Kids, the year was 1945, and the new elements, 95 and 96, were later named americium and curium. Neptunium and plutonium has also been discovered in the intervening years.)

The first element that Berkeley Lab played a role in discovering was technetium (element 43), which was an empty spot on the periodic table. In 1937, Segrè, then a professor in Italy, had visited the Rad Lab. Upon his return to Italy, he asked Lawrence for a piece of molybdenum that had been at the cyclotron and had been exposed to a beam of deuterons, a form of hydrogen.

“Segrè knew that by bombarding molybdenum, element 42, with deuterium, the deuterium could increase the size of that nucleus until it was 43 by adding a proton. So he realized it might be possible to find that missing element number 43 … by doing a chemical separation — that’s what he and his co-worker did,” said Berkeley Lab physicist Robert Cahn. “I believe it was actually mailed to him! Imagine mailing a radioactive piece of molybdenum to Italy — you wouldn’t do that today.”

Berkeley Lab scientists are also credited with the discovery of hundreds of isotopes, which are versions of elements that have the same number of protons in their nuclei but have either fewer or more neutrons. (Neutrons are particles that lack an electric charge.) The Lab’s claim to more than 630 isotopes is more than any other science institution in the world.

Radioisotopes have become widespread and important tools in medicine, allowing doctors to treat and diagnose various conditions. Berkeley Lab was a driving force in the emergence and growth of nuclear medicine. Today, chemists and nuclear physicists at Berkeley Lab are working on ways to produce new isotopes for medical applications.

“We’ve been working on ways to develop these isotopes to make them quickly and efficiently so they can be used to treat disease,” said Lee Bernstein, lead of Berkeley Lab’s Nuclear Data Group and a UC Berkeley professor of nuclear engineering. “Actinium-225, in particular, looks to be an extremely promising candidate for the treatment of cancer, and it’s extremely hard to make. There are a few other elements that also look extremely promising.”

There is also ongoing work in the more fundamental aspects of certain elements. In particular, Berkeley Lab researchers are enlisting new capabilities to measure the heaviest artificially created elements — the so-called “superheavies,” such as moscovium (115) and rutherfordium (104) — with extreme precision, which could confirm or unseat conventional theories about their shape and other properties. Although most have no practical uses today, potential future applications are boundless.

“Ever since the first discoveries of synthetic elements we’ve been devising new ways of detecting their properties,” said Barbara Jacak, director of Berkeley Lab’s Nuclear Science Division and a UC Berkeley professor of physics. “People had no idea you could use [certain isotopes] in medical applications when they first discovered those. Now they’re using them to deliver radiation to kill cancer cells. So who knows where our superheavy research will one day lead.”