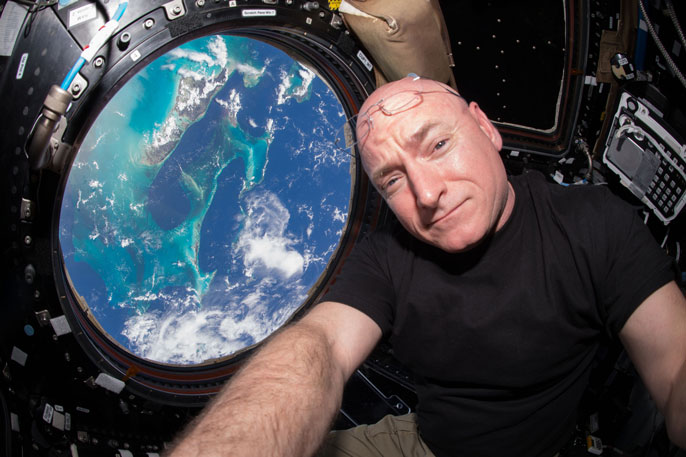 When astronaut Scott Kelly returns to Earth on March 1, half of NASA’s first-of-its-kind study of twin astronauts and long duration space flight, researchers at University of California, San Diego School of Medicine and elsewhere will launch the mission’s next phase.

UC San Diego School of Medicine researchers are part of a national collaboration between NASA’s Human Research Program, the National Space Biomedical Research Institute and 10 investigative teams around the country, all seeking to better understand the effects of extended space travel by analyzing blood, urine and other samples from identical twin astronauts, Scott and Mark Kelly.

Scott has spent the last year on the International Space Station – the longest period an American has lived in space, while his twin remained on Earth. A variety of tests, measuring visual acuity, cardiovascular function and other factors, were periodically administered to both brothers throughout the year, providing researchers with the unprecedented opportunity to compare data from two genetically identical people who have spent a year in vastly different environments.

“NASA’s priority is to maintain crew member health throughout long duration missions,” said Brinda Rana, Ph.D., a professor in the Department of Psychiatry and principal investigator on the UC San Diego School of Medicine study. Researchers in the twin study, who hail from multiple research centers nationwide, are working together to understand how extended space flight affects cognition (e.g. high level executive functions), physiology (e.g. heart, eye and immune function), the microbiome (bacteria that live in the gut) and the astronaut’s “omics” (genomics, proteomics and metabolomics) profiles.

“Our studies will provide important data on how the space environment impacts the human body at the molecular level so that NASA can identify risk factors and countermeasures for possible health issues induced by prolonged space travel, such as a mission to Mars,” said Rana.

Preparing for longer trips in space

NASA and astronauts have long known that traveling through space, with its microgravity, radiation exposure, isolation, confinement and elevated carbon dioxide—which can happen on space vehicles — can produce potentially adverse side effects.

“Our bodies are adapted to a 1g environment in which gravity pulls the blood toward the feet,” Rana said. “In space, with nearly zero gravity, the blood and other fluids in the body shift upwards toward the upper body around the heart, the neck and the head. This fluid shift may cause changes in brain pressure and vision, which have been observed in some astronauts.”

Thus far, space missions have flown for relatively short periods, most lasting less than six months. Future NASA destinations under consideration, such as Mars or asteroids, will require much longer periods in space. A trip to Mars could last 30 months, perhaps longer.

In her project, Rana will focus on identifying metabolites and proteins in the twins’ blood and urine that can serve as biomarkers – biological indicators – indicating early signs of cardiovascular, vision and other possible physiological problems. Metabolites are small molecules that are naturally produced byproducts of the body’s processes and include sugars, vitamins, amino acids and other substances. A balance of metabolites in blood and elimination in urine is important for maintaining health.

“Metabolite levels in the human body are influenced by everyday factors such as nutrition, smoking and physical activity and can be dramatically modified in disease states,” said study collaborator Kumar Sharma, M.D., professor of medicine and director of the Institute of Metabolomic Medicine at UC San Diego School of Medicine. “They can also be affected by stress and environmental factors, including those unique elements such as microgravity, radiation and circadian disruption that are experienced by astronauts.”

Scott Kelly’s samples have been stored on the International Space Station and will arrive on a returning SpaceX capsule about a month after his return. Researchers from UC San Diego School of Medicine and the other twin investigators will coordinate sample and data sharing as one large, integrated research team. The team hopes to complete its analyses by December.

Rana added that the knowledge gained from the twin studies will also have medical applications on Earth. “In addition to aiding our space program, our collective projects will also have impacts on clinical areas such as traumatic brain injury induced elevations of intracranial pressure as well as glaucoma, bone loss and atherosclerosis,” she said.