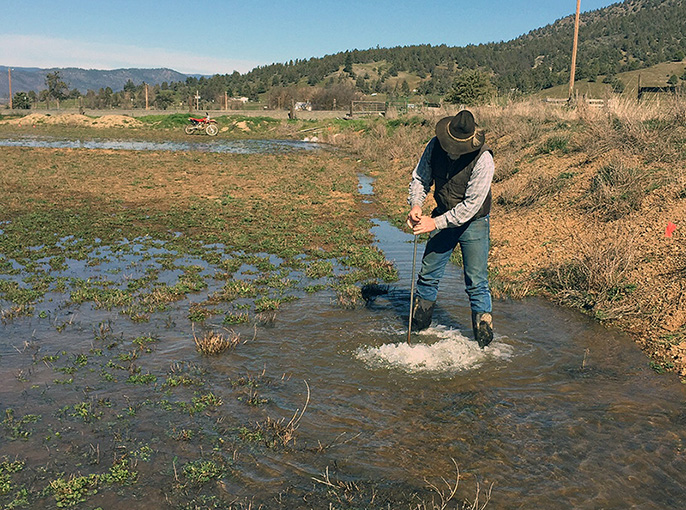 California's aquifers are shrinking as more growers pump groundwater to keep crops alive. But that fertile farmland may also provide the means for replenishing groundwater to benefit everyone in the drought-stricken state.

Researchers at the University of California, Davis, are encouraged by early results from tests to see if deliberately flooding farmland in winter can replenish aquifers without harming crops or affecting drinking water.

In spring 2015, Dahlke's team flooded alfalfa at Bryan-Morris Ranch in Siskiyou County, applying more than twice the irrigation the field normally gets in a year. The field produced more weeds than usual, but otherwise, the alfalfa suffered no ill effects.

"It was amazing to see how well the land absorbed the water and how quickly the water table rose," said Jim Morris, Bryan-Morris Ranch manager. "That's good news for farming and the environment."

Next up: Flooding almond orchards

Dahlke and her team will test flooding on almonds in the Central Valley this winter, looking at plant physiology, infiltration rates, water quality and costs. They are building on previous research involving UC Davis and environmental engineers in the Kings River Basin, where up to 75 percent of diverted floodwater percolated down
to aquifers. In that research, scientists flooded pistachios, alfalfa hay and wine grapes.

"Our wine grapes were under water for five months, which raised a few eyebrows, but they did fine," said Don Cameron, manager of Terranova Ranch along the Kings River in Fresno County. "Diverting floodwater to farms can recharge groundwater and reduce the risk of downstream flooding. It's a good situation all around."

Saving for a sunny day

California is in chronic groundwater overdraft: There's more water being pumped from the ground than filtering in. In wet years, gravity helps refill aquifers as land absorbs water from rain, rivers, and snowmelt. In dry years, several water districts help that along by diverting excess water during storms and flood releases into
infiltration basins ─ confined areas of sandy soil.

But land dedicated to infiltration is scarce. Can California's farmland be called into service?

There's a lot to consider, Dahlke said. Not all soils are particularly permeable, and not all crops can tolerate extra irrigation in the winter. Some soils are especially salty, and some crops need more nitrogen than others.

Researchers wonder whether flooding fertilized farmland or saline soil will leach those chemicals into the groundwater. Or, could on-farm flooding actually improve groundwater quality by diluting salts and nitrates?

Soil expert Anthony O'Geen, a UC Cooperative Extension specialist with the UC Davis Department of Land, Air and Water Resources, recently concluded in the journal California Agriculture that some 3.6 million acres of farmland have good recharge potential because they could likely accommodate deep percolation with little risk of
crop damage or groundwater contamination. Pears, wine grapes, many annual crops, and some varieties of almonds, peaches, and plums appear best suited for on-farm flooding, the team found.

"Alfalfa might also be an ideal crop for groundwater banking because it requires little or no nitrogen fertilizer," O'Geen said.