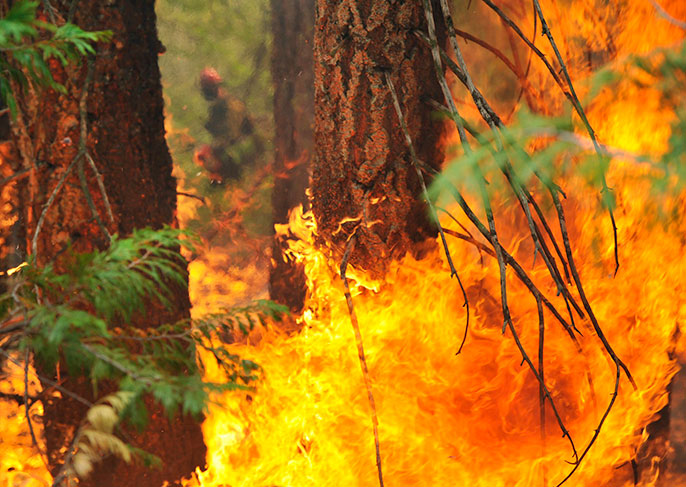 Wildfire in the Sequoia National Forest

Wildfires have ravaged both populated and unpopulated regions of Southern California at an increasing rate over the past few decades, and scientists from three University of California campuses and partner institutions are predicting that by midcentury, as a consequence of climate change causing hotter and drier summers, a lot more will go up in flames.

In research published today (Sept. 8) in the journal Environmental Research Letters, the scientists discuss the split-personality nature of Southern California wildfires. They describe two distinct wildfire regimes, those driven by offshore Santa Ana winds that kick up in the fall and non-Santa Ana fires that result primarily from hot, dry conditions in the summer.

They found that Santa Ana fires burn with more intensity, and they do their worst in a shorter period of time than summer fires; in a typical Santa Ana fire, half of the territory burned is consumed in the first day of the blaze.

“The Santa Ana fires are much larger currently, and tend to spread into the urban-wildland interface,” said Alex Hall, a member of UCLA’s Institute of the Environment and Sustainability and co-author of the study. “The non-Santa-Ana fires tend to be confined to less-populated forest areas with fewer structures, but as they get bigger, they could start to intrude into the urban-wildland interface. We will become more vulnerable to those summer fires, and that’s a new way of seeing fire risk in southern California.”

“The traditional one-size-fits-all fuel management strategy will not be effective in reducing fire risks and preventing large fires because factors such as fuel and weather vary for different fire regimes,” said lead author Yufang Jin, assistant professor in the Department of Land, Air and Water Resources at UC Davis and a researcher at UC Irvine at the time of the study. “California and the western U.S. are expected to face increased fire risk from the current multi-year drought. Local meteorology, extreme climate events, and ecosystem processes must be explicitly considered to develop effective mitigation and adaptation strategies.”

Stoked by dry desert air channeled through mountain passes and canyons, Santa Ana fires burn with more intensity, and they do their worst in a shorter period of time than summer fires. In a typical Santa Ana fire, half of the territory burned is consumed in the first day of the blaze. Examples of Santa Ana fires include the costly Cedar Fire in San Diego and dozens of others that burned in late October 2003.

Non-Santa Ana fires, by contrast, burn more slowly over more remote mountain areas. Non-Santa Ana fires, such as the Station Fire that scorched large portions of the San Gabriel Mountains in 2009, rely on hot temperatures and dried vegetation and woody debris that serves as a fuel source.

The spectre of climate change

Both types of fires are costly and damaging, but the researchers see change on the horizon.

“Warming in the summertime will be a big factor in increasing the number and size of non-Santa Ana fires,” said Hall. “Lower relative humidity during Santa Ana events resulting from climate change toward the middle of the century will lead to larger Santa Ana fires.”

Fire-prone regions also face increased competition during the summer for firefighting resources, such as air tankers, vehicles, and personnel.

“The large economic and human impacts of Santa Ana fires raises the question of whether more resources during the fall could be marshaled for suppressing these fires,” said James Randerson, Chancellor’s Professor of Earth system science at UC Irvine and senior author on the paper.

The researchers relied on NASA satellite data and decades’ worth of fire records from the California Department of Forestry and Fire Protection and the U.S. Forest Service.