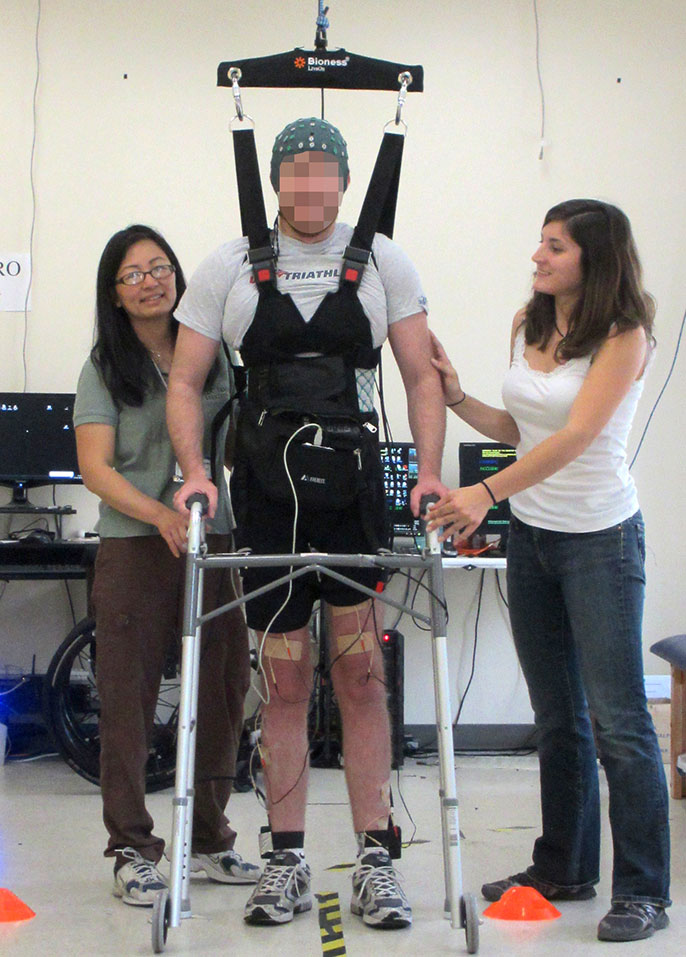 A man whose legs had been paralyzed for five years walks along a 12-foot course using UC Irvine-developed technology that lets the brain bypass the spinal cord to send messages to the legs.

Novel brain-computer interface technology created by University of California, Irvine researchers has allowed a paraplegic man to walk for a short distance.

In the preliminary proof-of-concept study, led by UCI biomedical engineer Zoran Nenadic and neurologist An Do, a person with complete paralysis in both legs due to spinal cord injury was able — for the first time — to take steps without relying on manually controlled robotic limbs.

The male participant, whose legs had been paralyzed for five years, walked along a 12-foot course using an electroencephalogram-based system that lets the brain bypass the spinal cord to send messages to the legs. It takes electrical signals from the subject’s brain, processes them through a computer algorithm, and fires them off to electrodes placed around the knees that trigger movement in the leg muscles.

Study results appear in the open-access Journal of NeuroEngineering & Rehabilitation. A video is available here.

“Even after years of paralysis, the brain can still generate robust brain waves that can be harnessed to enable basic walking,” said Nenadic, an associate professor of biomedical engineering. “We showed that you can restore intuitive, brain-controlled walking after a complete spinal cord injury. This noninvasive system for leg muscle stimulation is a promising method and is an advance of our current brain-controlled systems that use virtual reality or a robotic exoskeleton.”

Months of mental training to reactivate the brain’s walking ability and physical therapy were needed for the study participant to reach the stage where he could take steps. Wearing an EEG cap to read his brain waves, he was first asked to think about moving his legs. The brain waves this created were processed through a computer algorithm Nenadic had formulated to isolate those related to leg movement. The subject later was trained to control an avatar in a virtual reality environment, which validated the specific brain wave signals produced by the algorithm.

This training process yielded a custom-made system, Nenadic said, so that when the participant sought to initiate leg movement, the computer algorithm could process the brain waves into signals that could stimulate his leg muscles.

To make this work, the subject required extensive physical therapy to recondition and strengthen his leg muscles. Then, with the EEG cap on, he practiced walking while suspended 5 centimeters above the floor, so he could freely move his legs without having to support himself. Finally, he translated these skills to the ground, wearing a body-weight support system and pausing to prevent falls.

Since this proof-of-concept study involved a single patient, Do said, further research is needed to establish whether the results can be duplicated in a larger population of individuals with paraplegia.

“Once we’ve confirmed the usability of this noninvasive system, we can look into invasive means, such as brain implants,” said Do, an assistant clinical professor of neurology. “We hope that an implant could achieve an even greater level of prosthesis control because brain waves are recorded with higher quality. In addition, such an implant could deliver sensation back to the brain, enabling the user to feel his legs.”