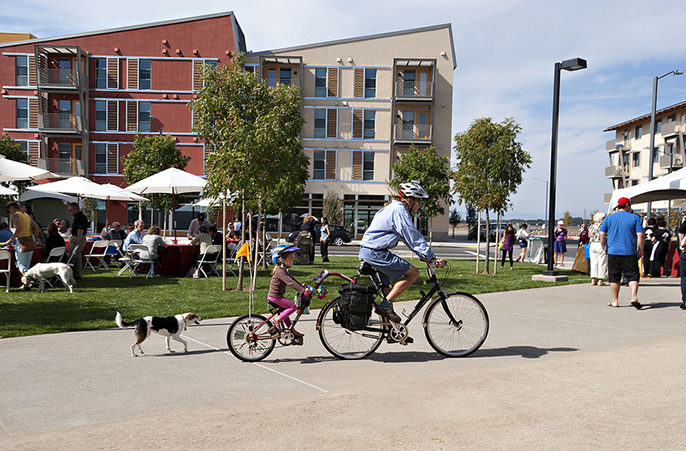 UC Davis West Village, the nation’s largest planned zero net energy community, continues to work toward its goal of producing 100 percent of the energy it uses.

A report released today (Sept. 30) by UC Davis and the West Village Community Partnership LLC said the community is 82 percent of its way toward reaching zero net energy, or ZNE. The analysis covers the time period between September 2013 and August 2014.

“The neighborhood is close to where we want it to be, but we still are not at the finish line,” said Sid England, assistant vice chancellor of the UC Davis Office of Environmental Stewardship and Sustainability. “I think we’re on track to get to 100 percent in the long-term. Along the way, we’ve learned some valuable lessons that we hope can inform other developments in California and across the country.”

Zero net energy is achieved when the community generates 100 percent of the energy it uses over the course of a full year. Neighborhoods and buildings are increasingly being designed and promoted as zero net energy, but whether they meet that goal can only be verified with real residents and businesses in place.

Since the complex first opened in 2011, additional apartments have been built, office and retail spaces have filled, tenant energy behavior has been studied, and energy use has fluctuated.

An analysis released in 2013 found that West Village produced 87 percent of the energy it consumed from March 2012 to February 2013. The primary difference between then and the new analysis is that formerly vacant retail and office space is now occupied.

The report shows West Village’s 4.1 megawatts of photovoltaic panels produced 102 percent of their expected energy.  However, this production was only 82 percent of the actual demand. Residential use accounted for 88 percent of the demand with 7 percent from commercial and office use, and 5 percent from the student center and maintenance facilities. Achieving zero net energy for West Village will depend on increasing photovoltaic production, reducing demand, or some combination of both, the report says.

Several actions have been taken to improve energy performance at West Village. These include:

Data analysis for the report was conducted by engineering firm Davis Energy Group.