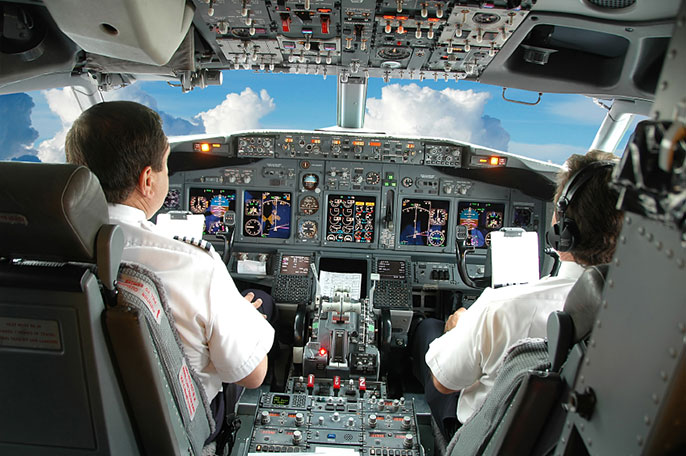 The challenges faced by airplane pilots charged with monitoring automated functions in the cockpit are the focus of a new study by UC Santa Barbara's Jonathan Schooler, a professor of psychological and brain sciences, and NASA research psychologist Steve Casner.

When a commercial jet crashed on landing in San Francisco, it was ultimately determined that the plane had slowed to an unsafe speed during approach — and no one in the cockpit noticed in time to prevent the accident.

With pilots assigned to monitoring aircraft position, speed, altitude and an array of other automated functions as they appear on a computer screen during flight, how could such a major lapse occur? Easily, suggests a new study, which posits that the nature of the task itself is a recipe for failure.

The NASA-initiated scientific examination paired its own research psychologist, Steve Casner, with Jonathan Schooler, a professor of psychological and brain sciences at UC Santa Barbara. Their results indicate that humans may be inherently bad at watching computers work — and that they’re unlikely to get any better, no matter how careful the selection or training.

The paper, “Vigilance impossible: Diligence, distraction, and daydreaming all lead to failures in practical monitoring task,” is published in the current issue of the journal Consciousness and Cognition.

“Our study really does suggest that vigilance is a very difficult task for people,” explained Schooler. “Extended uninterrupted monitoring can be draining. The antidote to that is interruptions that break up the monotony, but we also found that the interruptions themselves contributed to lapses. And people will spontaneously mind-wander, and that can also contribute to monitoring difficulties.

“So staring is draining, plus things come up which interfere with our ability to monitor, and our mind leaves the premises even when none of the other things are an issue,” Schooler added. “It’s a trifecta of things working against effective monitoring.”

Schooler, as mind scientist, and aviation psychologist and pilot Casner teamed up to examine why monitoring failures happen even among experienced and highly trained airline pilots. For their study, they asked 16 commercial jet pilots to monitor the progress of a simulated routine flight in which high levels of cockpit automation handled the tasks of navigating and steering the airplane.

Knowing that past experiments had shown monitoring — essentially sitting and staring at computer screens — to be a tiring process that quickly leads to fatigue and inattention, Casner and Schooler wanted to know how the pros do it: Did they have strategies to fend off the fatiguing effects of long watches?

An environment full of distractions

The researchers found that the cockpit environment is busy enough that pilots were often sidetracked by other tasks, such as talking to air traffic control or configuring the airplane’s systems, which curtailed fatigue. But they also discovered that these pop-up tasks could themselves cause pilots to miss important events during flight.

Most interesting, Schooler and Casner said, is what happened when the pilots weren’t interrupted. Rather than focusing solely on monitoring the flight, they instead created their own distractions by engaging in what the researchers call “mind wandering.”

When periodically asked, during the study, what they were thinking about, pilots admitted to thinking “task-unrelated thoughts” up to 50 percent of the time — mental excursions that frequently led to missed events in flight. All in all, the researchers found, pilots missed 25 percent of all altitude crossings they were charged with monitoring.

The pilots tried to limit their mind wandering to times when there were fewer demands on their attention, Schooler said, but ultimately found that even in circumstances with high demand they routinely mind wandered.

“We had anticipated that the longer people monitored that in itself would be associated with inferior performance, and we actually didn’t observe that particular pattern,” Schooler explained. “But we had failed to appreciate how the solution — the interruption — itself compounds the problem. We were also surprised at the sheer number of times that pilots missed the altitude callouts and the high frequency with which they admitted to mind wandering.

“We should be very wary of relying on people to serve in a monitoring capacity — especially now, when we do have technology that can fill the monitoring role,” he concluded.

Casner concurred, suggesting that real-world monitors may be caught between a continuous-vigilance approach that is doomed to fail, a dynamic environment that cannot be fully controlled and what may be an irresistible urge to let one’s thoughts drift.

“This task of watching over a computer system while it works is incredibly trying, if not impossible, for a human being to do well,” Casner said. “You can try paying attention, and you can try taking brief breaks, but sooner or later you’ll miss something important. This is a job for a robot, not a human being. It’s time to rethink the way we design these systems. Let the people do the stuff they are good at, and let the computers handle the mundane chores.”