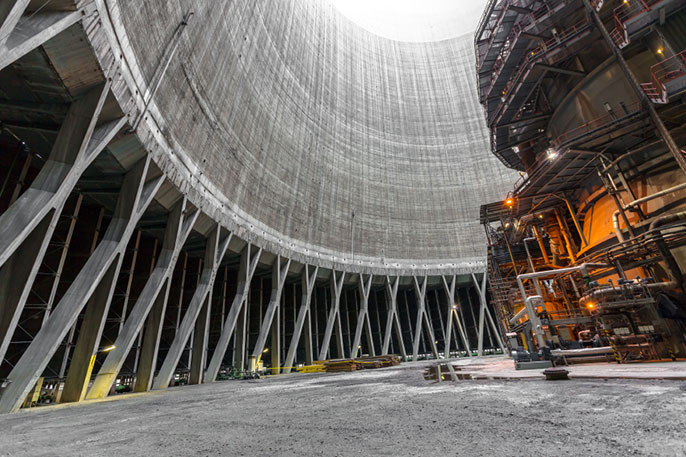 One of the goals of a new UC Berkeley-led research consortium, CERC-WET, is to reduce the amount of water used in thermal power plants, like the one shown.

The consortium, announced by the U.S. Department of Energy, is one of several technical tracks under the U.S.-China Clean Energy Research Center (CERC), which was launched in 2009 by President Barack Obama and former Chinese President Hu Jintao to accelerate the transition to an efficient, low‐carbon economy while mitigating the long‐term threat of climate change. The energy-water track was announced in November 2014.

“Addressing the impact of water resource scarcity and variability on energy systems in the U.S., China, and around the world will require collaborative efforts like CERC to develop technical solutions,” said Energy Secretary Ernest Moniz in a DOE press statement. “The U.S. consortium of university, nonprofit, industry, and national laboratory partners, led by the University of California, Berkeley, will leverage cutting-edge science and technology research capabilities to ensure our collective energy and water security.”

The bilateral investment in CERC-WET will total $50 million over five years. The DOE will provide $12.5 million of the funding, and the remaining U.S. partners will match that for a total of $25 million. The remaining $25 million will come from the Chinese Ministry of Science and Technology and its consortium partners.

CERC-WET is charged with building the foundation for the technologies and expertise that will position the United States and China to continue to thrive in a future with constrained energy and water resources.

CERC-WET will target water use reduction at thermoelectric plants; treatment and management of non-traditional waters; improvements in sustainable hydropower design and operation; climate impact modeling, methods, and scenarios to support improved understanding of energy and water systems; and data and analysis to inform planning and policy.

“The participation of five UC campuses and the Lawrence Berkeley National Laboratory in this consortium — and UC Berkeley’s and UCI’s leadership roles — is yet another testament to the reach and power of researchers across the UC system,” said UC President Janet Napolitano. “I’m proud of our public service through research.”

The CERC-WET principal investigator is Ashok Gadgil, Distinguished Professor of Safe Water and Sanitation at UC Berkeley’s Department of Civil and Environmental Engineering and deputy of research at Berkeley Lab’s Energy Technologies Area. Co-principal investigators of CERC-WET are Soroosh Sorooshian and Scott Samuelsen, both professors at UC Irvine’s School of Engineering.

“The selection of our team illustrates the University of California system’s leading role as a brain trust for the state,” said Gadgil. “This consortium is particularly timely as it comes in the midst of an unprecedented drought in California. We will be delivering important water technologies, data analyses and policies for the state, country and the world.”

“This is a great win. It’s an opportunity for California to further enhance the cooperation between California and China on the quest to develop innovations that will drive sustainable energy and climate solutions,” said Louis Stewart, deputy director of innovation and entrepreneurship at Gov. Brown’s Office of Business and Economic Development. “CERC is in alignment with goals set by the governor, who signed a cooperative agreement with China in April 2013.”