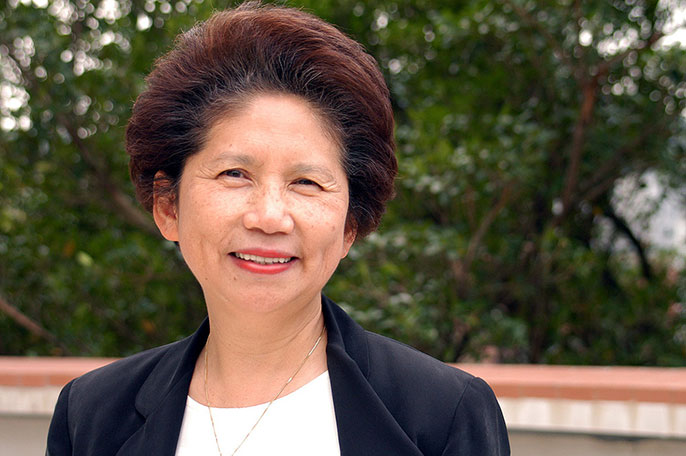 By the age of 4, Matthew Haemsch had undergone 16 rounds of chemotherapy and a surgery to remove a cancerous tumor on his adrenal gland.

Yet, his small body remained riddled with a rare pediatric cancer.

With no other treatment options left, Matthew’s doctors at St. Jude’s Children’s Research Hospital in Memphis recommended the family consider an investigational therapy under development at UC San Diego School of Medicine.

“We made six trips to San Diego in 18 months for six treatments of a drug we were told would boost Matthew’s immune system and help his body fight the cancer,” said Matthew’s mother, Charlotte Haemsch. “He’s been cancer-free ever since. I can’t say enough about Dr. Yu.”

Dr. Alice Yu, M.D., Ph.D., now a professor emerita at the UC San Diego School of Medicine, had already spent much of a decade developing the first targeted therapy for children like Matthew with neuroblastoma, a deadly cancer that strikes approximately 650 new children each year, usually before the age of 5.

This summer, after 30 years of laboratory and clinical research, the experimental immunotherapy treatment used on Matthew became commercially available for the first time.

“We’ve got some spectacular news. Really, really big news,” wrote the non-profit St. Baldrick’s Foundation, which has provided funding for Yu’s research, in a press release celebrating the FDA’s approval of the drug. “In the last 20 years, only two new drugs have been approved that were specifically developed to treat children with cancer. … Now there are three.”

The drug that saved Matthew’s life is called Unituxin.

Neuroblastoma is a cancer arising in the immature nerve cells that form the sympathetic nervous system, which controls body functions such as heart rate, blood pressure and digestion. Despite aggressive treatment strategies that include surgery, radiation, chemotherapy and bone marrow transplants, most children diagnosed with late-stage neuroblastoma succumb to the disease.

“When I was in medical school, the impression was that every child with cancer died,” Yu said. “During my residency training, I witnessed an era of rising survival in leukemia but not neuroblastoma patients. That was the lure.”

She began working on a new treatment for neuroblastoma with colleague Ralph Reisfeld, Ph.D., now a professor emeritus at the Scripps Research Institute, in the mid-1980s.

“By the late 1980s, we had begun our first clinical trial,” said Yu, who joined UC San Diego in 1978 and has since mentored more than 50 doctoral and medical students. “Our encouraging results led to a multicenter phase II trial. But after the initial drug supply was exhausted, we could not find a pharmaceutical company willing to make it.”

Though neuroblastoma is the most common cancer afflicting infants less than a year old, it is still a rare “orphaned” disease.

“I flew to Washington, D.C., with a suitcase full of X-rays and pathology slides from patients in the early-stage trials,” she said. “A panel of experts examined the evidence and recommended that the National Cancer Institute support the continued development of this new drug and produce the drug for a national phase III clinical trial.”

Specifically, in a 2010 study in the New England Journal of Medicine, Yu and colleagues showed that 66 percent of patients who received the immunotherapy were cancer-free two years later, compared with 46 percent among those who received standard therapy alone.

“This is highly significant, compared to many new therapeutics approved for adult cancer, which may be approved on the basis of prolonging survival for two to three months only,” Yu said.

“Yu should really be recognized for her accomplishment in bringing a new drug to market, without the usual support of a big pharma,” said Ayse Batova, Ph.D., a project scientist in the Department of Pediatrics, Hematology/Oncology.

Most immunotherapy drugs target proteins. Unituxin is the first to target a sugar—an important advance because of its implications for widening the net of potential pharmaceutical targets.

“GD2 is also expressed in melanoma, small cell lung cancer, glioblastoma and some sarcomas,” Yu said. “We believe GD2-targeted therapy may have therapeutic potential for these cancers as well. I am helping to develop a trial of anti-GD2 in osteosarcoma within the Children’s Oncology Group.”

Quest for a gentler Unituxin

Yu and Diccianni are also now tackling the downside of the drug — its potentially painful side-effects.

“To avoid such side-effects, I am developing a GD2 vaccine which can stimulate patients to make their own anti-GD2 at a much slower and steady rate, below the threshold of triggering the side effects, based on a preliminary study,” she said.

The UC San Diego team is also working to fast-track an improved Unituxin-based treatment — a one-two punch that combines Unituxin with another already approved FDA drug. The drug combo shows promise in both further reducing rates of cancer re-occurrence and lessening painful side effects in animal models.

“I keep thinking of all the other Matthews out there,” Haemsch said, responding to news that Unituxin would become commercially available in July. “He’s 28 now. Our family is so grateful to Dr. Yu and UC San Diego.”