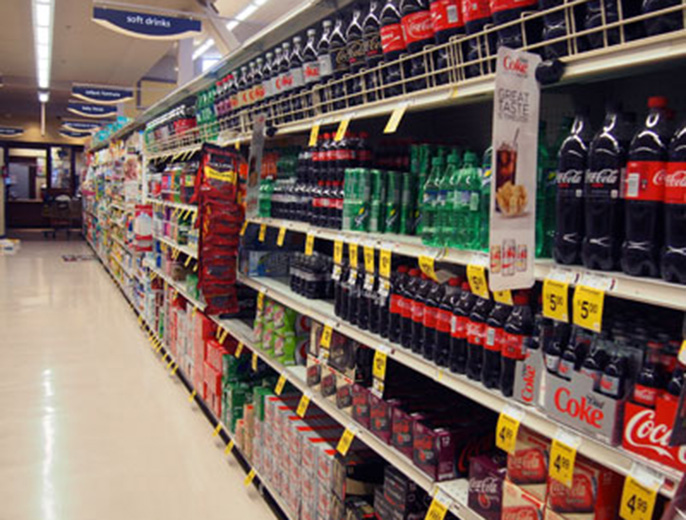 A new study finds that Berkeley’s soda tax led to higher retail prices of sugary drinks sold in the city.

Not long after Berkeley became the first city in the country to levy an excise tax on sugar-sweetened beverages, questions arose about whether the move would have its desired effect by increasing the retail price of soda. The latest signs, coming from a new study by UC Berkeley researchers, say yes.

The findings, published today (Oct. 7) in the American Journal of Public Health, come nearly a year after Berkeley voters approved an excise tax of one cent per ounce on sugary drinks. Unlike a sales tax, which is paid by consumers at the register, an excise tax is levied before the point of purchase, potentially leading to higher retailer prices, so buyers are more aware of the higher cost before they pluck the beverage from store shelves.

These new study results differ from those of a working paper on Berkeley soda prices published in August, which suggested that a smaller proportion of the tax was passed through to the retail price of soda.

“No one knew how retailers would deal with the added costs of the tax,” said study lead author Jennifer Falbe, a UC Berkeley postdoctoral researcher in public health nutrition. “Increasing the price of sugary drinks is a critical first step in discouraging consumption, so it’s incredibly encouraging that we’re seeing pass-through of the tax to higher retail prices so early after implementation. We expect higher price increases in the future as small business owners learn more about the tax.”

To establish a baseline comparison, researchers collected data on most beverage prices in fall 2014, before the soda tax was passed. They not only looked at stores in Berkeley, but also included retailers in Oakland and San Francisco to account for other factors that may affect prices regionally.

Data were collected again three months after the tax went into effect. The researchers found that in Berkeley, soft drink prices increased by about seven-tenths of a cent more per ounce than in other cities. Given the tax was 1 cent per ounce on distributors of sugar-sweetened beverages, this means that about 70 percent of the tax was passed through to the retail price. Fruit-flavored drinks, including cranberry cocktail and lemonade, saw a slightly smaller increase of about half a cent per ounce. For all categories of sugar-sweetened beverages, the overall price increased about half a cent per ounce.

The researchers also looked at the price of non-sugary beverages, which did not change more in Berkeley than in comparison cities during the study period.

These study results differ from those of a working paper on Berkeley soda prices published in August, which suggested that a smaller proportion of the tax was passed through to the retail price of soda.

The differences between the results from this new UC Berkeley research and the earlier working paper may be due to when and how stores were sampled in the two studies, Falbe said. Also, the UC Berkeley study distinguished between retail store types. The price of sugary beverages changed little at chain drugstores but more at supermarkets.

“This is important because most Americans do their primary grocery shopping at supermarkets,” said Falbe.

The study comes as other cities around the country are considering their own soda tax measures. But even with the limited success of getting such “sin taxes” passed, sales of soda, particularly the full-calorie versions, have been experiencing a steady decline over the past decade.

According to a youth survey by the Centers for Disease Control and Prevention, the percentage of high school students reporting consumption of soda in the prior week dropped from 33.8 percent in 2007 to 27 percent in 2013.

She noted that when Berkeley established a general tax on sugary beverages, it also established an expert panel to make recommendations on funding efforts to reduce obesity and sugar-sweetened beverage consumption. The Berkeley City Council has already allocated funds to support the Gardening and Cooking Program in the Berkeley Unified School District.

Other co-authors of the paper are Nadia Rojas, a research associate at UC Berkeley’s School of Public Health, and Anna Grummon, a global public health graduate student at the University of North Carolina.

The Global Obesity Prevention Center at Johns Hopkins University, the National Institute of Child Health and Human Development, and the University of California Office of the President helped support this research.