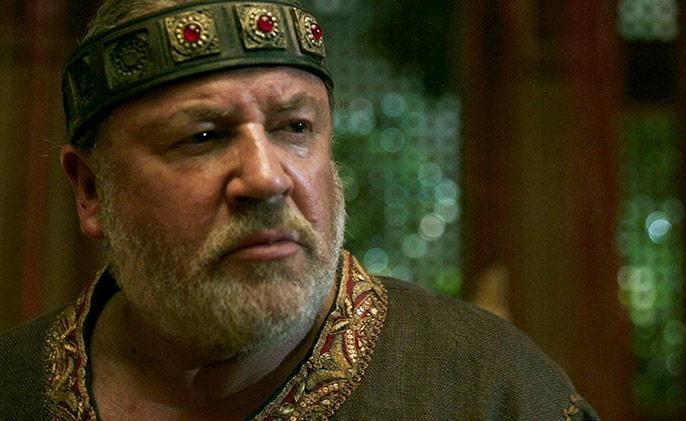 UC Riverside's Reza Aslan and Robin Russin are among the major contributors bringing 'Of Kings and Prophets' to television.

A television drama developed by Robin Russin and Reza Aslan, professors in the M.F.A. in Creative Writing and Writing for the Performing Arts program at the University of California, Riverside, will air on ABC this fall.

“Of Kings and Prophets” is a one-hour series based on the biblical story of King Saul, the first king of Israel; David, who became the second king of Israel; and the prophet Samuel. It will air Sundays at 10 p.m.

The show, one of five dramatic series ABC picked up, began as a collaboration between Robin Russin, professor of screenwriting, and Aslan’s media company, BoomGen Studios. Aslan is a professor of creative writing. Russin wrote the submission pilot script and will remain on the project as a consultant. Aslan developed the concept and is an executive producer along with Jason Reed and Mahyad Tousi.

ABC describes the series as “an epic Biblical saga of faith, ambition and betrayal as told through the eyes of a battle-weary king, a powerful and resentful prophet and a resourceful young shepherd on a collision course with destiny.”

“King David is revered by more than half the population of the entire planet,” Aslan said. “He’s the world’s first rock star. His kingdom marks the high point of Israel’s history. And yet he was deeply flawed, vain, vengeful and lustful. He killed his friends and betrayed his wives. But he loved God and God loved him, so much so that He gave him a nickname. He called him ‘Beloved.’ His blood coursed through the veins of Jesus Christ. But few people know the actual story of his rise to power.”

Aslan also will host “Believer,” a television series that will debut on CNN in 2016. CNN describes the show as a “spiritual adventure series” in which Aslan “will immerse himself into one of the world’s most fascinating faith-based groups to experience life as a true believer,” CNN said in announcing the series on March 10. “The series will feature Aslan participating in endurance worship, spellbinding rituals, and unusual rites of passage to learn about rarefied worlds that have been molded by faith and tradition.”

He holds a B.A. in religion from Santa Clara University, where he was Phi Beta Kappa and wrote his senior thesis on “The Messianic Secret in the Gospel of Mark” ; a Master of Theological Studies from Harvard in world religions; an M.F.A. from the highly acclaimed Writers’ Workshop at the University of Iowa; and a Ph.D. in the sociology of religion from UC Santa Barbara.

Russin has written, produced, consulted and directed for numerous film, TV and theatre productions, including the box office hit “On Deadly Ground,” “America’s Most Wanted” on Fox, and “Vital Signs” on ABC, where he was senior producer. He co-authored “Screenplay: Writing the Picture,” now in its second edition, and “Naked Playwriting” (both published by Silman-James Press). Lew Hunter, co-chair of UCLA’s screenwriting department, called “Screenplay” the “best book about screenwriting and being a screenwriter ever written.” His full-length play, “The Face in the Reeds,” recently premiered in an extended run in Santa Monica, and is now in development for production in New York.

Russin earned a B.A. from Harvard College, B.A. and M.A. degrees from Oxford University, an M.F.A. from the Rhode Island School of Design, and an M.F.A. from UCLA.