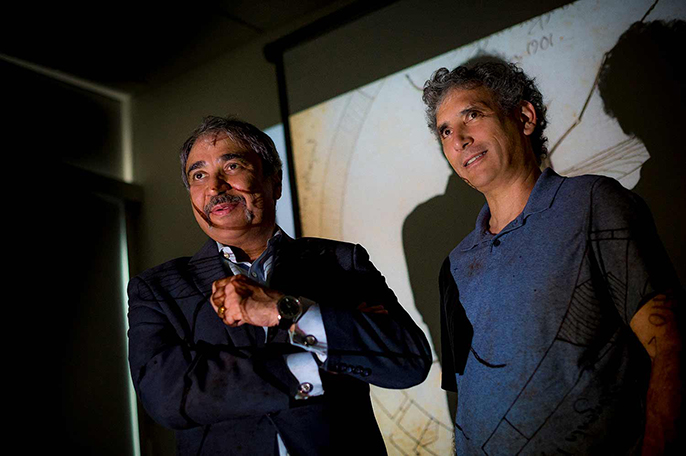 UC San Diego has received a $70 million commitment from the India-based philanthropic Tata Trusts, which includes the Sir Dorabji Tata Trust, the Sir Ratan Tata Trust and the Tata Education and Development Trust, to establish the Tata Institute for Active Genetics and Society (TIAGS), a collaborative partnership between the university and research operations in India. UC San Diego, which will be home to the lead unit of the institute (TIAGS-UC San Diego), will receive $35 million in funding, while the remainder of the committed funds is anticipated to support a complementary research enterprise in India (TIAGS-India).

The goal of the Institute is to push the boundaries of bioscience in support of human needs and society, and to build scientific capacity in India. The Institute will specifically advance global science and technology research to ultimately find solutions to address some of the world’s most pressing issues, ranging from health care to agriculture.

“As one of the of the world’s top research institutions, we are committed to the global good,” said UC San Diego Chancellor Pradeep K. Khosla. “This international collaboration to establish the Tata Institute for Active Genetics and Society will spark new scientific research and discoveries that will ultimately help us tackle some of the biggest challenges that face humankind in a socially conscious and ethical manner.”

UC San Diego, which is ranked among the top 15 universities in the world, will match the gift to create 10 endowed chairs, designed to attract and retain top scientists and faculty focused on research that aligns with the Institute’s goals.

“UC San Diego’s mission to advance society and drive economic impact aligns with our goals, as a country, to build a skilled scientific workforce and to grow the impact and scope of our research enterprise,” said Ratan Tata, chairman, Tata Trusts. “Together, we will promote bioscience research, discoveries and education that will benefit populations around the globe.”

The initiative’s inaugural basic research enterprise — a thrust in active genetics — will be focused on applications of “active genetics” to improve human health and agriculture. Developed at UC San Diego, active genetics is a new field of genetics that incorporates a novel method, called “gene drive,” for generating mutations in both copies of a gene in a single generation. Research efforts spearheaded by the Tata Institute for Active Genetics and Society will require and foster partnerships with scientific colleagues and government agencies in both India and the United States.

“Recent discoveries in genetics have created a new understanding of genes—not only just what they are or how they work, but also how they change or can be altered,” said Ethan Bier, professor of biology at UC San Diego and Paul Allen Foundation Distinguished Investigator, who has pioneered the field of active genetics with UC San Diego postdoctoral fellow, Valentino Gantz. “This understanding, combined with novel technology of gene editing, has opened new areas for exploration that have potential applications in areas ranging from new health therapies, to prevention of the spread of disease, to agriculture uses.”

One of the objectives of the institute’s research efforts will be to develop strains of mosquitoes that are unable to propagate malarial parasites, Bier said. This effort, currently underway in collaboration with Anthony James, Distinguished Professor of Microbiology and Molecular Genetics at UC Irvine, could lead to the development of an effective way to combat vector-borne diseases, including malaria, a debilitating disease that afflicts hundreds of millions of people in tropical regions around the world. The researchers at UC San Diego and its partner institute in India also plan to apply active genetic technology to improve crops, enable new forms of cell therapy and develop ways to control microbial pathogens.

In addition to a thrust in active genetics, the institute will also include a parallel thrust in society and ethics, which will leverage UC San Diego’s expertise in health, policy and economics, and ethics, and link Indian experts with larger research and education initiatives to effect societal progress. An important goal of this thrust will be to provide ethical guidance for the research activities in bioscience and the application of new technologies developed from the research in efforts to improve human health, agriculture and the environment. That will involve bringing researchers in India together with scholars from UC San Diego in the humanities and social sciences, such as Anita Raj, who directs the UC San Diego Center on Gender Equity and Health; Karthik Muralidharan, a development economist whose research areas include education, health, social protection, program evaluation and service delivery; and Craig Callender, whose work focuses on environmental ethics.

Leveraging cross-national, joint training opportunities to prepare future generations of scientific leaders in biotechnology and life sciences, the innovative binational structure of the Tata Institute for Active Genetics and Society will streamline the building of scientific capacity and transfer of knowledge and technology to India. It will also serve to advance the biotechnology sector in India and establish a model for other global scientific endeavors.

Suresh Subramani, Distinguished Professor of Biological Sciences at UC San Diego, will be the inaugural director. “It is an honor to lead an institute of such significance to both UC San Diego and to India,” he said.

The institute will also host annual opportunities to meet and discuss ground-breaking genetics technologies, as well as to address safety, efficiency and ethics conversations around emerging fields of genetics. Annual symposia are planned in India to consider discoveries, opportunities and challenges for the future.

The collaboration with the Tata Trusts is an honor for UC San Diego. “Growing up in India, I looked up to the Tata family as champions of philanthropy for the human good,” Khosla said. “The Tata family’s impact to bring about societal change and to build the country’s infrastructure has been immeasurable. When Mr. Tata visited with researchers at UC San Diego, he was immediately drawn to the impact of the science and its strong linkages to bettering human society. It’s a powerful partnership with unlimited potential to improve the world.”

Tata Trusts is amongst India's oldest, non-sectarian philanthropic organizations that work in several areas of community development. Since its inception, Tata Trusts has played a pioneering role in transforming traditional ideas of philanthropy to make impactful sustainable change in the lives of the communities served. Through direct implementation, co-partnership strategies and grant making, the Trusts support and drive innovation in the areas of education; healthcare and nutrition; rural livelihoods; natural resources management; enhancing civil society and governance and media, arts, crafts and culture. Tata Trusts continues to be guided by the principles of its founder, Jamsetji Tata, and through his vision of proactive philanthropy, the trusts catalyze societal development while ensuring that initiatives and interventions have a contemporary relevance to the nation. For more information, please visit: www.tatatrusts.org.