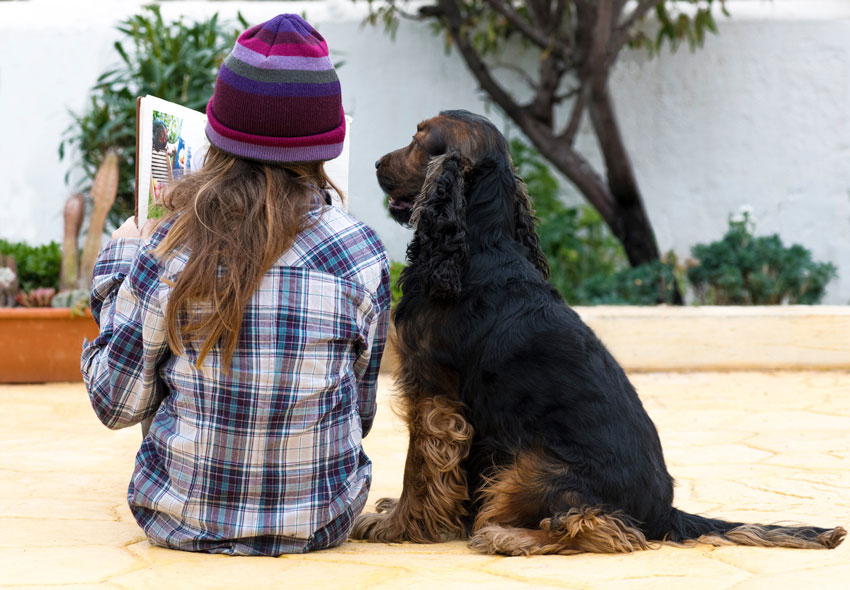 UCI Health child development specialist Sabrina E.B. Schuck — long concerned about the lack of treatments for children with attention-deficit/hyperactivity disorder (ADHD) — decided to seek therapies besides medications to calm and help them focus.

In a first-of-its-kind randomized trial, Schuck and her colleagues discovered that therapy dogs are effective in reducing some of the symptoms of ADHD in children. At least 5 percent of U.S. children are diagnosed with ADHD.

Schuck, who holds a doctorate in education and a master’s degree in clinical psychology, is an assistant professor of pediatrics and executive director of the UCI Health Child Development Center.

Beyond ADHD, her research interests include the human-animal bond and school-based interventions. Her team’s research was recently published in the American Psychological Association’s Society of Counseling Psychology’s Human-Animal Interaction Bulletin.

What made you think therapy dogs could help children with ADHD?

There is a lot of anecdotal evidence about the effectiveness of therapy dogs. Our founding school program director brought a therapy dog, Teddy, to school every day. Others have studied child development and the human-animal bond, but until recently, there were no large or randomized and controlled trials.

Adapting those studies to ADHD work done here at UCI over the past two decades, we proposed a complex clinical trial to see if animals like Teddy make a difference for these children.

Whom did you study and how did the study work?

Over five years, we looked at seven cohorts of 12 children — a total of 88, ages 7 to 9 — who’d been diagnosed with ADHD. None had started medication. All received “dog-themed” psychosocial skills-based training and coaching on how to care for and be safe around a dog. Their parents also received behavioral training. But only half the children actually worked with the dogs.

How did the children interact with the dogs?

During two weekly sessions, kids had semi-structured time to bond with the dogs. They rotated among separate activity stations, throwing a ball or Frisbee, grooming the dogs, working with them on agility or other activities. Children then participated in didactic lessons to build social skills. Whenever the kids contributed to the sessions, they were rewarded by being able to sit or lie down next to the dog. They also wrote letters and stories to the dogs, and on Saturdays they practiced dog-training techniques.

Didn’t the dogs distract the children?

On the contrary, it takes a lot to engage kids who are hyperactive when doing activities they don’t necessarily prefer. Working with the dogs seems to motivate children to participate in tasks they would otherwise avoid.

How long did the study last?

Each cohort was studied for 12 weeks of treatment, then again six weeks later. For the first nine weeks, the groups with therapy dogs learned how to train the animals. In the last three weeks, the kids created their own lesson plans to teach basics like sit, stay and come. Then they tried to train puppies, a task that requires considerable patience and self-control.

What did your study find?

Children who interacted with the dogs experienced a reduction in inattention and improvements in social skills and self-esteem when compared to the groups without dogs. There was no effect, however, on hyperactivity and impulsivity. We saw the same results in a follow-up measurement six weeks after the interaction with the dogs ended. These findings are important because hyperactivity and impulsivity tend to decline with age, while problems with attention tend to persist through life and are the most challenging to treat.

Can this intervention take the place of medication?

I would never say that kids always need medicine or don’t need it. Medications are very effective at reducing symptoms for many children with ADHD. But we also need to learn who benefits from animal-assisted interventions and how we can measure its effectiveness with or without medicine.

What’s next for the program?

We want to understand who benefits from these strategies most and why. We also want to examine how to feasibly implement animal-assisted interventions, particularly in schools, to complement or provide alternatives to other therapies we know work.

Our main goal is to see how we can safely and effectively implement this program to help motivate children to learn and participate in school.

What surprised you about this study?

This project was so much fun. I loved seeing kids lined up at the school gate right on time because they couldn’t wait to get in to start therapy. The children in the dog groups were always on time.