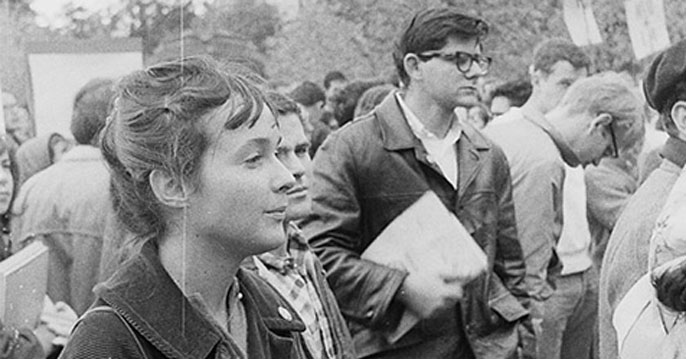 Alice Waters as a student at UC Berkeley, left, and more recently. After transferring to UC Berkeley in 1964, Waters became active in the Free Speech Movement. “It was very, very important that we stood together and created this world together,” she said in an interview.

“Reluctant” isn’t a word often associated with the celebrated food icon and activist. But when it came to her new book, the third and final installment in a contract, she considered giving the money back and forgoing the project altogether. “I didn’t feel like I had something really to say,” she said in a phone interview.

But she talked to her agent, who offered encouragement, and secured help from a longtime friend, as well as a young writer who would take dictation (Bob Carrau and Cristina Mueller, respectively).

The result is an honest memoir, out Sept. 5, which offers an intimate account of Waters’ early life.

By writing it, she said, she “hoped to empower the counterculture of this country.” (The memoir’s title? “Coming to My Senses: The Making of a Counterculture Cook,” fittingly.)

In the book, Waters revisits a broad range of experiences, including her activism as a student at UC Berkeley during the heyday of the Free Speech Movement. And on Thursday, Waters will read from the memoir at the Free Speech Movement Café at Moffitt Library, on the campus where that movement was born. The event will include a conversation between Waters and her friend Steve Wasserman, who runs Heyday Books, and a book signing.

Waters’ connection to UC Berkeley runs deep. In fact, the alum (she graduated in 1967 with a degree in French cultural studies) still has a presence on campus. In 2001, The Bancroft Library celebrated the acquisition of historical documents and photos from her revolutionary restaurant at 1517 Shattuck Avenue.

“I was very honored when they asked for the papers,” she said. “I feel like I am forever part of that space.”

Waters’ journey at UC Berkeley began in 1964, when she transferred here from UC Santa Barbara.

“(Savio) always seemed to see the big picture,” she said. “It wasn’t just about stopping the war in Vietnam. He was speaking about coming together and sharing values. … It was very, very important that we stood together and created this world together.

And it was from the influence of that world that Chez Panisse was born. Not long after she graduated from UC Berkeley, the restaurant first opened its doors.

The restaurant went on to inspire countless restaurateurs to adopt the “farm-to-table” approach. And Waters’ influence extends beyond her “little French restaurant.” Waters has championed free, sustainable, healthy school lunches for students; the importance of an edible education; and, famously, the creation of an organic garden at the White House.

Is she happy that First Lady Melania Trump vowed to keep the garden going under the new presidential administration?

“Any good news about the garden is good,” she said. “That’s all I can say.”

With wide-ranging acclaim and accomplishments, does she consider herself primarily a chef or an activist?

“Yes, I’m a chef … because I can run a kitchen. But it’s always been a cooperation, (and) we, hopefully, create something that’s better than the sum of the parts.

“No question I’m an activist.”

But her story isn’t just about activism and food.

After all, no memoir about 1960s counterculture would be complete without the drugs.

Waters used acid only once, she said — knowingly, that is.

“One other time they spiked the punch at a wedding, and we all lay on the back lawn of the house where the wedding was held,” she said, “and there was the most glorious sunset.”

“Certain things made sense to me that hadn’t before,” she said. “In that sense, it was life-changing.”

It also was “utterly shocking,” she said.

“I never did it again,” she added.

“I’ve always been a wine person.”

All are welcome to attend the event (Free Speech Movement Café, Moffitt Library, 6 p.m. Thursday). No ticket is required, and seating is limited.