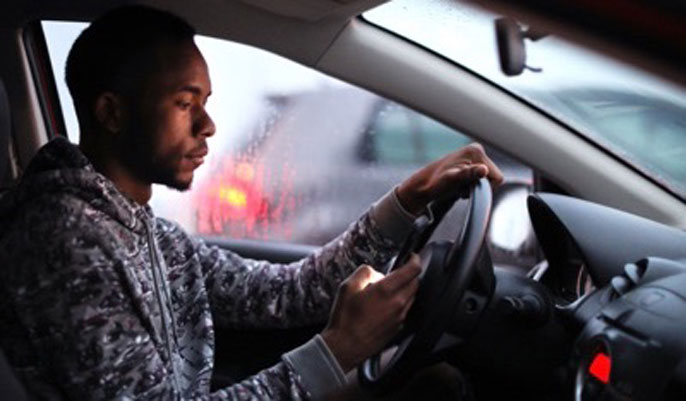 A new survey of app-based ride-hailing and food and grocery-delivery workers in San Francisco underscores the financial vulnerability of workers in the gig economy — and the coronavirus has made their plight much worse, according to findings released today (Tuesday, May 5) by researchers at the University of California, Santa Cruz.

The baseline survey reveals a workforce that is 56 percent immigrant, mostly male, and that struggles to make ends meet, with many relying on public assistance despite working an average of 40 hours per week. Since the pandemic, the online survey revealed, more than half have lost 75-100 percent of their income. The findings were published in a report titled, “On-demand and on-the-edge: Ride-hailing and Delivery Workers in San Francisco.”

“This is an incredibly vulnerable workforce, and many were just on the edge before the coronavirus crisis,” said lead researcher Chris Benner, a professor of environmental studies and sociology and the director of the Institute for Social Transformation at UC Santa Cruz. “The crisis has put them over the edge. Because of their employment status, they fall through a lot of cracks in the relief packages that have been approved by the state and federal governments.”

The initial survey was conducted over six weeks from February 1 through mid-March. Survey takers recruited participants through the apps themselves by hiring workers and asking if they'd like to participate. The 20-minute survey was administered in person, and those who participated received a $20 gift card. The response rate was 70 percent among ride-hailing workers and 15 percent among food-delivery workers.

The outbreak of the coronavirus crisis prompted the research team to pivot to an online survey, which was conducted the second and third weeks of April. Participants were recruited through organized networks, including closed Facebook groups, and a total of 219 app-based workers responded.

“We surveyed the same workforce at two different points in time,” said Benner. “The first gives us a picture of these workers under normal work circumstances, and the second is a snapshot of the impacts of COVID on this workforce.”

Full-time work but not enough to get by:

The baseline survey, which reached 407 ride-hailing workers and 236 food-delivery workers, revealed a workforce on the margins:

21 percent of participants have no health insurance, and another 30 percent depend on public insurance sources, such as Covered California or Medi-Cal
15 percent receive some form of public assistance, including 13 percent of food-delivery workers who depend on food stamps
45 percent report they could not handle a $400 emergency expense without borrowing money

Half the participants report working 40 or more hours per week in app-based work, and nearly 40 percent have worked more than two years for their “survey app” — the app they were working on when recruited for the survey.

“This is not a ‘gig.’ This is full-time work for the majority of these workers,” said Benner. “More than one-third are supporting children and nearly half are supporting other adults.”

Respondents reported median weekly earnings of $900 for ride-hailing workers and $500 for food-delivery workers, but those earnings drop considerably when adjusted for expenses such as gas, vehicle service, and cleaning. And the gap between workers' own estimates of expenses, compared to per-mile expenses allowed by the IRS, is considerable: When using the IRS estimates, fully 21 percent of workers net zero for their labor, said Benner.

“We estimate that twenty percent of ride-hailing workers are actually losing money to drive, when you account for all of their expenses,” said Benner.

Impacts of the coronavirus pandemic

Preliminary findings of the online survey, including the drop in income, were shared with the San Francisco Local Agency Formation Commission (SF LAFCo), which commissioned the baseline survey, on April 21.

“With the shelter-in-place order in effect, ride-hailing workers were earning a fraction of what they'd made in February, but these workers were living on the edge financially already, so anything they can bring in is necessary,” said Benner.

The coronavirus crisis prompted 18 percent of surveyed ride-hailing workers to shift to food delivery, but the biggest impact was on those who were not working at all: 24 percent had stopped working by mid-April, for fear of contracting the virus or other reasons.

Because app-based companies continue to classify their workers as independent contractors, despite the passage in 2019 of California Assembly Bill 5 designed to make them employees, workers are not typically able to access unemployment benefits. Although the federal CARES Act expanded eligibility to some independent contractors, app-based workers have trouble providing the required documentation of their previous earnings, said Benner.

The two-pronged survey results shed light on the needs of app-based workers, particularly in a city like San Francisco, which has some of the most progressive fair-labor standards in the country, said Benner. “These workers need and deserve greater economic security,” he said.

Policymakers must ensure that city and state employment laws are enforced, including minimum wage laws, and that ride-hailing and delivery workers have access to health insurance and unemployment benefits, said Benner. He added that the pandemic has exposed a need for improved safety and health protection of workers and paid sick leave, as well as stronger public health protections.

Meanwhile, owners of app-based companies are backing a ballot initiative that would exempt them from employer regulations. “At a time when these companies should be providing sanitizer, gloves, masks, and information about how to prevent the spread of the virus, they haven't been, because that would undermine their claim that these workers aren't their employees,” said Benner. “Food and grocery delivery has been deemed essential work, and these workers are putting themselves at risk, but they are not getting adequate support or protection.”

Assessing workers in the gig economy

The surge of app-based workers has raised questions about their well-being, their relationship to the companies they work for, and the future of the labor force. The baseline survey is among the most robust efforts to assess the circumstances of ride-hailing and grocery and meal-delivery workers.

“A survey like this is extremely rare, because it's expensive and labor-intensive,” said Benner. “We paid the surveyors and the cost of the ride and meal, regardless of whether the worker was willing to participate in the survey.” Benner acknowledged support from the San Francisco Foundation, ReWork the Bay, the Ford Foundation, the Annie E. Casey Foundation, Chavez Family Foundation, and SF LAFCo.

The survey was administered by UC Santa Cruz in partnership with San Francisco Jobs With Justice, Jobs With Justice Education Fund, and the Driver’s Seat Cooperative. SF LAFCo commissioned the research. “This is a true example of community-engaged scholarship,” said Benner.