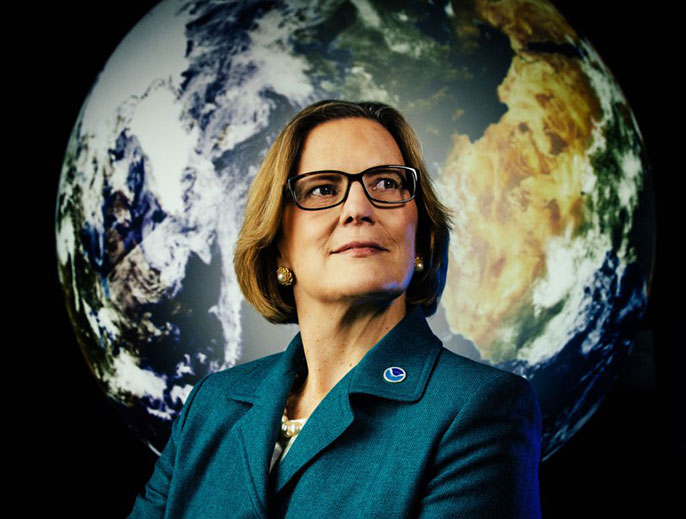 UC Santa Cruz alumna Kathryn Sullivan is featured on Time magazine's 2014 list of the '100 Most Influential People in the World.'

UC Santa Cruz alumna Kathryn Sullivan, a former astronaut who is now the administrator of the National Oceanic and Atmospheric Administration (NOAA), is featured on Time magazine's 2014 list of the "100 Most Influential People in the World." Sullivan was confirmed by the U.S. Senate in March to lead NOAA as under secretary of commerce for oceans and atmosphere.

"There may be no better way to appreciate the earth than to leave it, to look back on the beauty and fragility of our planet from the vantage point of space. Only a tiny fraction of humanity gets that opportunity, so when someone does — and also happens to be one of the smartest people around when it comes to Earth sciences — it’s good to have her on our side, especially in challenging times," Glenn wrote. He added, "The planet is suffering increasingly severe upheavals, at least partly a result of climate change — droughts, floods, typhoons, tornadoes. I believe my good friend Kathy is the right person for the right job at the right time."

Sullivan graduated from UC Santa Cruz in 1973 with a bachelor's degree in Earth sciences. An accomplished oceanographer, she earned a Ph.D. in geology at Dalhousie University in Canada. She was appointed NOAA's chief scientist in 1993 and later served a decade as president and CEO of the Center of Science and Industry in Columbus, Ohio, and was the inaugural director of the Battelle Center for Mathematics and Science Education Policy at Ohio State University.