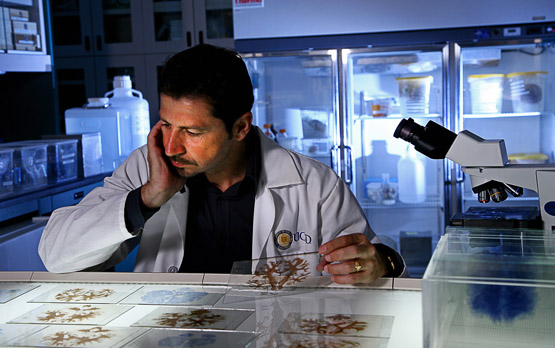 During his lifetime, Henry G. Molaison (H.M.) was the best-known and possibly the most-studied patient of modern neuroscience. Now, thanks to the postmortem study of his brain, based on histological sectioning and digital three-dimensional construction led by Jacopo Annese, Ph.D., at the University of California, San Diego, scientists around the globe will finally have insight into the neurological basis of the case that defined modern studies of human memory.

The microscopic anatomical model of the whole brain and detailed 3D measurements of the medial temporal lobe (MTL) region are described in a paper to be published online in Nature Communications on Jan. 28.

H.M. was an epileptic patient whose severe and almost total amnesia was the unexpected result of a bilateral surgical ablation of the MTL, including the hippocampus, in 1953. Until his death in 2008, the purity and severity of H.M.'s memory impairment, along with his willingness to participate in continual testing, made his case uniquely influential.

While his intellectual abilities, personality, language and perceptual skills remained intact, he was unable to store information in long-term memory. After his brain operation, H.M. was profoundly impaired in forming new declarative memories. This unfortunate outcome became the catalyst for over 50 years of scientific discoveries (and thousands of publications) that have radically changed scientists' basic understanding of memory function. His case was significant because it provided the first conclusive evidence for the involvement of the hippocampus in forming new memories.

In December 2009, Annese and his team dissected H.M.'s brain into 2,401 thin tissue slices that were then preserved cryogenically in serial order. While the brain was being sliced, the researchers collected an unabridged series of digital images of the surface of the block, corresponding to each tissue section. These images were archived and used to create a three-dimensional microscopic model of the whole brain. The model of H.M.'s brain contains clues to help understand the surgery performed in 1953, and the level of sampling and image quality afforded by this study represents a significant advance over the MRI scans performed with H.M. when he was alive.

"Our goal was to create this 3-D model so we could revisit, by virtual dissection, the original surgical procedure and support retrospective studies by providing clear anatomical verification of the original brain lesion and the pathological state of the surround areas of H.M.'s brain," Annese said. But the study reveals a small, circumscribed lesion in the left orbitofrontal cortex that had been previously undiscovered, showing the power of the technique. Based on the 3-D geometry of the lesion and the type of the lobectomy that was performed in 1953, Annese thinks this lesion was very likely created by Scoville during the surgery.

The findings reported in Nature Communications constitute new evidence that may help scientists today understand more fully the consequences of H.M.'s operation in the context of modern knowledge on memory of the functional anatomy of the hippocampus.

Annese and his team at UCSD also created a web-based atlas of H.M.'s brain, meant to support collaboration and preserve an archive of anatomical images relative to the case. The atlas contains structural delineations and digitized versions of the stained histological slides that can be viewed at the cellular-level using Google maps, a level of detail not seen before.