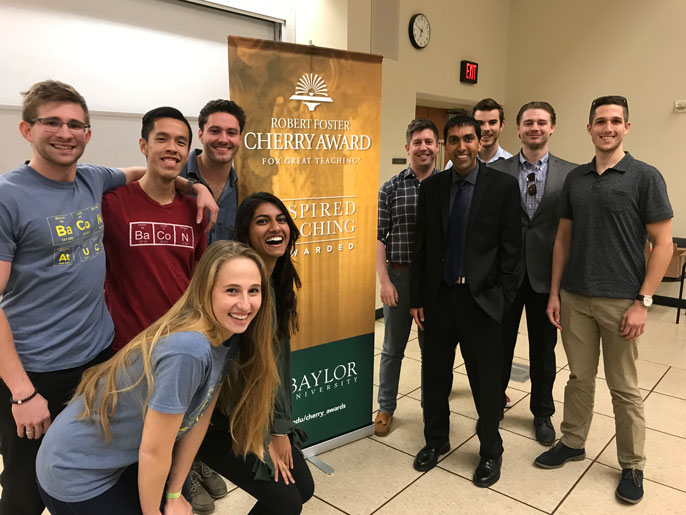 Neil Garg (with jacket and tie) at Baylor University with some of his former UCLA students, who flew to Waco, Texas to support their favorite professor.

California Professor of the Year Neil Garg is the 2018 recipient of the prestigious Robert Foster Cherry Award for Great Teaching. The award, which is given once every two years, was announced by Baylor University. The Cherry Award honors outstanding professors who are extraordinary, inspiring teachers with a positive, long-lasting effect on students and a record of distinguished scholarship.

“Neil Garg emerged from the strong field of nominees because of his record of transformational teaching at UCLA,” said Michael W. Thompson, chair of the award selection committee and associate dean for undergraduate programs in Baylor’s School of Engineering and Computer Science. “The committee was impressed with his ability to combine traditional teaching methods with innovations, such as his widely viewed BACON modules, to inspire students to learn about the difficult subject of organic chemistry while simultaneously developing student’s critical thinking and problem-solving skills.”

Garg, a professor of chemistry who has been on faculty at UCLA since 2007, said that while he was notified of the award weeks ago, it’s just starting to sink in.

“Competing for the Cherry Award at Baylor University was one of the most fun — and, to be honest, stressful — experiences of my career,” Garg said. “I was greatly honored to be named a finalist in the company of two exceptional professors, Clinton Longenecker and Heidi Elmendorf, and am still rather shocked and humbled by the ultimate outcome of the competition. I would like to express my deep gratitude and admiration to Baylor University, whose efforts to strengthen undergraduate education are truly extraordinary. As honored as I am to receive the prestigious Cherry Award, I believe the award is really a tribute to the thousands of brilliant UCLA students I have taught over the years.”

Garg, Longenecker and Elmendorf each spent several days at Baylor, teaching classes and giving a public lecture, interacting with students, and being interviewed by the award selection committee.

“Neil Garg’s students have said for years that he is the best professor they have ever had and ever will have; they won’t be at all surprised to learn he has won our country’s most important award for outstanding university teaching,” said Miguel García-Garibay, dean of the Division of Physical Sciences in the UCLA College and professor of chemistry and biochemistry. “Neil is extremely deserving of this great award for the love of learning he inspires in his students and for his contagious passion for organic chemistry. In addition, he is a world-class researcher, who proves that outstanding teaching and research can, and often do, go hand-in-hand. As Neil himself has said, never underestimate the importance of the way a subject is taught and the importance of an encouraging teacher.”

Garg will be awarded a $250,000 prize and the chemistry and biochemistry department at UCLA will receive $35,000 from Baylor University. The department will put the money toward the creation of an Education Innovation Fund.

Garg has been getting large numbers of UCLA students to love organic chemistry for years, and has won many awards for his teaching and research, including UCLA’s Eby Award for the Art of Teaching and BruinWalk.com’s Professor of the Year.

One of Garg’s teaching initiatives is a set of interactive online tutorials he has developed combining real-life examples of organic chemistry, human health and popular culture — making organic chemistry relevant and important to students. Garg calls it BACON — Biology And Chemistry Online Notes — and he has made it available to professors and educators worldwide.

Garg has developed, with six of his former undergraduate students a free smartphone app called “Backside Attack” that teaches organic chemistry concepts. The app teaches the first reaction many students learn in organic chemistry: the bimolecular substitution reaction known as SN2. In this reaction, a molecule approaches another molecule from its backside to initiate the reaction. Players navigate through several topics and, through interactive game play, learn how changes in chemical structure affect reaction rates. The fundamental concepts taught through Backside Attack are applicable to many other organic chemistry reactions.

Garg and his two daughters, Elaina, 10, and Kaylie, 6, published the Organic Coloring Book in 2017 to help children learn the wonders of organic chemistry.

As a result of Garg’s innovative teaching techniques, he is able to present students with extraordinarily difficult concepts and problems — including ones he did not learn until graduate school — which his undergraduates can master and solve.

One of his students, Aaron Lalehzarian, said his friends told him how difficult organic chemistry is, but Garg taught him, “It’s not impossible. It’s not even that hard. It’s logical.”

Another, Kian Samadian, said, “Neil is the most passionate person about what he does I’ve ever met. He’s easily the best professor I’ve ever had, and the best I probably ever will have.”

Garg and his family live in a campus residence hall as part of UCLA’s faculty-in-residence program, which allows him to eat meals with students, advise them, go on trips with them and inspire them daily with his passion for chemistry.

Garg shared his teaching secrets in this 20-minute TEDxUCLA talk. You can watch and read about Garg discussing organic chemistry, too.