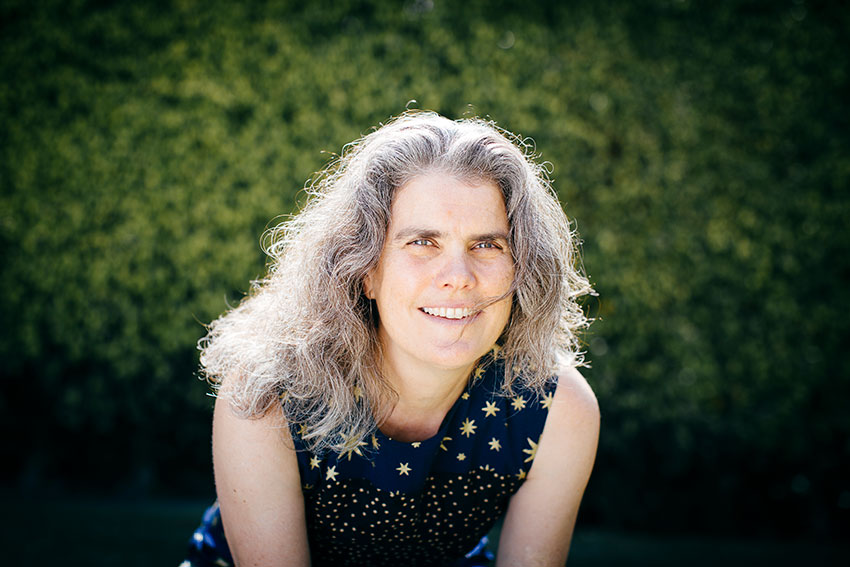 For her pioneering work in astrophysics, Andrea Ghez has been awarded the 2020 Nobel Prize in Physics.

Ghez and Genzel are the 66th and 67th faculty winners.

UCLA professor Andrea Ghez and Reinhard Genzel, a professor emeritus of physics at the University of California, Berkeley, and director of the Max Planck Institute for Extraterrestrial Physics in Garching, Germany, will share half the 2020 Nobel Prize in physics “for the discovery of a supermassive compact object at the center of our galaxy,” the Royal Swedish Academy of Sciences announced today (Oct. 6).

The other half of the prize goes to United Kingdom theoretical physicist Roger Penrose “for the discovery that black hole formation is a robust prediction of the general theory of relativity.”

Ghez, UCLA’s Lauren B. Leichtman and Arthur E. Levine Professor of Astrophysics, is only the fourth woman to win a Nobel physics prize.

“With pride and gratitude, the UC community congratulates professors Andrea Ghez and Reinhard Genzel,” said UC President Michael V. Drake, M.D. “This Nobel Prize is a testament to their incredible work and research, which underscores the power of academic collaboration and scientific inquiry, propelled by continued wonder and discovery.”

The announcement today in Stockholm, Sweden, is for work concerning one of the most bizarre predictions of the general theory of relativity espoused by Albert Einstein more than 100 years ago — that if an object were massive enough, its gravity would be so strong that nothing, not even light, could escape. In 1965, Penrose proved that black holes really can form and described them in detail, showing that, at their heart, they hide a singularity in which all the known laws of nature cease.

In 1969, Donald Lynden-Bell and Martin Rees suggested that the Milky Way galaxy might contain a supermassive black hole at its center, but evidence was lacking because the galactic core is obscured by interstellar dust and could only be detected as a relatively faint radio source, called Sagittarius A*.

At the time, Genzel was a postdoctoral fellow at UC Berkeley working with the late Nobel laureate Charles Townes. The two presented the first observations hinting that the center of our galaxy harbored a massive black hole, though the evidence was weak. Genzel worked steadfastly over the ensuing decades to prove his case.

He developed a “remarkable technique in which he can measure very accurately and determine quite precisely the mass and behavior of stars circulating around the galactic center,” Townes said in 2008. Genzel and his collaborators developed this technique to use with telescopes of the European Southern Observatory, and for many years, Genzel’s team carried out a program of observing the galactic center and its surrounding stars.

He and his colleagues cemented their assertions in 2002, when they reported the orbit of a star around the galactic center and concluded that it circled an object with the mass of several million stars like our sun, all tightly packed into a region less than the size of our solar system.

Ghez led a competing team at UCLA that confirmed this finding. As both groups mapped the galactic center with increasing precision using the world’s largest telescopes, they provided the most convincing evidence yet of a supermassive black hole at the center of the Milky Way, an extremely heavy, invisible object about 4 million times the mass of our sun.

“The discoveries of this year’s laureates have broken new ground in the study of compact and supermassive objects. But these exotic objects still pose many questions that beg for answers and motivate future research — not only questions about their inner structure, but also questions about how to test our theory of gravity under the extreme conditions in the immediate vicinity of a black hole,” said David Haviland, chair of the Nobel Committee for Physics, in a news conference in Sweden to announce the prize.

Andrea Ghez and her research group, published a study in Science in July that is the most comprehensive test of Albert Einstein’s iconic general theory of relativity near the monstrous black hole at the center of our galaxy. Although she concluded that “Einstein’s right, at least for now,” the research group is continuing to test Einstein’s theory, which she says cannot fully explain gravity inside a black hole.

“I’m thrilled and incredibly honored to receive a Nobel Prize in physics,” said Ghez, who is director of the UCLA Galactic Center Group. “The research the Nobel committee is honoring today is the product of a wonderful collaboration among the scientists in the UCLA Galactic Center Orbits Initiative and the University of California’s wise investment in the W.M. Keck Observatory.

“We have cutting-edge tools and a world-class research team, and that combination makes discovery tremendous fun. Our understanding of how the universe works is still so incomplete. The Nobel Prize is fabulous, but we still have a lot to learn.”

Ghez and her team have made direct measurements of how gravity works near a supermassive black hole — research she describes as “extreme astrophysics.”

Einstein’s general theory of relativity is the best description of how gravity works. “However, his theory is definitely showing vulnerability,” Ghez said in July. “[A]t some point we will need to move beyond Einstein’s theory to a more comprehensive theory of gravity that explains what a black hole is.”

Less than two months after her publication in Science, she and her research group reported in Astrophysical Journal Letters the surprising finding that the supermassive black hole is having an unusually large meal of interstellar gas and dust — and they do not yet understand why.

“We have never seen anything like this in the 24 years we have studied the supermassive black hole,” she said at the time. “It’s usually a pretty quiet, wimpy black hole on a diet. We don’t know what is driving this big feast.”

In January 2020, her team reported the discovery of a new class of bizarre objects — objects that look like gas and behave like stars — at the center of our galaxy, not far from the supermassive black hole.

Ghez and her team conducted its research at the W.M. Keck Observatory in Hawaii. They are able to see the impact of how space and time get comingled near the supermassive black hole, which is some 26,000 light-years away.

“Making a measurement of such fundamental importance has required years of patient observing, enabled by state-of-the-art technology,” Richard Green, director of the National Science Foundation’s division of astronomical sciences, said in July.

“Andrea is one of our most passionate and tenacious Keck users,” Keck Observatory Director Hilton Lewis said in July. “Her latest groundbreaking research is the culmination of unwavering commitment over the past two decades to unlock the mysteries of the supermassive black hole at the center of our Milky Way Galaxy.”

The National Science Foundation funded Ghez’s research for the past 25 years. More recently, her research has also been funded by the W.M. Keck Foundation, the Gordon and Betty Moore Foundation and the Heising-Simons Foundation, Lauren Leichtman and Arthur Levine, and Howard and Astrid Preston.

In 1998, Ghez answered one of astronomy’s most important questions, helping to show that a supermassive black hole resides at the center of the Milky Way galaxy. The question had been a subject of much debate among astronomers for more than a quarter of a century.

Ghez helped pioneer a powerful technology called adaptive optics, which corrects the distorting effects of the Earth’s atmosphere in real time and opened the center of our galaxy as a laboratory for exploring black holes and their fundamental role in the evolution of the universe. With adaptive optics at the Keck Observatory, she and her colleagues have revealed many surprises about the environments surrounding supermassive black holes, discovering, for example, young stars where none were expected and a lack of old stars where many were anticipated.

In 2000, Ghez and her research team reported that for the first time, astronomers had seen stars accelerate around the supermassive black hole. In 2003, she and her team reported that the case for the Milky Way’s black hole had been strengthened substantially and that all of the proposed alternatives could be excluded.

In 2005, Ghez and her colleagues took the first clear picture of the center of the Milky Way, including the area surrounding the black hole, at the Keck Observatory.

Ghez has earned numerous honors for her research, including election to the National Academy of Sciences and the American Academy of Arts and Sciences; she was the first woman to receive the Royal Swedish Academy of Sciences’ Crafoord Prize, and she was named a MacArthur Fellow in 2008. In 2019, she was awarded an honorary degree by Oxford University.

She earned a bachelor’s degree in physics from MIT in 1987 and a doctorate from Caltech in 1992, and she has been a member of the UCLA faculty since 1994. When she was young, she wanted to be the first woman to walk on the moon.

Since the Nobel Prizes were created in 1901, 67 faculty from across the UC system have been named Nobel laureates.