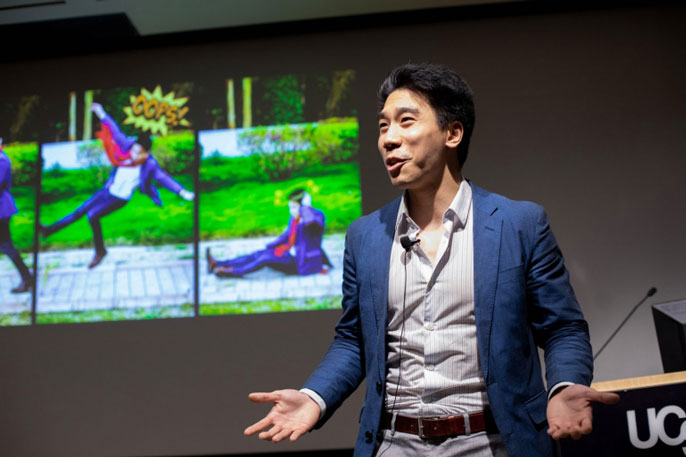 David Wu delivers his talk, "A blood test to uncover concussion," which won the 2019 UCSF Grad Slam and moved him on to the final.

UC Grad Slam is fast approaching — and that means somewhere on a UC campus, a graduate student is pacing in front of a mirror, practicing for friends and roommates and perfecting their pitch as they attempt to condense years of research into a few, fine points.

Over the last few months, hundreds of students — in disciplines ranging from the fine arts to hard science — have competed across the UC system for their campus’s Grad Slam title.

On May 10, the first-place winners from each UC campus will square off in the finals.

Held at LinkedIn’s headquarters in San Francisco, the contest is emceed by UC President Janet Napolitano and judged by a panel of experts in media, industry, arts and education.

Contestants are evaluated on how well they engage the audience, how clearly they communicate their ideas and how effectively they present their research — all in 180 seconds or less.

This year’s contestants will present on such diverse topics as blood tests that uncover concussions; mimicking antimicrobial surfaces for potential use on medical devices; how microbes in the Arctic change our understanding of global warming; the ways a Vietnamese battle of ideas influenced global politics; and more.

At stake is the systemwide trophy, known as the Slammy, and a share of $11,000 in prize money, contributed by Thermo Fisher Scientific, a biotechnology product development company.

But Grad Slam participants say the payoff goes well beyond the potential for cash and glory.

Competitors receive coaching on how to hone their skills in communication and public speaking. Some even participate in theater workshops.

Many come away with the ability to make their research understandable to everyone from fellow academics to relatives at the Thanksgiving table.

The event has also helped students gain wider exposure for their work, some of which has been featured in popular media outlets, such as Grist and The Washington Post.

“Researchers, in all fields, should be able to explain what their research is about not only with their academic colleagues but with the public,” said Pamela D. Jennings, UC executive director of Graduate Studies. “Grad Slam gives our graduate students a great chance to build their public speaking skills while also giving the public a window into the amazing brain trust California has in UC’s 26,000 master’s and doctoral students.”

Among those getting a look at what graduate research is all about are approximately 20 Black Girls Code students, who have been invited to attend the event. The nonprofit hosts workshops and after-school programs for young girls from underrepresented communities to provide computer coding lessons in programming languages such as Scratch and Ruby on Rails.

One of them — Serenity Bassett, a senior at Sacramento’s Inderkum High School, who has been a member of Black Girls Code since she was 11 — will be on the judges’ panel. Bassett is headed to UC Merced in the fall, where she plans to major in computer science.

Anyone can tune in to watch the contest and cast a vote for their favorite immediately after the talks conclude.

The audience favorite will win $1,000 and be announced together with first-, second- and third-place winners selected by the judges.

Go to the Grad Slam homepage to watch the livestream and learn more about the contest and competitors.