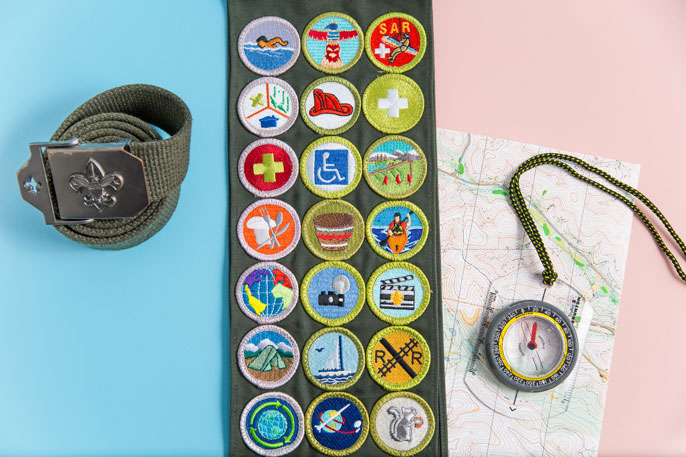 At 18, UC Santa Cruz freshman Gina Schneider became a part of history as one of the first women in the U.S. to achieve the rank of Eagle Scout.

It was an accomplishment she called “exciting,” not only because she couldn’t have imagined it as a little girl tagging along with her brother’s Cub Scout pack but also because it meant girls can now look forward to achieving a goal that had been out of reach for young women for much of the Boy Scouts of America’s 110-year history.

“It feels good to say I was one of the first,” said Schneider (Stevenson ’24, literature) from her home in Fairfax, Calif. “I’m also excited for the generations to come.”

Schneider’s path to the Eagle Scout rank was full of highs (camping, camaraderie, and learning outdoor skills) and lows (being told that, because she was a girl and her brother had graduated to the Boy Scouts, she could no longer hang out with his troop). She felt what she described as “a deep-rooted anger” that a door had been slammed in her face and she could do nothing about it. At 14, she was able to join a Venturing Crew, which is a co-ed scouting program that included backpacking, canoeing, and sailing trips along with other Boy Scouts skills. Still, it wasn’t the same, said Schneider. For one thing, while plenty of people have heard of Eagle Scouts — presidents, sports figures, and business leaders have claimed the rank — few knew of the Venturing program’s top award, called Summiting, despite the fact it had some of the same requirements.

In 2019, the Boy Scouts of America decided to admit girls and changed its name to Scout BSA. The problem was that Schneider would age out of the program before she could complete the requirements for the top rank, which usually takes four or five years to accomplish.

A fellow member of Troop 1015 in San Anselmo, however — Jordan Locke of San Rafael — petitioned the Marin Council, which then took two resolutions to the National meeting later that year and was instrumental in getting extensions for all young women who had been members of scouting as of October 2017 and would age out before February 8, 2021. Schneider and three young women from her troop shifted into high gear.

“I was really impressed how they wrapped their arms around it [the goal] and went for it,” said Lisa Linnenkohl, Schneider’s scoutmaster and an executive board member on the Marin Council of Scouts BSA.

According to the Scouts BSA website, only about 6 percent of scouts achieve the group’s highest rank. The award requires a candidate, among other things, to be a leader for six months and earn at least 21 merit badges in subjects like communication, first aid, business and the environment, and civics.

The four young women studied and practiced the skills needed to earn their merit badges. They camped together every weekend and spent two weeks at Scout camp. The COVID-19 lockdown of 2020 didn’t make things any easier.

“It was exciting and pretty fast-paced,” Schneider said of those busy two years.

As part of her requirements, Schneider also planned, organized, and completed a community service project to decommission an illegal trail in a 62-acre community park in San Anselmo. The illicit path was causing erosion and washing silt into a nearby creek.

Finally, in February, Schneider joined nearly 1,000 other young women across the U.S. who were awarded the rank of Eagle Scout, according to the Scouts BSA website.

The moment was bittersweet for Schneider. While she had reached her goal, she said, she felt the loss of not having something to reach for with her friends.

Schneider is now focused on her studies at UC Santa Cruz, where her mother, Karen White Schneider (Cowell '86, art history), was a talented player on the rugby team. Schneider said she hopes to teach either high school literature or science someday.

“Being an Eagle Scout means a lot,” said Schneider. “It means having leadership opportunities and being dedicated and having experiences, and just forging a path for women and girls.”