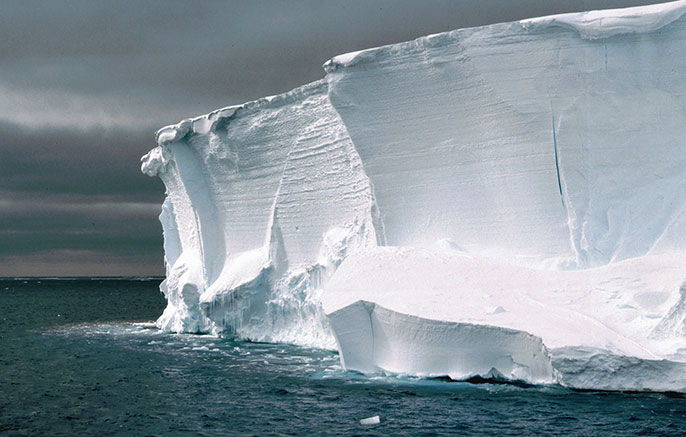 Antarctica’s glaciers are the size of the United States and Mexico combined, and they contain enough water to raise the world’s sea level by 180 feet.

In the early Miocene Epoch, temperatures were 10 degrees warmer and ocean levels were 50 feet higher — well above the ground level of modern-day New York, Tokyo and Berlin.

It was more than 16 million years ago, so times were different. But there was one important similarity with the world we live in today: The air contained about the same amount of carbon dioxide. That parallel raises serious concerns about the stability of ice sheets in Antarctica, according to a study published today in the Proceedings of the National Academy of Sciences.

All told, Antarctica’s glaciers are the size of the United States and Mexico combined, and they contain enough water to raise the world’s sea level by 180 feet. And although no humans live permanently in Antarctica, what happens there impacts everyone, said Aradhna Tripati, a geochemist at UCLA’s Institute of the Environment and Sustainability who collaborated on the research.

“The ice sheets serve as huge stores of water,” Tripati said. “As the ice melts, it gets dumped in the ocean and the sea level rises.”

The study is the latest revelation of ANDRILL, a $20 million research project focused on the South Pole. The effort, now 12 years old, has involved 100 researchers from seven countries. ANDRILL researchers were the first to bore holes through Antarctic ice shelves and sea ice to sample the ocean floor below.

Previous research showed that ice shelves — the parts of the ice sheets that extend over water — are vulnerable to even small increases in greenhouse gases. But the new study, which was written by Richard Levy of GNS Science, a New Zealand research organization, was the first to demonstrate that the huge, land-based glaciers are also vulnerable.

David Harwood, a University of Nebraska paleontologist who led the study, said the project’s goal was to see what prehistoric environments could tell us about the modern era of climate change.

“We’re drilling back into the past to understand the future and how dynamic our planet can be,” he said.

To do that, researchers set 90 tons worth of drilling equipment on a floating sea ice in McMurdo Sound, where conditions can be particularly harsh: The average August temperature is minus 23 degrees Fahrenheit, and savage windstorms can occur at a moment’s notice. Using a diamond-tipped tubular drill, researchers bored through 24 feet of ice, 1,200 feet of water and 3,300 feet of ocean floor. The rock samples they collected preserve a chronological record of environmental conditions dating back 20 million years.

The samples were sent to Tripati for analysis. As she looked at the sedimentary layers, a story began to emerge. Samples that were formed during warmer times, when the ice shelf was gone or unstable, were tan-colored and rich with fossils. But samples drawn from years when the sea was covered with ice, were mostly rock with fossils from only a few deep sea organisms.

"We run the risk of Antarctic ice shelf disappearance"

Looking even closer, Tripati examined individual molecules from the samples to determine air and water temperatures at different times in history. Warmer times correlated with higher levels of carbon dioxide in the atmosphere, melting ice shelves and the loss of parts of the East Antarctic ice sheet.

According to Tripati, scientists are seeing early signs of the same conditions today.

“If carbon dioxide is sustained at current levels, we run the risk of Antarctic ice shelf disappearance,” she said.

The ice shelves are critical because they act like a cork in a Champagne bottle, holding back the huge, land-based flows of glacial ice on the Antarctic continent, Tripati said. But they are particularly sensitive to temperature changes. Just a few degrees of increased warmth can make them disappear because they are warmed by both the air and the sea.

And disappearing ice shelves lead to even more warming because of something called the albedo effect: Light-colored ice reflects the sun’s radiation away from Earth. After it melts, the darker-colored seas absorb more radiation and more heat.

A glimmer of hope, but urgent action required

That process could take hundreds of years, but signs of rapid change are already here. In 2002, the Larsen B ice shelf — which was made up of more than 1,250 square miles of 720-foot-thick ice — disintegrated into the ocean over the course of a month, shocking scientists and observers. Over the past several decades, seven out of 12 ice shelves on the Antarctic Peninsula have collapsed.

Still, researchers say the PNAS findings offer a glimmer of hope. Policymakers rely on computer models to predict future climate change, and the models now can be refined based on the new information about changes that occurred millions of years ago, Tripati said.

The big question that remains is how fast melting will occur. Harwood said the ANDRILL findings emphasize the fragility of ice shelves and the urgency of taking action on a global scale.

“The models simulate thresholds, points of no return,” he said. “It’s good for policymakers to know how fast we have to get off this train or turn it in a new direction.”