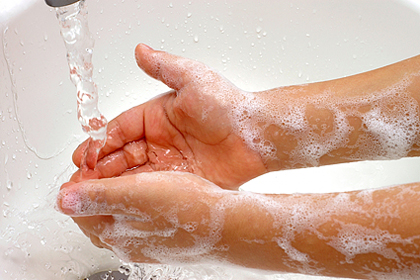 Handwashing with antibacterial soap exposes hospital workers to significant and potentially unsafe levels of triclosan, a widely-used chemical currently under review by the U.S. Food and Drug Administration, according to a study led by researchers from UC San Francisco.

Triclosan, a synthetic antibacterial agent, is found in thousands of consumer products, including soaps, cosmetics, acne creams and some brands of toothpaste. The FDA is reviewing its safety based on a growing body of research indicating that it can interfere with the action of hormones, potentially causing developmental problems in fetuses and newborns, among other health concerns.

In the current study, published in the August issue of the Journal of Occupational and Environmental Medicine, researchers analyzed urine samples from two groups of 38 doctors and nurses — three fourths of them women — at two hospitals, identified as Hospital 1 and Hospital 2. Hospital 1 used an antibacterial soap containing 0.3 percent triclosan, while Hospital 2 used plain soap and water.

“Antimicrobial soaps can carry unknown risks, and triclosan is of particular concern,” said co-investigator Paul Blanc, M.D., a professor of medicine at UCSF who holds the Endowed Chair in Occupational and Environmental Medicine. “Our study shows that people absorb this chemical at work and at home, depending on the products that they use.”

Blanc recommended that “if non-triclosan-containing soaps are available, use the alternative. This is based on the precautionary principle — that is, if you don’t know for certain that something is unsafe, it’s better to err on the side of caution.”

The same principle “could be applied more generally in this case,” said Blanc. “It should not be up to the individual to inspect every product for triclosan. Instead, it’s the duty of the FDA to carry out a review of this chemical and, if indicated, get it off the market.”

For people who want to replace antibacterial products in their home with something safer, said Blanc, “just plain soap and water is a pretty good alternative.”