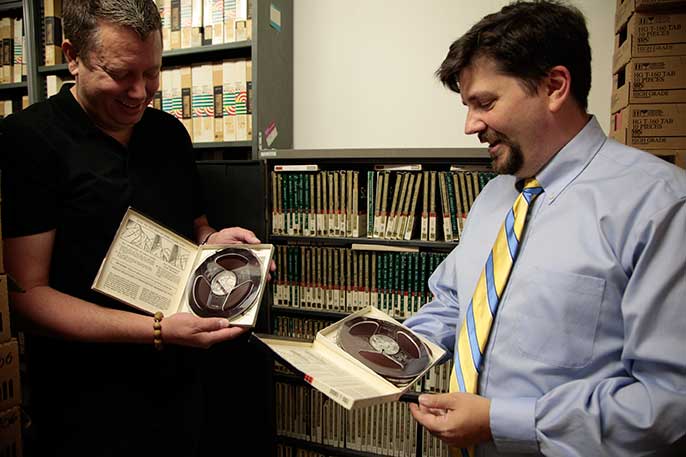 10 most-clicked speeches in the archive

If you remember the 1960s, according to the old adage, you weren’t there.

Then again, you might be among the thousands of people who have already discovered a treasure trove of classic speeches delivered during the era at UCLA. Among those featured are astronauts, actors, activists, politicians and scientists.

In a way, you experience the turbulence of the ’60s if you listen to all of the speeches,” said Derek Bolin, a 2013 UCLA graduate who spent the past nine months digitizing and uploading them to YouTube. “You can hear the ’60s happening in these recordings.”

Goose bump moments include Twilight Zone creator Rod Serling raving in 1971 about a recently released sci-fi flick called “THX1138,” which was George Lucas’s directorial debut; Carol Burnett in 1973 expressing optimism about the prospects for a recent guest on her variety show — his name was Tim Conway; and Vietnam War opponent David Dellinger discussing the Paris peace talks a month before his disruption of the 1968 Democratic Convention made him one of the Chicago Seven.

“I don’t know how organizers did it, but they managed to attract a veritable who’s who of the era,” said Tim Groeling, chair of the UCLA College’s communication studies department, which is responsible for the effort. A mix of scholarly lectures, prepared speeches and free-form question-and-answer sessions, the presentations were mostly organized by the Associated Students Speakers Program, which no longer exists.

Pearls of wisdom from such towering figures as pediatrician Benjamin Spock, Buddhism mainstreamer Alan Watts, polio vaccine inventor Jonas Salk and atom bomb father Robert Oppenheimer were recorded onto reel-to-reel tapes when they were delivered. The tapes languished until last fall in a storage room on the first floor of Rolfe Hall, where communication studies is housed.

The recordings even reveal the evolution of social mores during the era. On the earliest tapes, student moderators and audience members are polite, even obsequious. But by 1971, when Walter Matthau and Jack Lemmon visit, students clearly had learned to, well, question authority.

In a lighter moment during the presentation’s introduction, Matthau dresses down student moderator Gabe Elias for mumbling while giving his own name: “One of the first things in theater is to be understood.”

The exchange isn’t the collection’s only hoot. This is a place to savor George Carlin, Lenny Bruce, Jack Benny and a flash-in-the pan named Swami X whose shtick melded the era’s free love ethos with whimsical misunderstandings of eastern mysticism.

“Sex isn’t the answer!” he admonishes the students with mock severity. “It’s the question. The answer is, ‘Yes!’”

And if you’ve ever wondered how Charlie Brown, Dennis the Menace and Li’l Abner came into being, the speeches include the straight dope from their creators: Charles Schulz, Hank Ketcham and Al Capp.

Of course, the recordings are not all sweetness and light. In an embrace of free speech that is hard to imagine on a mainstream college campus today, speakers include such controversial figures as eugenics proponent William Shockley, American Nazi party founder George Lincoln Rockwell and an unreconstructed Gov. George Wallace, whose defense of segregation prompted the audience to erupt into an impromptu rendition of “We Shall Overcome.”

“I suspect that organizers, in addition to a genuine attachment to free speech in an absolute sense, wanted to avoid appearing to be ideologically narrow in their choices or the appearance of favoring one side in a debate,” Groeling said.

Prominent Bruins in the mix

Not surprisingly, the collection also is rich in Bruin lore. Transformative UCLA chancellors Franklin D. Murphy (the campus’s leader from 1960 to 1968) and Charles Young (1968-1997) are represented, as are Nobel Peace Prize–winning alumnus Ralph Bunche and beloved basketball coach John Wooden.

Bolin’s efforts are being funded by donations from alumni. Having digitized the recordings and uploaded them to the department’s YouTube channel along with vintage photos of the speakers, he now is augmenting the most popular speeches with closed captioning for the hearing impaired.

Bolin offered to take on the task after learning of Groeling’s interest in rescuing the aging tapes. Bolin’s work ethic and willingness to learn new techniques had impressed Groeling in a class the prior spring. But it didn’t hurt that the 44-year-old had more miles on him than the typical communication studies major.