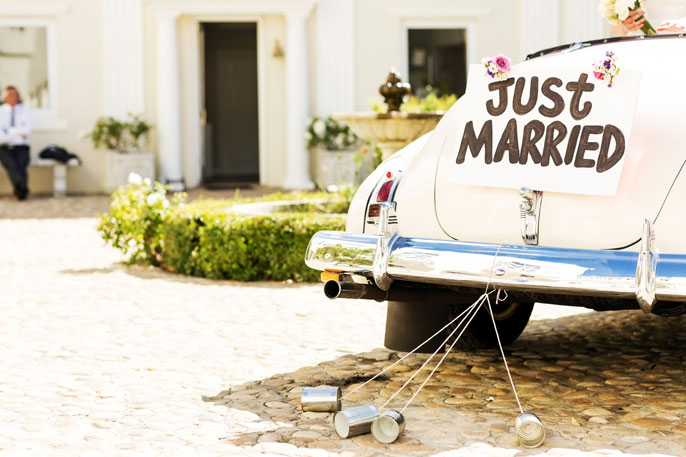 If you’ve ever been a newlywed, you know the tingly euphoria of saying “I do” and starting a life with your spouse. This is romantic love, Western style. We often chalk it up to “chemistry,” an ill-defined connection of hearts and minds. Groundbreaking research at UC Santa Barbara finds we were closer than we knew.

For the first time, researchers have explored the neural and genetic connections to romantic love in newlyweds. By using functional magnetic resonance imaging (fMRI) and genetic analysis of 19 first-time newlyweds, Bianca Acevedo and her collaborators showed that “romantic love maintenance is part of a broad mammalian strategy for reproduction and long-term attachment that is influenced by basic reward circuitry, complex cognitive processes and genetic factors.”

In short, we’re hard-wired to sustain romantic love to maintain a successful marriage and the family unit, thanks to neurotransmitters like dopamine and a suite of genetic mutations.

“The study showed that the maintenance of love is not only associated with activation of subcortical regions but also higher order centers of the brain,” she said. “Also, for the first time we provide evidence that the propensity to sustain romantic love may be affected by genetic variability. Specifically, the genes we examined are associated with pair-bonding behaviors including fidelity and sexual behaviors; and social behaviors such as trust, eye-gazing and attachment.”

To test their hypothesis that romantic love is a developed form of the mammalian drive to find and keep mates, the researchers performed fMRI scans of the brains of the members of the study group — 11 women and eight men. Participants were shown alternating images of their partners and a neutral acquaintance they knew well.

At the start of each session, the subjects were instructed to recall non-sexual events with the person whose face was displayed. While still in the scanner, participants rated their moods to verify that the evoked emotions corresponded to the target image.

The participants were tested around the time of marriage and a year later.

In addition, they provided saliva samples for testing of vasopressin, oxytocin and dopamine genes implicated in pair bonding in non-human mammals, such as voles.

“Our findings showed robust evidence of the dopamine reward system’s involvement in romantic love,” Acevedo said. “This system is interesting because it is implicated in motivation, energy, working for rewards, and is associated with corresponding emotions such as excitement, euphoria and energy, as well as frustration if the drive is thwarted.”

Acevedo’s current research builds on her work on empathy and altruism and its correlates in the brain.

“Empathy has its roots in social bonding,” she explained. “In our previous work we showed that although humans express sentiments such as empathy and altruism towards strangers and non-close others, brain responses to partners are stronger. Thus, there is specificity. Romantic love is somewhat different in that it may or may not include empathy or altruism, but in healthy partnerships it does.”

For some romantics, it might seem a tad clinical to chalk up our feelings of love and commitment to biochemistry. Acevedo, however, said gene mutations and brain activity are only components of romance and belonging.

“Humans are creative and clever,” she said. “Romantic love inspires people to know how to put a smile on their partner’s face. By making our partners happy we not only keep our relationships stable, but we also derive joy from such events.

“In the brain,” Acevedo continued, “this is shown as increased reward activation when people are shown images of a partner smiling and they are told that something wonderful has happened to the partner. People know this intuitively. They know that romance goes a long way in finding and keeping a preferred mate. That’s why there is multibillion-dollar industry built on it — from dating sites, to lingerie to Hallmark cards, chocolate and diamond rings.”

And besides, our chemical impulses don’t buy flowers or cook dinner.

“Love is basic but complex,” Acevedo said. “We are wired to love, but it takes work to find and keep love alive."

Nancy L. Collins, a professor in UC Santa Barbara’s Psychological and Brain Sciences, was a co-author of “After the Honeymoon.” She is also director of the UC Santa Barbara Close Relationship Lab. Other authors are Michael J. Poulin of the University of Buffalo and Lucy L. Brown of the Albert Einstein College of Medicine in New York.