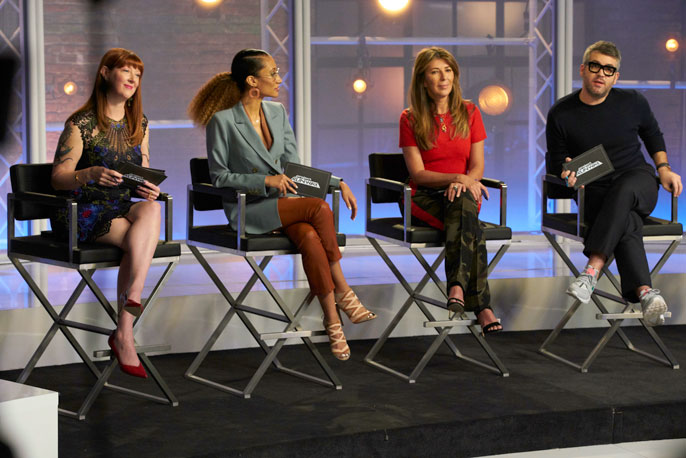 She served as a guest judge on the popular reality television show for an episode where the participants were tasked with designing their own powerful female video game characters.

Hunicke is director of art and design for the Games and Playable Media B.A. program at UC Santa Cruz, as well as the acting director of the campus’s Digital Arts and New Media M.F.A. program.

She is also co-founder and CEO of the independent game design company, Funomena, which in late 2017 released her acclaimed PC and VR game, Luna.

Hunicke explained how she ended up on the show.

"Last fall, a Project Runway producer reached out to ask if I would be interested in helping out with a show that focused on games, and in particular, the need for strong female role models in games, tech and creative industries,” said Hunicke. “I have been a fan of this show for many years, and so I had to pinch myself. And then I said yes!"

"I care very much about these topics,” added Hunicke. “In fact, I developed the Art, Games & Playable Media B.A. at UC Santa Cruz in order to promote the participation of a more diverse population in games and tech. So it was an honor to be recognized for this and the trip out to New York was even better than I had imagined. I got to share my game Luna with the designers, I got to talk with everyone about my work at Funomena and UC Santa Cruz, and then ... they asked me to stay for the weekend and be a guest judge."

Supporting diversity in tech and fashion

Kloss is also the founder of Kode With Klossy, a free coding camp she started in 2015 to empower teenage girls to learn to code and become leaders in tech.

Hunicke said she was very impressed with everyone she met on the set of Project Runway, from the crew and staff to the judges, designers, and producers.

“It was clear that everyone is bought in to supporting diversity in tech, creative industries and fashion — especially Karlie,” said Hunicke. “We had many great conversations about the importance of showcasing women in tech and fashion, as well as the ways these things begin to blend as more and more people play games where dressing up is half the fun."

Hunicke noted that being on television was a bit surreal, but not quite as different from public speaking or giving a lecture as she thought it would be.

“It certainly was a bit intimidating to be on screen, without a script, riffing with the other judges,” said Hunicke. “They are hilarious and also very sharp, and do a masterful job of balancing critique with humor and kindness — something I am lecturing on this quarter. I did my best, which as my students will tell you, is all we can ever do.”

Learn more about Hunicke's work on Luna, a video game that heals, in the video below: