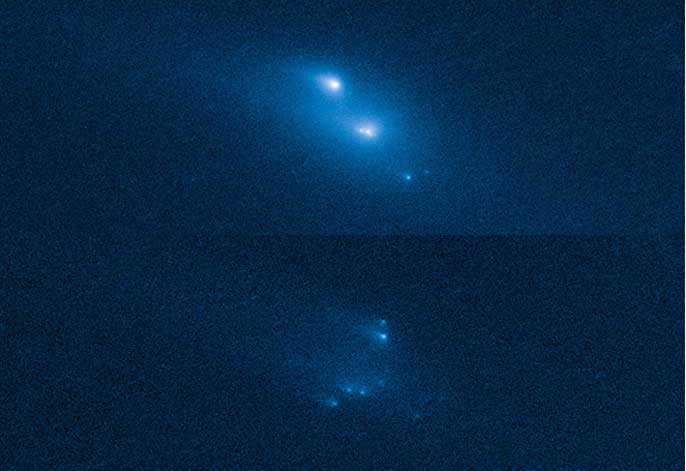 Astronomers have witnessed for the first time the breakup of an asteroid into as many as 10 smaller pieces. The discovery is published online March 6 in Astrophysical Journal Letters.

Though fragile comet nuclei have been seen falling apart as they near the sun, nothing resembling this type of breakup has been observed before in the asteroid belt. NASA's Hubble Space Telescope photographed the demolition.

The crumbling asteroid, designated P/2013 R3, was first noticed as an anomalous, fuzzy-looking object on Sept. 15, 2013, by the Catalina and Pan-STARRS sky-survey telescopes. A follow-up observation on Oct. 1 with the W.M. Keck telescope on Hawaii's Mauna Kea revealed three co-moving bodies embedded in a dusty envelope that is nearly the diameter of Earth.

"The Keck telescope showed us that this asteroid was worth looking at with Hubble," Jewitt said.

With its superior resolution, the Hubble telescope revealed that there were really 10 embedded objects, each with comet-like dust tails. The four largest rocky fragments are up to 200 yards in radius, about twice the length of a football field.

The Hubble data showed that the fragments are drifting away from each other at a leisurely pace of one mile per hour — slower than a strolling human. The asteroid began coming apart early last year, but new pieces continue to emerge in the most recent images.

This makes it unlikely that the asteroid is disintegrating because of a collision with another asteroid, which would be instantaneous and violent. Some of the debris from such a high-velocity smash-up would also be expected to travel much faster than observed.

Nor is the asteroid coming unglued due to the pressure of interior ices warming and vaporizing, Jewitt said. The asteroid is too cold for ices to significantly sublimate, and it has presumably maintained its nearly 300 million–mile distance from the sun for much of the age of the solar system, he said.

This leaves a scenario in which the asteroid is disintegrating due to a subtle effect of sunlight, which causes the rotation rate to slowly increase. Eventually, its component pieces, like grapes on a stem, gently pull apart due to centrifugal force, Jewitt said. The possibility of disruption by this so-called "YORP torque" has been discussed by scientists for several years but, so far, never reliably observed.

For this to happen, P/2013 R3 must have a weak, fractured interior, probably as the result of numerous ancient but non-destructive collisions with other asteroids. Most small asteroids, in fact, are thought to have been severely damaged in this way, giving them a "rubble pile" internal structure. P/2013 R3 itself is probably the product of collisional shattering of a bigger body some time in the last billion years.

With Hubble's recent discovery of an active asteroid spouting six tails (P/2013 P5), astronomers are seeing more circumstantial evidence that the pressure of sunlight may be the primary force that disintegrates small asteroids (less than a mile across) in the solar system.

The asteroid's remnant debris, weighing in at 200,000 tons, in the future will provide a rich source of meteoroids, Jewitt said. Most will eventually plunge into the sun, but a small fraction of the debris may one day enter the Earth's atmosphere to blaze across the sky as meteors, he said.

Jewitt, who is on the faculty of the UCLA College of Letters and Science, is a member of the National Academy of Sciences and a fellow of both the American Association for the Advancement of Science and the American Academy of Arts and Sciences. He co-discovered the Kuiper Belt beyond Neptune in 1993. The discovery of the belt, which contains more than a billion objects and was once believed to be empty space, has fundamentally changed the modern perception of the solar system.

The Hubble Space Telescope is a project of international cooperation between NASA and the European Space Agency. NASA's Goddard Space Flight Center in Greenbelt, Md., manages the telescope. The Space Telescope Science Institute (STScI) in Baltimore conducts Hubble science operations. STScI is operated for NASA by the Association of Universities for Research in Astronomy, Inc., in Washington.