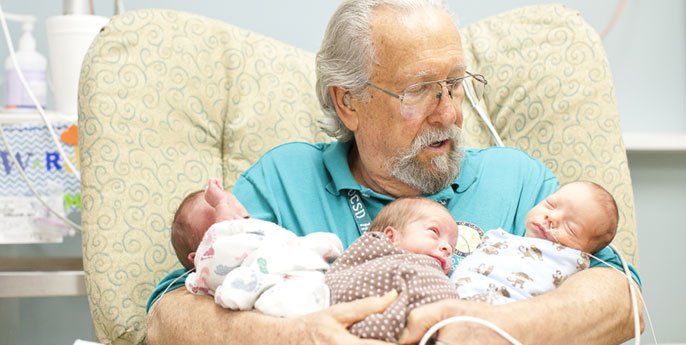 A heated blanket developed by UC Merced-based startup St. Vincent’s Solutions won’t help babies get to sleep – but it could reduce ventilator-associated pneumonia for infants in neonatal intensive care.

Rather than wrapping the infant, the silicon blanket wraps the tubes that bring warm, humidified air to the incubator. By keeping the air within the tubes at a constant temperature, the blanket reduces condensation, which can be a breeding ground for infectious bacteria.

It’s a simple solution, but one that could have a big impact on the hospital’s tiniest patients. Paul Barghouth, a UC Merced graduate student in the quantitative and systems biology program, helped develop the device and has co-founded a startup to bring it to market.

Premature babies need humidified air piped to their developing lungs, but treating the air and transporting it can cause condensation and other problems, which the blanket is intended to help address.

Ventilator-associated pneumonia is widespread in neonatal intensive care units across the country. The illness costs hospitals thousands of dollars to treat, and can lead to dangerous complications for the fragile neonates.

“We’re trying to cut the problem off before it even starts by reducing the possibility the infections will occur,” Barghouth said.

Until now, Barghouth said, efforts to reduce ventilator-associated pneumonia have focused on the humidifier itself – the device that warms and humidifies the air so it will be moist enough for the infants’ lungs.

To address this problem, Barghouth and his colleagues developed a humidifier design that provides a more constant heat and reduces the risk of a baby’s lungs becoming too dry.

But they also came across another problem that posed even more risk to babies – the tubes that bring the humidified air from the reservoir to the patient.

“No one was really looking at the role of the tubes in contributing to infection,” he said. “But the tubing is where a lot of the problems are occurring because that’s the direct link from the humidifier to patient,” he said.

As the air proceeds through the tubes, it drops in temperature, causing condensation or “rain out” within the tubes that is a fertile ground for bacteria to grow. The tubing becomes contaminated with the bacteria and the baby breathes it in.

Researchers designed a silicon blanket that contains heating wires. The blanket wraps around the tubing so the air stays at a constant temperature. In lab tests, the device was able to virtually eliminate condensation within the tubes.

The company is in the process of patenting the technology and acquiring seed funding to create prototypes.

“Yes, our heating blanket is simple, but it’s an elegant fix,” Barghouth said, “one which can save hospitals money and significantly improve outcomes for these vulnerable patients.”