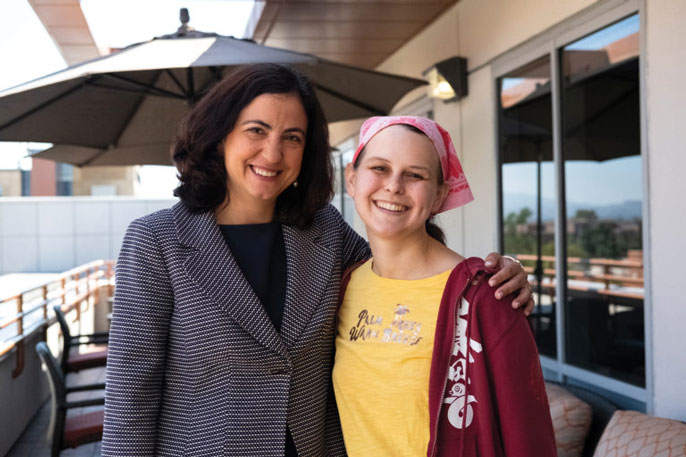 Dr. Daniela Bota shares a joyous moment with 32-year-old Amanda Johnson. After two years in a clinical trial, Johnson’s large glioblastoma shrank so much that it’s no longer measurable.

When you’re facing a cancer diagnosis with an average survival span of 12 to 18 months, every milestone is a victory. That makes each wedding invitation, graduation announcement and birthday photo that UC Irvine neuro-oncologist Dr. Daniela Bota receives from her patients a cherished validation of her 12 years of groundbreaking research on glioblastoma multiforme, the most aggressive form of brain cancer. “Because of our work, these people have been able to move on with their lives,” she says.

Bota has pushed the boundaries of innovation in her quest to increase the survival rates of individuals with brain tumors, especially glioblastomas. The esteemed physician-scientist has taken a truly comprehensive approach to battling this rare disease, which has a five year survival rate of only 10 percent and claimed the lives of U.S. Sens. Ted Kennedy and John McCain. Bota has conducted clinical trials of multiple cutting-edge treatments that are improving the quantity as well as the quality of life for glioblastoma patients at UC Irvine and beyond.

‘So much potential, so much growth’

Bota grew up in Romania, in a family of engineers. It was assumed she’d follow them into the profession — she was a national mathematics champion in her youth — but Bota had another path in mind. “I wanted to make a more significant contribution,” she says. “I wanted to combine my analytical side with a place where I could help others. I ended up becoming an M.D.-Ph.D. to blend both.”

At USC, Bota earned a doctorate in molecular biology, focusing on neural degeneration. She then went to the University of Kansas for medical school and a residency in neurology. During her shifts, Bota found herself caring for people with brain tumors — and discovered a new direction for her medical career.

“The generosity and gratitude of brain tumor patients make it so rewarding to care for them,” she says. “I see it again and again at UC Irvine. Many of these patients have a terminal diagnosis, but they’re volunteering their time and energy to participate in our clinical trials to help us build a better treatment and, hopefully, in the future, a cure.”

After a neuro-oncology fellowship at Duke University, Bota joined the faculty of UC Irvine’s School of Medicine and the Chao Family Comprehensive Cancer Center in November 2007. “Both my career and UC Irvine in general have grown so tremendously over the dozen years since,” says Bota, who’s now co-director of the UC Irvine Health Comprehensive Brain Tumor Program. “There has been so much potential, so much growth, so many changes and so much scientific revolution helping us move forward in so many different directions. It’s a very exciting time.”

The word “comprehensive” carries significant weight in the realm of cancer care centers. The “comprehensive” designation from the National Cancer Institute recognizes an added depth and breadth of research that bridges multiple scientific areas. Just 51 cancer centers in the U.S. carry the designation; the Chao Family Comprehensive Cancer Center is the only one in Orange County. “We offer one of the most innovative and complex portfolios of clinical trials anywhere in the world,” Bota says.

Her own multipronged attack against glioblastoma multiforme reflects the center’s comprehensive approach. Bota’s work on the experimental drug marizomib has generated significant attention and hope. Unlike traditional chemotherapy drugs, marizomib can penetrate the blood-brain barrier — the filtering mechanism that prevents many blood-borne substances from passing into brain tissues — and inhibit cancer growth without causing damage to other parts of the brain.

Over the past 12 years, Bota has shepherded marizomib from preclinical development all the way through a 700-person international phase III clinical trial now underway. “We have a number of patients from our clinical trials who are surviving this tumor for longer periods of time than usually expected,” she says.

Amanda Johnson, a 32-year-old freelance writer in Mission Viejo, has been receiving marizomib for two years under Bota’s care. Her large glioblastoma tumor — which straddled both sides of her brain — has shrunk so much that it’s no longer measurable. She has returned to work on her novel and even joined a gym. “I feel so happy just to be alive,” Johnson says.

Larry Johnson, her father, told Fox News, “I don’t think [Amanda] has come to realize how important her survival is to other people and families who are going to find themselves in a similar situation.”

Bota strives to reach a point where such cases will be so commonplace that they don’t make the news. “That’s what success looks like — not having a prominent publication or being part of a game-changing discovery,” she says. “It’s having patients like Amanda still be here and doing well.”

Vaccine trials and right to try

To achieve that goal, Bota tenaciously pursues multiple avenues of treatment. She has been a leader in the use of Optune, a device worn on the head that generates an electrical field that disrupts the growth of cancer cells. “We were among the first in the country to explore and use this technology,” Bota says. “Now we’re working with physicians from other countries to help them adopt it in their practices.”

She is also spearheading two clinical trials on cancer vaccines. “Brain tumors hide behind the blood-brain barrier, so the body doesn’t recognize them as not being a normal part of the body,” Bota explains. “With our vaccines, we extract cellular markers from the patient’s tumor and inject them back into the patient to stimulate the immune system to recognize those tumors, attack them and, if possible, eliminate them.”

She adds: “Both studies have been well-received in our neuro-oncological community, which is highly promising. And a significant benefit is that the vaccines function with minimal or no toxicity.”

In January 2019, one of Bota’s patients who was ineligible for both clinical trials was able to access one of the vaccines through the first successful application of the national Right to Try Act. Passed in May 2018, it allows people with terminal illnesses, in consultation with their doctors, to seek treatment with experimental drugs not yet approved by the Food and Drug Administration directly from pharmaceutical companies. “The law puts patients in charge of their care; they initiate contact with the manufacturer and request therapy,” Bota says. “It gives patients who don’t qualify for clinical trials another option.”

“We offer one of the most innovative and complex portfolios of clinical trials anywhere in the world.”

Bota eagerly offers her knowledge beyond the doors of the Chao Family Comprehensive Cancer Center. Whenever she and her husband, Robert, a local psychiatrist, travel back to their home country of Romania, she consults with medical colleagues there, as there are no certified neuro-oncologists in the nation. On days when the couple work on their farm in the Transylvanian Alps, locals come to them — often on foot — for medical advice. The two hope to eventually establish a clinic in the area. “I want to make sure that Romania also benefits from my medical expertise,” Bota says.

Back on campus, in her capacity as senior associate dean for clinical research, she uses her vast clinical trial experience to help colleagues in UC Irvine’s School of Medicine advance their own research projects into the clinical arena.

“I’m excited by the ability to impact the lives of so many people through this role,” Bota says. “Whether it’s for burns or vascular disorders or other conditions, people come to UC Irvine for the same reason: We can offer what community hospitals cannot. Being able to make that happen, to create new options for our patients, is what wakes me up in the morning.”