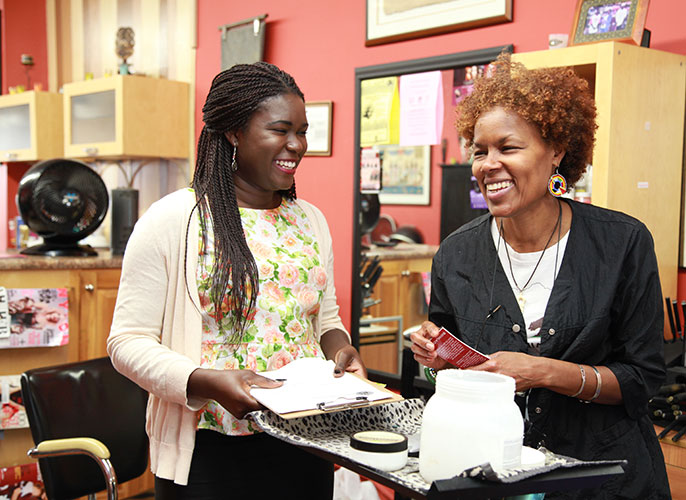 Ph.D. student Teni Adewumi (left) talks to a hair stylist about the potential risk of some hair products. Adewumi is hoping to persuade the city of Inglewood to pilot a program promoting healthy hair salons.

When Teni Adewumi was growing up, she, like many of her family members and friends, spent countless hours in hair salons without ever thinking about the potential side effects of the harsh chemicals being used on their hair.

Now a Ph.D. student in environmental health sciences in the UCLA Fielding School of Public Health, Adewumi has sounded a warning to both patrons and professionals that beauty may come at a hidden cost to their health.

“This is an industry that isn’t regulated, and many of the products include ingredients that are known to be possible carcinogens, endocrine destructors or allergens,” says Adewumi, who began working on this effort as a graduate student in the UCLA Fielding School. “These professionals are exposed both from using the products on themselves and from using them on their clients.”

To document the problem, Adewumi and UCLA-LOSH intern Esmeralda Ponce visited beauty salons in Inglewood and South Los Angeles and surveyed workers to learn more about their occupational exposures and health concerns while also compiling a list of some of the most frequently used products to determine what potentially harmful ingredients are being used.

Talking to focus groups, Adewumi and Ponce also gauged the interest of beauty care workers and consumers in moving toward healthier hair salons with greener products.

The surveys revealed the need for more education about health risks and the use of proper protective equipment. Adewumi found high rates of poor reproductive health outcomes among the workers, including miscarriages and uterine fibroids — outcomes that have been linked in research with the use of hair relaxer products. She also heard horror stories about stylists who no longer had fingerprints after working with certain chemicals and heard about instances of stylists coming down with respiratory disorders from inhaling product fumes.

Adewumi’s interest in making work environments safer began to take shape before she came to UCLA. She was fortunate to land an occupational health and safety internship at the medical manufacturing plant of the Fortune 500 company Medtronic in Santa Ana, Calif., where she thought she would work for only three months.

Instead, Adewumi ended up staying at the company for a year and a half, falling in love with the task of ensuring a safe working environment for employees. Born in Lagos, Nigeria, and heavily influenced by her mother, a registered nurse, Adewumi says that her return visits to her native country only reinforced her interest in the field.

“There is an important intersection between our environment, our work and our health,” she says. “That is what drew me to this field.”

With the encouragement of her mentor at Medtronic, Lisa Hong, an alumna of the UCLA Fielding School of Public Health, Adewumi decided to pursue her master’s degree in industrial hygiene at the Fielding School. After graduating in June, she was accepted into the Ph.D. program in the Fielding School's Department of Environmental Health Sciences.

Adewumi is now participating in an effort to train interested stylists in the use of proper protective equipment, ensure proper ventilation in the workplace and move toward the creation of greener salons.

She is also part of a push to pilot a Healthy Hair Salon program, starting in the city of Inglewood. Working with the California Healthy Nail Salon Collaborative — which is led by three Fielding school alumni who have established a Healthy Nail Salon program — Adewumi and her Black Women for Wellness colleagues are surveying consumers. They hope to build partnerships with members of the Inglewood City Council and plan to approach salon owners about enrolling in the program.

Black Women for Wellness executive director and founder Janette Robinson Flint explains that beauty salon workers are the focus of an educational campaign because they are vulnerable to toxic exposures and because they can be powerful community ambassadors.

“Everyone knows these beauticians and hair stylists inside of African-American communities,” Flint says. “If this group of professionals is empowered to share health knowledge, it has the potential to disseminate widely inside of our community.”

Of Adewumi’s contribution to the project, Robinson Flint says: “Teni is ‘the ground troops.’ She is the one going from salon to salon, asking questions, providing information, analyzing and acting on the data. Without her, this is all just theory.”

Adewumi said she also appreciates the opportunity she’s been given. “It’s been a great experience to be able to work with some incredible women to try to improve their conditions,” she said.

This is an edited version of a story from the UCLA Fielding School of Public Health Magazine.