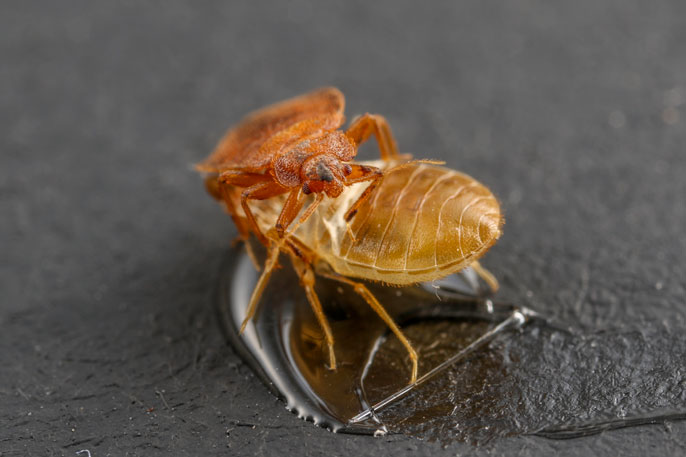 A bedbug climbs on a shed skin of a bedbug.

Researchers at the University of California, Riverside have discovered the shed skins of bedbugs retain the “obnoxious sweetness” smell often associated with the pests, a finding that could potentially be used to combat infestations of the insects.

Bedbugs shed their skins, known as exuviae, as they grow. Four pheromone compounds known as aldehydes are consistently found in the shed skins.

The findings could have significant implications for pest management industries, which can use some of the chemical / mechanical characteristics of the bedbugs’ shed skin to develop small, inexpensive monitor traps to catch living bedbugs at their early stages of infestation.

“This could be a key development in the search to find new methods to detect bedbugs,” said Dong-Hwan Choe, an assistant professor of entomology and an assistant cooperative extension specialist.

Choe is the lead author of a paper, “Chemically Mediated Arrestment of the Bed Bug, Cimex lectularius, by Volatiles Associated with Exuviae of Conspecifics,” published Tuesday (July 19) in the journal PLOS ONE.

The experimental work outlined in the paper had two stages.

First, the researchers placed shed skins obtained from bedbugs at different points of their development in small vials. They then analyzed the airborne compounds in the vials and found that the four aldehydes of interest were consistently detected regardless of the developmental stage.

Second, they collected shed skins from bedbugs kept in the lab, divided them into three groups and “aged” them in the open air for either seven days, 45 days or 99 days.

Then they crushed the shed skins and analyzed them for the presence of the four aldehyde compounds. They found that the amounts of the aldehyde pheromones dropped as the aging period increased, but that even after 99 days the compounds were still present in the shed skins.

Bedbugs difficult to handle, even in the lab

The work had an interesting wrinkle in that researchers could not use carbon dioxide to temporarily knock out the bedbugs when they were handling them. Carbon dioxide gas, which is common in insect research, would have the bedbugs release the large amount of the aldehyde pheromones unnaturally, thus potentially skewing the findings, Choe said.

Instead, they handled active bedbugs.

“That created a level of anxiety,” Choe said. “We didn’t want to accidentally release any bedbugs in the laboratory. But our students handled it well.”