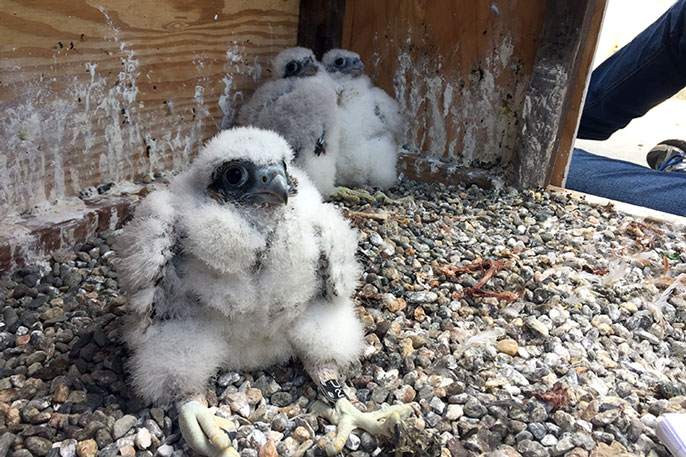 A male peregrine falcon chick (front), and a male (left) and female huddle together in the background.

Hundreds of bird enthusiasts have taken to UC Berkeley’s Facebook and Twitter to suggest names for the three peregrine falcon chicks that hatched on the campus’s Campanile last month.​

Birdy McBirdFace topped the charts — for the second year in a row. Other popular names give a nod to books and movies, from Harry Potter’s Hermione, Harry and Ron to Luke, Leia and Han of Star Wars. And we can’t forget favorites Peter, Paul and Mary after the 1960s American folk group and Huey, Dewey and Louie, after Disney’s duck triplets. Norse god-inspired names like Odin, Thor and Freya were also a hit.

But this year — the 150th anniversary of UC Berkeley — the campus decided it was most fitting to select names tied to the place where it all began. Whether the names were based on exceptional alumni, scientific breakthroughs or notable landmarks, they all had a Berkeley spin. (Last year’s two chicks were named Fiat and Lux, after the campus motto.)

Here are the five name combinations that made it to the final round, with explanations by those who suggested the names. Vote for your top pick at http://bit.ly/2018PeregrineFalconChicks.

The winning names will be announced on Friday, June 1, the first day of “fledgewatch,” a week when volunteers will stand by to make sure the three babies have a successful first flight off the 307-foot tower.

Nestlings fledge about 39 to 42 days after they hatch (males, which are a bit smaller than females, tend to jump a couple days earlier). When baby peregrines take off on their first flight, they fly well, but often land badly, says Mary Malec, a volunteer raptor nest monitor with the East Bay Regional Park District.

“They usually fly out into the wind, then turn around and try to fly back, but it’s hard to gain height,” she said in a Berkeley News Q&A last year. “They may try to land against the side of the Campanile and hang like a moth, then drop off and fly again. By then, however, they will be tired and lose more altitude. That’s when they seem to end up on the ground.”

Last year, peregrine fledglings Fiat (03/AM) and Lux (04/AM) both fledged successfully. After about a week of flying and landing well, however, Lux struck a window on the 10th-floor balcony of Evans Hall and died from the impact. Bird-safe streamers have since been put in place to prevent a similar accident from happening again. Fiat has left the area and no sightings have been reported, which Malec says is usually a good sign because a report often means that a bird is in trouble or dead.

During this year’s fledgewatch, to happen June 1-6 (or until all of the nestlings have fledged and are landing well), volunteers will stand watch near the Campanile from 7:30 a.m. until dark every day.

Flyers will be placed on the lawn around the Campanile that read:

Peregrine falcons have been observed nesting on the campus. Their activity has been monitored by representatives from the wildlife program at the East Bay Regional Park District and the Golden Gate Raptor Observatory. If you see juvenile birds on the ground, they are in danger and need immediate help. PLEASE DO NOT TOUCH OR PICK UP BIRDS. If you find a bird, please call the representatives monitoring the birds:

Malec and volunteers are meeting on campus Wednesday, May 30, at 5:30 p.m., on the raised grassy area on the northeast side of the Bancroft Library to assess the fledglings and go through basic training. Those interested in volunteering can email Anne at abrice@berkeley.edu.