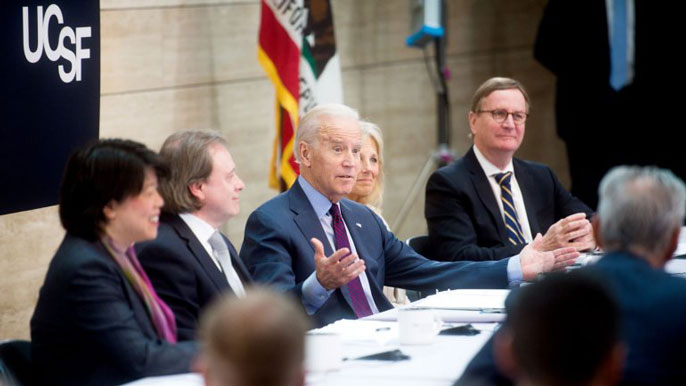 The Bidens’ visit was the latest stop on a national listening tour to meet with scientists to learn how they can help improve the process of cancer research, as well as meet with cancer patients and survivors to help improve care. Since President Barack Obama announced that the vice president would be leading this cancer initiative in January’s State of the Union address, Biden said he’s received overwhelming support for this effort, for which the White House has given $1 billion in initial funding.

“Great goals cannot be reached unless there is a consensus and this is one of those goals where I have overwhelming support from Democrats and Republicans alike – left, right and center,” Biden said. “Everyone, everyone is affected.”

An 'inflection point' in cancer research

All the panelists agreed that we’re currently at an exciting point in cancer research, especially with advances in technology that are allowing scientists to better collect and understand big data.

“We indeed are at an inflection point. Things feel different now,” Ashworth said.

“We’re seeing diseases that were completely intractable, now individuals surviving for a long, long time with new therapies,” he added. “But I think we’ve got to understand the scale of the problem we’ve got here. … We can see perhaps the light at the end of the tunnel, but we don’t quite know at this point how we’re going to get there.”

One way to get there is by supporting high-risk, high-return research that can accelerate new treatments, Ashworth explained. “In the Bay Area, innovation, excellence and risk go hand in hand. You do not get great reward without taking risk. We need to take more risk in the research we do, and embrace that risk.”

That risk paid off for Haddad, a BRCA2 gene mutation carrier who was diagnosed several years ago with stage IV breast cancer. Her doctor, UCSF’s Mark Moasser, M.D., fought hard to get her enrolled in a clinical trial for a drug combination based on an understanding of BRCA2 that has led to her remission.

“I am lucky, but I hope we can take luck out of the equation and give every cancer patient a new chance at a new drug and a life,” Haddad said.

From the audience, cancer surgeon Laura Esserman, M.D., spoke about the need to find way to accelerate clinical trials for cancer treatment. “We only suffer from a lack of imagination.”

Ashworth, who was a key part of the team that discovered the BRCA2 mutation, recently announced the opening of the UCSF Center for BRCA Research, which treats patients with BRCA1 and BRCA2 mutations that are associated with an increased risk of breast and ovarian cancers.

Biden emphasized that his intention for the listening tour was to better understand how the federal government can help in the cancer fight.

Several panelists spoke about the need to better enable collaboration and sharing information.

Berger, who consulted on the brain cancer case of Biden’s eldest son, the late Beau Biden, touted the benefits of doing “team science,” but noted that the current federal grant-funding structure can put researchers at leading universities in competition with one another.

“One of the things we have to figure out how to do better is to work together, and in order to do that, we can’t be [concerned with] competition,” Berger said.

Miaskowski, who’s done pioneering pain research, spoke about the importance of symptom management for cancer patients and advocated for a system of better sharing that type of data among researchers.

Park said data also should be more available to patients, so they can choose to securely donate it to advancing research. “Unless that data truly becomes liquid and goes where patients need it to go, then a lot of progress we need to make won’t happen.”

Earlier in the day, the Bidens toured the UCSF Center for Advanced Technology, where they met with Zev Gartner, Ph.D., an associate professor in the Department of Pharmaceutical Chemistry in the UCSF School of Pharmacy, who showed them a 3-D cell printer that creates tissue from an individual's own cells, to be used for both understanding cancer and for testing personalized therapies. The couple also met with Wendell Lim, Ph.D., a professor of cellular and molecular pharmacology, to discuss immunotherapy by engineering immune cells that distinguish cancer cells from healthy ones.

Listen to audio of the full roundtable discussion, which begins at 1:08:40 on the video below: