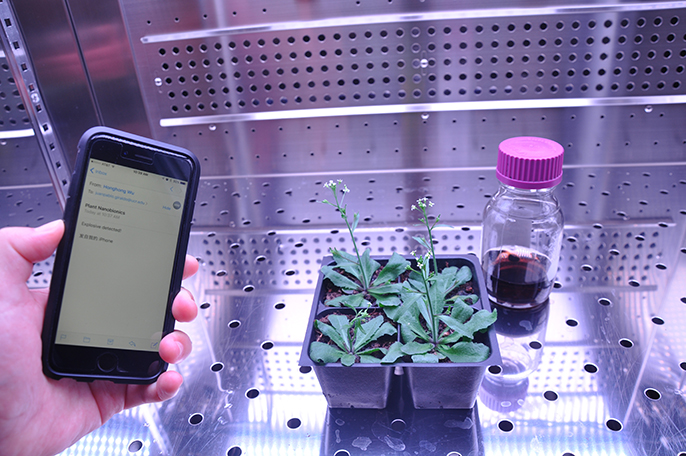 A team of scientists are embedding carbon nanotubes (right) in plants to detect explosives and wirelessly relay the information to an electronic device.

A team of scientists, including a UC Riverside assistant professor, embedded spinach leaves with carbon nanotubes to transform the plants into sensors that can detect explosives and wirelessly relay that information to a handheld device similar to a smartphone.

The work has potential applications in agriculture, where the sensors could be used by farmers to monitor plant health and improve crop yield, and in the defense and law enforcement fields, where plants embedded with the sensors could detect explosives and harmful airborne chemicals and pollutants.

“In a way, we are showing that we can turn plants into solar powered technology that report to humans what they are experiencing in the environment,” said Juan Pablo Giraldo, an assistant professor of plant physiology at UC Riverside and a co-first author of a paper about the research published Oct. 31 in the journal Nature Materials. He conducted much of the work as a post-doctoral researcher at MIT and concluded the study at UC Riverside.

This is one of the first demonstrations of engineering plant function with nanotechnology, an approach that the researchers call “plant nanobionics.” They are introducing nanoparticles – in this case carbon nanotubes, a tube-shaped nanoparticle made of carbon that is 10,000 times thinner than a human hair and has unique electronic, optical and chemical properties – into plants to give them non-native functions.

In the Nature Materials paper, the plants were designed to sense chemical compounds known as nitroaromatics, which are often used in landmines and other explosives. When one of these chemicals is present in the groundwater sampled naturally by the plant, the embedded carbon nanotubes emit a fluorescent signal that can be read with an infrared camera. The camera can be attached to a portable electronic device similar to a smartphone, which then sends an email to the user.

Using a technique called vascular infusion, which involves applying a solution of nanoparticles to the underside of the leaf, the researchers placed the sensors into a leaf layer known as the mesophyll, which is where most photosynthesis takes place.

They also embedded carbon nanotubes that emit a constant fluorescent signal that serves as a reference. This allows the researchers to compare the two fluorescent signals, making it easier to determine if the explosive sensor has detected anything. If there are any explosive molecules in the groundwater, it takes about 10 minutes for the plant to draw them into the leaves, where they encounter the detector.

To read the signal, the researchers shine a laser onto the leaf, prompting the nanotubes in the leaf to emit near-infrared fluorescent light. This can be detected with a small infrared camera connected to a Raspberry Pi, a $35 credit-card-sized computer similar to the computer inside a smartphone. The signal could also be detected with a smartphone by removing the infrared filter that most camera phones have, the researchers say.

Using this setup, the researchers can pick up a signal about 1 meter from the plant. They are working to increase that distance.

In the first demonstration of plant nanobionics in 2014, Giraldo used nanoparticles to enhance plants’ photosynthesis ability and to detect nitric oxide, an air pollutant produced by combustion. Giraldo was then working in the MIT lab of Michael Strano, the Carbon P. Dubbs Professor of Chemical Engineering.

Anne Trafton, of the MIT News Office, contributed to this press release.