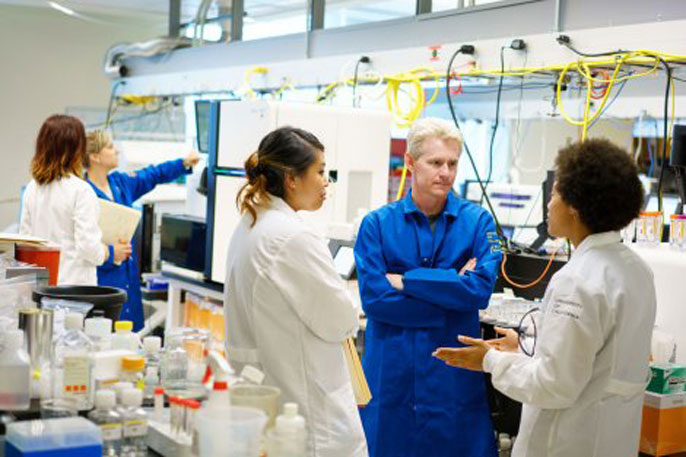 Bill Bowes has a rare ability. As a pioneer of the biotech industry, a venture capitalist for 50 years, and one of the world’s most generous philanthropists, Bowes is known as a divining rod for raw talent. He has an innate sense of the next big idea and who has the best mind to see it through. And when Bowes invests in that talent — whether through a business deal or out of sheer goodness of heart and hope — the world listens.

With a $50 million pledge, Bowes has invested in UCSF’s core strength and innovative engine: young investigators. This pledge, which will fund the Bowes Biomedical Investigator Program, is the most recent and largest of the gifts Bowes has made to UCSF over the years. This brings his total giving to UCSF to nearly $100 million.

The Bowes Biomedical Investigator Program will provide a five-year funding stream of $250,000 per year per investigator to early- and mid-career faculty members. Chancellor Sam Hawgood, MBBS, will lead the process to select the recipients based on the quality of their scientific contributions, the significance of their potential impacts, and the novelty of their approaches to discovery.

“That Bill Bowes, a world-renowned entrepreneur, is investing in UCSF as an institution and in its best and brightest young investigators is indeed an honor,” says Hawgood.

“Bill is a cherished friend, valued member of the UCSF Foundation Board of Directors, and partner. His support for our young faculty is crucial as they establish their own labs and choose their paths, for national funding sources are scarce during their early, vulnerable years.”

The Bowes Biomedical Investigator Program will emphasize transdisciplinary and unconventional approaches to advancing science and nurture the highest-caliber scholars who will be the next-generation leaders in their fields. The program will particularly target junior and mid-career faculty members whose research interests do not fall within classic disciplinary lines. This group is among the most challenged in acquiring funding from traditional sources. The cohort of Bowes Investigators will grow over time, and as past recipients become established in their careers, they will become “alumni” of the program, creating a community that spans generations.

“I first met Bill when I was named dean of the UCSF School of Medicine,” recalls Hawgood. “His warmth and generosity were immediately evident, as was his passion for helping young people launch their careers. He has accomplished that with this gift and so many others through the years. His impact on UCSF has been profound.”

Bowes’ philanthropic interests are primarily in basic science that cuts across multiple disciplines. As chairman of the Mission Bay Capital Campaign, he catalyzed vital momentum and shepherded us through the building of UCSF’s state-of-the-science campus. He also serves on the Industry Advisory Board of QB3, a joint program with UCSF, UC Berkeley and UC Santa Cruz dedicated to incubating innovative, transdisciplinary research and ensuring that discoveries are quickly brought forth to benefit the citizens of California and the world. Bowes has also supported such diverse areas as integrative medicine, neuroscience, stem cell research and our Ph.D. students through the Discovery Fellows Program.

Over the years, it seems that it is the scientists, not the fields, that capture his imagination. “Bill’s support came at a very important time for my lab,” says neurosurgeon Edward Chang, M.D., co-director of the Center for Neural Engineering and Prostheses at UC Berkeley and UCSF. “It allowed us to take risks that enabled us to be the top contenders for President Obama’s BRAIN Initiative. Without Bill’s support, we definitely couldn’t have done it.”

Joseph DeRisi, Ph.D., chair of UCSF’s Department of Biochemistry and Biophysics, has a similar story to tell about support from Bowes that helped launch the UCSF Center for Next-Gen Precision Medicine Diagnostics. It is an initiative that develops and deploys next-generation diagnostics for brain infections. “Philanthropy was absolutely essential to move this technology from the research bench into the clinical lab,” says DeRisi. “Bill clearly recognized the potential of this technology to both improve health outcomes, literally saving lives in some cases and reduce cost overall − the magical combination we all strive for.”

UCSF is a pioneer in stem cell science, and Bowes was one of the earliest supporters of the program. Arnold Kriegstein, M.D., Ph.D., director of the Eli and Edythe Broad Center of Regeneration Medicine and Stem Cell Research at UCSF, recalls meeting Bowes in 2004, the year Kriegstein came to the University. “He wanted to help me build a program that would attract the best scientists from all over the country,” says Kriegstein, recipient of the John G. Bowes Distinguished Professorship, which was named in honor of Bowes’ late brother. “His support helped us to create a world-class program. We couldn’t have done it without him.”

“At every point, when needs were urgent and opportunities transformative, it always seemed as if Bill was right there. And here he is once again,” says Stephen Hauser, M.D., director of the UCSF Weill Institute for Neurosciences. “Bill made matching investments in facilities that permit our young investigators to realize their dreams. His new gift extends that amazing legacy.”

Champion of science, art and education

An innovator himself, Bowes founded Amgen, the world’s largest, privately held, multinational biopharmaceutical firm. After leaving Amgen, Bowes founded U.S. Venture Partners in 1981 and has been there ever since.

Bowes and his wife, Ute, have been great champions of science, art and education throughout the Bay Area. Bowes devotes much of his time and talent as an executive committee member of the San Francisco Conservatory of Music and recently retired as board chairman of the Exploratorium, San Francisco’s interactive science museum. He also serves on the boards of the Asian Art Museum, Grace Cathedral and the Hoover Institution at Stanford University and is an adviser to the Institute for Systems Biology in Seattle, Bio-X at Stanford and Harvard Partners Center for Genetics and Genomics to further interdisciplinary medical research.

Known for his quiet strength and humility, Bowes has touched a great many lives, whether through his work, his philanthropy, or by example. “I knew from the very first time I met Bill that he was a special person,” says Nerissa Ko, M.D., a critical-care neurologist who holds the first William K. Bowes Jr. Foundation Endowed Professorship in Neurocritical Care. “He is the most humble and giving person I have ever met. He has given me confidence and has been an inspiration. I owe a lot of my success to him.”

“What struck me about Bill the first time I met him was just how understated he is,” says Chang. “You would never know how much he has accomplished and how much he has given back. He really is a tremendous role model.”