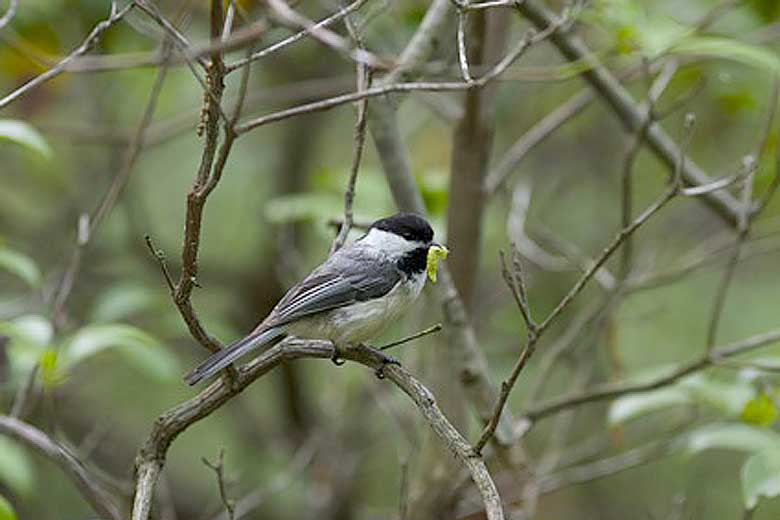 A black-capped chickadee prepares to dine on a caterpillar.

IRVINE — Location matters for birds on the hunt for caterpillars, according to researchers at UC Irvine and Wesleyan University. Findings suggest that chickadees and others zero in on the type of tree as much as the characteristics of their wriggly prey.

Unfortunately for caterpillars, munching on tree leaves that are healthy and tasty can dramatically boost their own risk of becoming food. Study results, published online this week in the American Naturalist, show that dining on the trees that are most nutritious for caterpillars — such as the black cherry — can increase by 90 percent their chances of being devoured by a discerning bird.

"The jump in risk is surprising," said co-author Kailen Mooney, assistant professor of ecology & evolutionary biology at UC Irvine. "It shows that for caterpillars, moving from one tree to the next can mean the difference between getting eaten and surviving."

Mooney, who specializes in the ecology of predatory birds, said tree identification is probably learned by birds, not genetic. He added that Southern California bird species probably do the same with coastal sage scrub, determining which types of bushes afford a better chance of tasty insect treats.

With help from a small army of students, the scientists conducted a two-year experiment in Connecticut forests involving hundreds of tree branches either covered with bird-proof netting or left bare.

Mooney noted that the results illustrate a stark choice between gaining strength through a good diet but being more vulnerable to predators and remaining weaker and hungrier but more safe.

About the University of California, Irvine: Founded in 1965, UC Irvine is a top-ranked university dedicated to research, scholarship and community service. Led by Chancellor Michael Drake since 2005, UC Irvine is among the most dynamic campuses in the University of California system, with nearly 28,000 undergraduate and graduate students, 1,100 faculty and 9,000 staff. Orange County's second-largest employer, UC Irvine contributes an annual economic impact of $4 billion. For more news, visit www.today.uci.edu.