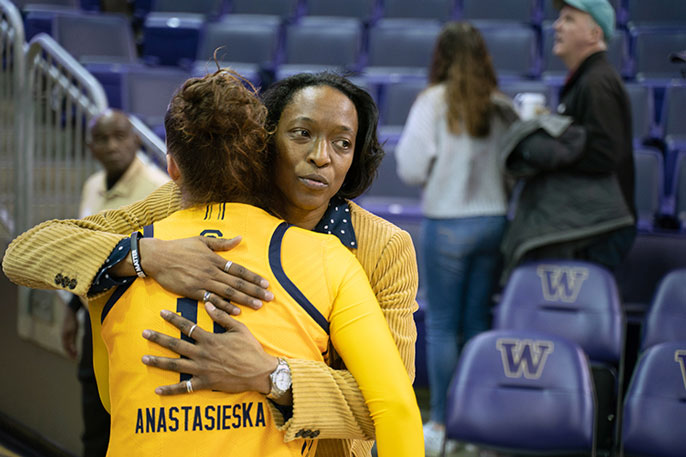 UC Berkeley Women’s Basketball Head Coach Charmin Smith consoles one of her players after a game. Smith played basketball at Stanford University in the mid-1990s and then as a pro in the WNBA. As a longtime Berkeley women’s assistant basketball coach, Smith began her tenure as the team’s first Black head coach last year.

Black athletes throughout American history have been persecuted and silenced for using their public platforms to advocate for social issues that run in contrast to the opinions of dominant white culture. This has often deterred players from coming together in force to protest around common causes.

That all changed last week, when, in a unified response to the shooting of Jacob Blake, a 29-year-old Black man who was shot in the back seven times by a Kenosha, Wisconsin police officer, professional athletes across the country refused to play in scheduled games or matches.

According to a YouGov poll taken last week, 57 percent of Americans supported the basketball players and teams that refused to play because of the Blake shooting.

“People are realizing that there are so many ways in which athletes are exploited,” said Charmin Smith, head coach of the UC Berkeley Women’s Basketball team and former WNBA player. “And that athletes do have a right, just like any other human being, to speak up and to point out things in this country that cause them harm.”

Smith is an active supporter of the Black Lives Matter movement and encourages her players to stand up for social issues that they believe in. Berkeley News spoke with Smith about the players’ strike, and why it’s important for athletes to protest and use public platforms to bring awareness to racial injustice in America.

Berkeley News: What was your first reaction to the players striking in response to the police shooting of Jacob Blake, and what do you think it will accomplish?

Charmin Smith: Prior to the strike, I was already impressed with the WNBA. There are a number of players like Maya Moore and Natasha Cloud who sacrificed their entire seasons, and Maya did this well before George Floyd was murdered. Many players have said there are more important things than basketball right now.

That sacrifice is really huge.

When I got the alert about the Milwaukee Bucks walking out of their playoff game last week, and the other NBA teams that followed, I said “Wow, this is big. Now we’re getting somewhere.”

The WNBA teams followed suit because they’ve been leading in this narrative. I checked in with a couple of my players and they thought it was “legendary,” and just really impressive. I do have to be honest, in seeing that games did end up resuming I was a little bit deflated with that because I think all the leverage was given away.

I wasn’t in the room when the decision was made to resume playing so I can’t claim to know what was discussed and I’m not privy to the plan I just felt like it ended up looking like a personal day to get emotions in check instead of a firm stance.

The players have a lot of power and a lot of influence. There are some things that are getting accomplished because of this, but there’s a lot more that can be done.

Berkeley News: I’ve seen from your Twitter account recently that you yourself have done more by going out on the streets in Oakland and Los Angeles to protest against police brutality and racial injustice. Why is it important for you to do that?

Smith: The protesting is always really fulfilling in that it’s always such a diverse crowd and you just feel supported, you feel like change is possible. It gives me hope.

When I think about this more recent shooting of Jacob Blake, it really takes me back to the same feeling that I had around the time George Floyd, Breonna Taylor and Ahmaud Arbery were murdered.

The whole narrative that Blake had a knife and he didn’t comply, and he had warrants out for his arrest, is really frustrating. I’m sure he is not a perfect man, but I just would like for someone to give me an example in which a white male is shot seven times in the back because of assumptions being made about him.

Maybe I’m missing it, but I just haven’t seen it.

It seems like some of us fail to realize that there is a huge difference in how Black males, in particular, are treated by police officers, compared to any other race. As long as we ignore that, then it’s horrifying. It’s horrifying because you just never know what’s going to happen when you come across a police officer if you are a Black person.

That’s why I protest, and that’s why, this time around, we’re seeing professional athletes unified in refusing to play games and going into their own communities to protest as well.

Berkeley News: The players strike was a form of peaceful protest. But what do you say to people who criticize protesters who are out in the streets, and label them as “rioters”?

Smith: When I have been out there, I haven’t witnessed rioting, and I don’t support rioting or violence.

But I understand it.

When the founding fathers of this country fought for what they thought were the rights that they felt they deserved from the British, they didn’t do it peacefully. They didn’t do it in silence.

So, I’m not advocating for violence. But we have to continue to ask, what is causing this violence? If you’d fix the systemic racism in this country, there would be less violence. Also, if we weren’t an oppressed group of people fighting for scraps in this country, generally speaking, then maybe we wouldn’t have as much crime in our communities.

We may even see more athletes out there continuing to demonstrate and refusing to play.

Berkeley News: How do you feel about politicians, and some media outlets, that have ostracized athletes for speaking out on social and political issues?

Smith: People’s narratives are used to support whatever agenda it is that they want to push. So, Laura Ingram told LeBron James to “shut up and dribble” when he criticized President Trump. But then turned around and said that Drew Brees should be using his platform when he said that it’s disrespectful to kneel during the national anthem.

I believe that hypocrisy shows you her true colors.

With the current support around social justice protests around the country, some people in hindsight are now saying, “Well, maybe we should have listened to Colin Kaepernick.” But, Kaepernick still doesn’t have a job. He was trying to do it peacefully and he was ostracized. They pushed him out.

No matter what athletes have done in the past to fight for justice and equality in this country, it hasn’t been received well. But right now, it does feel a little different. We’re seeing more public support for the players who refused to play because I think there is more awareness around these issues.

I also think people are realizing that there are so many ways in which athletes are exploited, and that we do have a right, just like any other human being, to speak up and to point out things in this country that cause us harm.

So, now we have athletes sacrificing their paychecks by refusing to play. When are the people who are the oppressors going to make sacrifices? I’m not sure that that will happen.

Berkeley News: As a former collegiate athlete, and now as a coach, do you think it gives your players their own agency to make a difference when they see professional athletes taking a stand on these social issues?

Smith: I think the change always comes from the youth, and I’m really excited to see what this younger generation is going to do.

But the first sign of what they’re going to do is how they show up in this upcoming election. I don’t think the representation from younger voters was that great in 2016. So, that’s been a challenge from coaches to student athletes, and from student athletes to their peers to get everyone to understand the importance of voting.

We all need to show up.

Now, we’re not telling you who to vote for, but we’re telling you to get involved and have a voice. I think that will tell us if younger people are really serious about putting their footprint on this nation to start to shape what direction things go.

Berkeley News: Do you think as an institution, UC Berkeley is supportive of student-athletes, and the rest of the campus community, who want to speak up and be active in racial justice efforts?

Smith: At Berkeley, I feel as though we have some work to do in this area, and I’m glad that we’re doing the work.

Historically, it’s the home of the free speech movement and it’s supposed to be this place where you can stand up and fight for whatever you believe in, and I think to some extent that is true.

I think Chancellor Christ is extremely supportive, and our Director of Athletics Jim Knowlton is as well. And honestly, for me, I have no choice but to speak up. My team is predominantly Black, I’m Black, and I won’t be silent during this time.

I will not comply with what’s going on in this nation right now.

I have colleagues who coach at other institutions who have thanked me for speaking up because they can’t do that where they are, and that’s their truth. They just are in a position where they don’t feel supported.

So, I’m grateful to be in the state of California and the University of California, Berkeley, with people who understand that we need to be better.