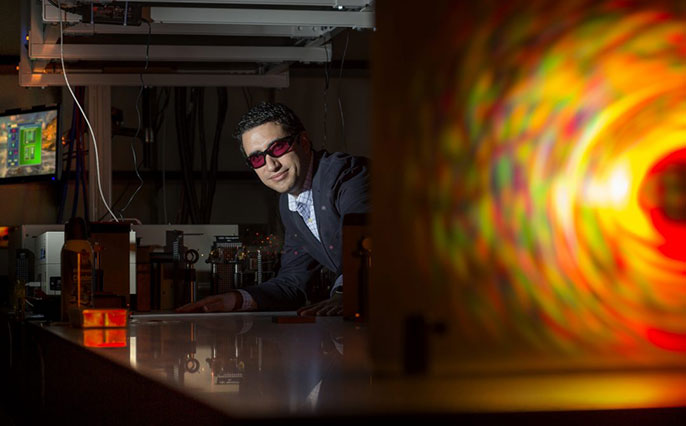 Franklin Dollar, assistant professor of physics and astronomy, grew up on a reservation in a home with no electricity. Now he studies ultra-high-intensity laser-plasma interactions and works to increase diversity in scientific fields.

Franklin Dollar was born on the wrong side of the digital divide.

“I’m a member of the Dry Creek Band of Pomo Indians,” he says. “I grew up on a small reservation near Geyserville, California, with no running water, no electricity and no internet access.”

Such conditions no doubt prevent many Native Americans from achieving their full potential, but Dollar says some crucial factors in his youth enabled him to become what he is today: an assistant professor of physics & astronomy at the University of California, Irvine and head of a lab studying ultra-high-intensity plasma physics.

“I was taught at a small, rural school called the Geyserville Educational Park,” he says. “Along with students like me from the reservation, we had the children of migrant workers and some whose parents were managers at the local wineries, so there was a very wide spectrum of socioeconomic and racial backgrounds. It was a very unique, interesting place to grow up.”

Dollar, great-grandson of Pomo Indian matriarch Elizabeth Cordova Dollar, says his tribe prevailed for more than 5,000 years along the banks of the Russian River in present-day Sonoma County because of its strong familial bonds and sense of community. That connection to others has been vital to him throughout his academic career.

“I had an extremely good science teacher who really pushed me toward going not only to a four-year college but also into physics in particular,” he says. “I had no idea what it meant to pursue higher education or what I would get out of it, but he gave me a lot of guidance and helped me with the application process.”

From UC Berkeley to Berkeley Lab

Dollar was accepted to UC Berkeley and opted to major in engineering physics. “The nice thing about that major is that it was very fluid,” he says. “It was up to you whether you wanted to take more physics courses or more engineering courses, and you could pick and choose from an array of disciplines rather than being limited to just one. That was very good for me.”

During his first couple of years at UC Berkeley, Dollar worked at a chain drugstore. Then he heard about some of the undergraduate research opportunities offered by the university. Via the UC Leadership Excellence Through Advanced Degrees program, he got a job conducting research at the Lawrence Berkeley National Laboratory.

“It was a big change in my life because all of a sudden, I was doing lab science,” Dollar says. “It was very serendipitous to get that position at Berkeley Lab; it really helped me understand what it meant to be an academic involved in research.”

His time at the lab was also his first contact with the world of imaging physics. He was part of a team developing advanced optics for NASA’s Solar Dynamics Observatory. Its focus was creating sensors that could pick up X-ray frequencies from iron at various temperatures in the roiling, hot mass of the sun, giving scientists a tool for mapping the star.

“That was a pretty interesting project to start off with,” he says. “I got to collaborate with some brilliant scientists and researchers, and I worked on the Advanced Light Source, which is a particularly impressive bit of research machinery.”

Dollar remained at the lab throughout his time at UC Berkeley, supported by UC LEADS, the California Alliance for Minority Participation and the National Science Foundation. “I always felt very lucky that I landed in the programs that I did,” he says. “They helped steer me in the right direction.”

After earning a Ph.D. in applied physics at the University of Michigan in 2012, Dollar became a postdoctoral scholar at the University of Colorado Boulder’s JILA institute. He investigated X-ray source production with high-intensity lasers, a pursuit he has continued in his own lab since joining UC Irvine's Department of Physics & Astronomy in the fall of 2015.

He also participated in drafting a proposal to procure National Science Foundation support for a new Science & Technology Center to explore how imaging modalities such as X-ray, optical and electron microscopy can be improved and combined to help answer some of the most complex and challenging questions in medicine, chemistry, physics and other areas of science. The effort paid off; last fall, the NSF announced a five-year grant of $24 million to fund the Science & Technology Center on Real-Time Functional Imaging, with Dollar as head of its work here at UC Irvine.

Boasting research locations at UC Irvine, UC Berkeley, UCLA and the University of Colorado Boulder, as well as education sites at Fort Lewis College and Florida International University, STROBE — as it’s called — will meld cutting-edge imaging research with learning outreach to underrepresented populations, with a focus on Native American and Hispanic students.

The center is designed, in effect, to mint more Franklin Dollars.

“Our mission is student success, and that comes in the form of increasing representation everywhere optical science exists, including policy, law, industry, entrepreneurship and the other nonacademic positions that most of our students will end up in,” he says.

“I benefited tremendously from all the groups and programs that were there for me during my education,” Dollar says. “Now we have an opportunity to put even more pieces of the puzzle together for other underserved students. I’m glad to be a part of that.”