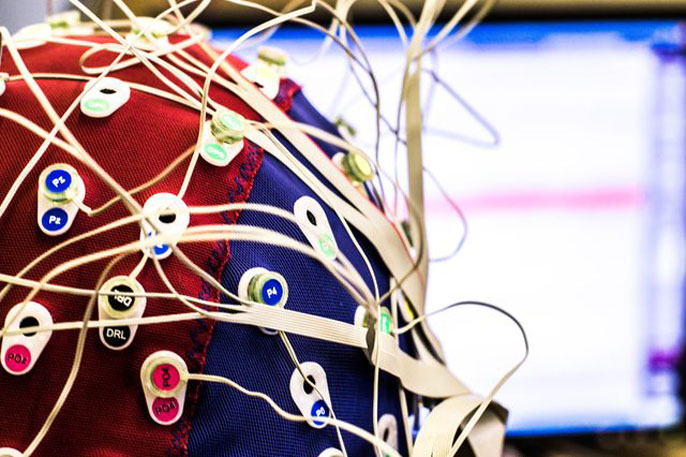 A study by researchers at the Semel Institute for Neuroscience and Human Behavior at UCLA has found a new noninvasive way to predict which individuals will respond favorably to the most commonly used medications to treat depression — using brain wave recordings.

Depression is a major public health problem and leading cause of disability that affects 17 million people in the United States every year. Less than one-third of people with the disorder find relief from depression with the first antidepressant that is prescribed for them — and patients must wait weeks to months to see if the antidepressant will be effective for them. Some people also stop taking antidepressants because of the medications’ side effects.

UCLA researchers report that a simple biomarker — a pair of brain-wave recordings, or electroencephalograms, that can be performed in a doctor’s office in about 10 minutes — can predict whether the person will enter remission after just one week of treatment.

“Knowing whether a medication is going to work could eliminate weeks of waiting by the patient, and get them on effective treatment more quickly,” said Dr. Andrew Leuchter, senior author of the study and a professor in the Department of Psychiatry and Biobehavioral Science at the Semel Institute.

The study is published online in the Journal of Psychiatric Research.

The researchers used the electroencephalogram recordings to predict recovery from depression in those taking escitalopram, a common antidepressant sold under the brand name Lexapro. Escitalopram works by increasing the levels of serotonin, a chemical messenger or neurotransmitter in the brain that helps to regulate mood.

Serotonin levels in the brain also maintain the ratio between slow brain waves (so-called delta–theta activity) and faster “alpha” brain waves. The brain uses this ratio between fast and slow waves to form chemical or electrical networks that support normal mood and thinking. Leuchter, who is also director of the Semel Institute’s Neuromodulation Division, and his colleagues reasoned that the effect of escitalopram in shifting the balance between delta–theta and alpha activity would predict the effectiveness of the drug in relieving symptoms of depression.

The researchers tested whether brain wave recordings in the first week of treatment would show that the antidepressant (as compared with a placebo) corrected the frequency imbalance — and predict a beneficial effect of medication on an individual’s depression after seven weeks of treatment.

Finding a 'true, specific response' to a drug for the first time

Researchers analyzed data from 194 people, 18 to 70 years old, with major depressive disorder. The individuals fell into three groups: two comprised of 70 and 76 patients, each treated with escitalopram for seven weeks, and a third group of 48 patients treated with a placebo. (The groups receiving escitalopram were part of separate studies evaluating the effectiveness of escitalopram compared with other types of antidepressants.) All of the patients were given an electroencephalogram before treatment, and a second one after one week of treatment (or one week after taking the placebo).

After one week of taking escitalopram, the brain wave recordings of the people who eventually responded favorably to the treatment differed significantly from the measurements of those who did not benefit. Specifically, those subjects who showed a large shift toward producing more delta–theta waves were less likely to enter remission with escitalopram treatment. Conversely, those subjects who shifted toward producing more alpha oscillations after one week of treatment with escitalopram were significantly more likely to find relief from their depression. Brain wave shifts did not predict treatment outcomes in patients given a placebo.

The study is notable in a number of ways, the researchers say. For example, although some previous studies have reported on biomarkers that can predict response — that is, whether an individual will get better — few have been able to predict whether a patient will enter remission.

“The other important finding — and the pleasant surprise — is that we also tested the biomarker in a group of subjects treated with placebo,” Leuchter said. “Many patients with depression who are treated with placebo also get better or well, but frequently this improvement is only short-lived,” he said. “Our biomarker selectively predicted remission with medication, but not placebo. This confirmed that we can differentiate a true, specific response to a drug from a non-specific placebo response. To our knowledge, this is the first time that a biomarker that differentiates placebo remission from drug remission has been reported.”

Biomarker could turn treatment away from trial-and-error

The researchers next plan to use brain wave recordings to evaluate other antidepressant medications as well as cutting-edge non-medication treatments such as transcranial magnetic stimulation, a magnetic method used to stimulate small areas of the brain.

Currently, finding the right antidepressant for individuals is a process of prolonged trial-and-error, Leuchter said. “As a result, it can take well over a year to recover from depression. Our biomarker could greatly shorten the length of time — to as little as one week — that a patient has to wait to see if a drug is going to work.”

The article was funded by the National Center for Complementary and Integrative Health, the National Institute of Mental Health, by research contracts with Eli Lily and Co., Pfizer (formerly Wyeth Pharmaceuticals), and Covidien (formerly Aspect Medical Systems). Leuchter has founded a company, Brain Biomarker Analytics, to further develop biomarkers and try to introduce them into clinical use.