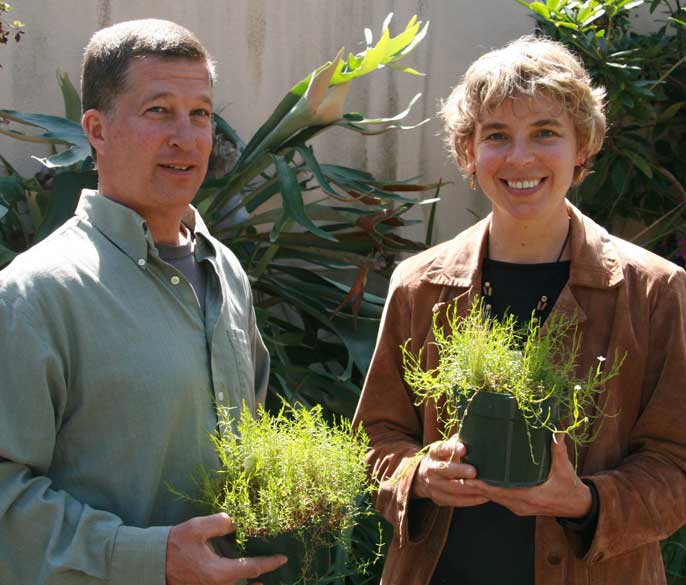 A critically endangered plant known as marsh sandwort (Arenaria paludicola) is inching back from the brink of extinction thanks to the efforts of a UC Santa Cruz plant ecologist and her team of undergraduate students.

Ingrid Parker, the Langenheim professor of plant ecology and evolution at UC Santa Cruz, got involved in the marsh sandwort recovery effort at the request of the U.S. Fish and Wildlife Service (USFWS). Although it used to occur all along the West Coast, from San Diego to Washington state, this wetland plant with delicate white flowers had dwindled to one population in a boggy wetland in San Luis Obispo County. Federal biologists wanted to reintroduce the plant to other locations, but they weren't sure where it would be likely to thrive.

"When you have a species that's only known from one place, how do you figure out where it could live? We had very little information about its biology that would allow us to predict where it might be successful," Parker said.

Her team, which included undergraduate students and greenhouse staff at UC Santa Cruz as well as USFWS biologists, propagated cuttings from the last remaining wild population, studied the plant's tolerance for different soil conditions in greenhouse experiments, and conducted field experiments to identify habitats where the plant could thrive. They published their findings in the April issue of Plant Ecology (available in advance online).

Surprisingly, the plants tolerated a much wider range of soil moisture and salinity than biologists had expected. "This really brought home to me the importance of experiments to help guide conservation," Parker said. "The one place where this species is found in San Luis Obispo County is a freshwater bog where the plants are in standing water. There are so few places like that left in California, we wondered if that's the only kind of place where it can grow. Instead we found that it actually does better without standing water."

In addition, field studies showed the importance of small-scale habitat variations, according to first author Megan Bontrager. "We planted out marsh sandwort in different habitats within a stone's throw of each other, and in areas dominated by willow they all died, whereas we had good success in nearby areas dominated by different species," said Bontrager, who worked on the study as a UC Santa Cruz undergraduate and is now a graduate student at the University of British Columbia.

A key finding was the discovery that a relatively common plant can serve as a useful indicator of good habitat for the endangered marsh sandwort. Water parsley (Oenanthe sarmentosa) is a native plant that grows in wet areas along the west coast of North America. Field experiments in two California State Parks in Santa Cruz County showed that marsh sandwort does well in areas dominated by water parsley. This information provided guidance for larger-scale reintroduction experiments in the Golden Gate National Recreation Area (GGNRA) in Marin County.

"We think water parsley might be a good indicator of moisture and light conditions that work well for this endangered species. That isn't to say that every place water parsley grows will be good for marsh sandwort, but within the range of coastal habitat this plant likes, planting it alongside water parsley is likely to be successful," Bontrager said.

The researchers were thrilled to discover that plants in the reintroduced populations are flowering and setting seed. This is especially important because sexual reproduction has not been observed in the one remaining natural population.

"Our reintroduction experiments have resulted in much more genetic diversity for this endangered species than there was before," Parker said.  "When we started, only 11 different genetic clones were left in the world. Seeing plants not only surviving but producing flowers and seeds in the field was fantastic."

Arenaria cuttings root easily, making it relatively straightforward to propagate large numbers of plants in the UC Santa Cruz greenhouses. Greenhouses director Jim Velzy will continue to maintain the collection of Arenaria plants to preserve the genetic diversity of the original population in case it ever goes extinct in the wild.

For the field studies, Bontrager and coauthor Kelsey Webster, another UC Santa Cruz undergraduate, worked closely with coauthor Mark Elvin, a U.S. Fish and Wildlife Service biologist. With help from other undergraduates in Parker's lab, they prepared the plots, planted out marsh sandwort cuttings propagated in the greenhouses, and made regular visits to check on the plants and measure characteristics of the habitats where they were planted. Planting the larger field plots in Marin County was a big job that involved about a dozen undergraduates and almost as many federal biologists, Parker said.

Bontrager said the project is a good example of how government agencies and academic researchers can work together to save endangered species. "This collaboration was fruitful both in its practical conservation outcomes, by establishing new populations of an endangered species, and also in furthering our understanding of wetland ecology," she said.

This research was funded by the U.S. Fish and Wildlife Service.