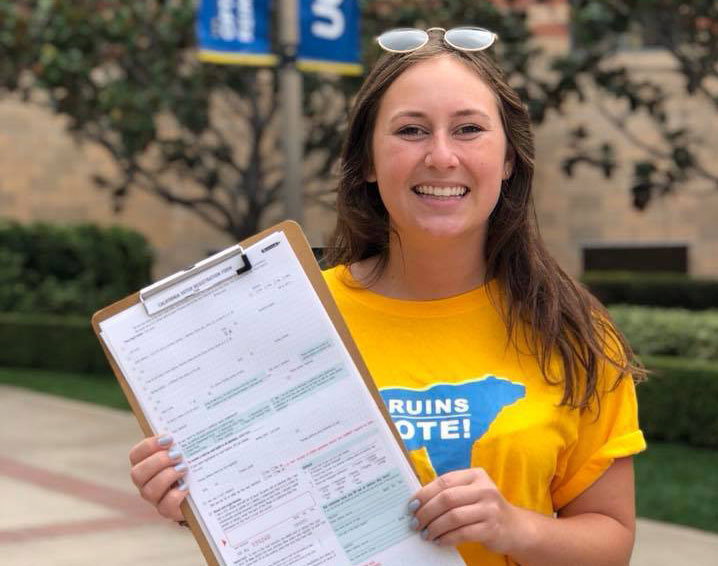 A member of UCLA BruinsVOTE! holds up a voter registration form before the midterm election held on Nov. 6, 2018.

This year, millions of young adults will join the ranks of California voters, adding to a growing legion that has now outstripped older voters as the largest share of the voting public.

As the country approaches an election in the midst of the COVID-19 health crisis, UC surveyed this potentially powerful segment of the electorate to learn about their attitudes toward voting, civic engagement and the issues they care most about.

The results reflect a population that is overwhelmingly worried about the future of the country and fired up to vote in 2020, despite facing an election that is likely to be different from almost any the country has ever known.

“Now, more than ever, with the COVID-19 crisis and the Black Lives Matter protests, we are seeing the impact that elected leaders and their policies have on our lives and our communities,” said 2020 UC Riverside graduate Sam Roberts, who continues to be active in student voting efforts.

The poll, conducted by YouGov on behalf of UC, surveyed 1,000 18- to 24-year-olds between May 28 and June 5, 2020, to gain insights into their attitudes toward voting, civic engagement and the COVID-19 pandemic ahead of the 2020 election.

“Younger people have not always been as inclined to vote as older voters — but we’re the ones that are going to be affected 20 and 30 years from now by the decisions that are made today,” Roberts said. “We need to make sure the people and the policies we’re voting on are representative of our concerns.”

The poll found that young people are not only interested in voting themselves but are actively working to influence others — by speaking to family and mobilizing through social channels — and that that they hold diverse political views. They also overwhelmingly support making voting easier and trust voting by mail, although they are concerned about the impacts of the pandemic on turnout.

College students are especially active in voting and following the issue, compared to their non-college going peers, a finding that indicates the important role higher education plays in promoting civic engagement, including educating students about the process of registering and casting a ballot, which can be confusing to new voters.

UC in particular has seen a surge in student voting that echoes — and, in fact, significantly exceeds — increases in youth participation nationwide. That is according to a policy brief the university released looked at voting trends and participation among UC undergraduates.

Together, the data show a generation of voters eager to flex their political power — despite, or perhaps because of – the pandemic.

“The young people I know are way more politically active and engaged than they were even six months ago,” Roberts said. “There are so many real-world examples of the importance of quality leadership, and how state and local leaders respond.”

Contrary to the reputation of young adults as prone to apathy, California’s 18- to 24-year-olds are paying close attention to the election and are actively working to influence friends and family on the candidates and issues.

Young voters are motivated to turn out

The UC poll reflects national trends that show a surge in youth civic engagement. Several months ahead of the October 19 voter registration deadline, 70 percent of California youth surveyed by YouGov reported they were registered to vote. More than five in 10 say they intend to vote.

While 38 percent of eligible California voters (of all ages) participated in the primary, according to the California Secretary of State’s office, an increase over the 2016 primary, over half of registered 18- to 24-year olds in the UC/YouGov survey reported casting a ballot.

“The poll confirms what we as student leaders have long suspected: that California youth are excited and motivated to vote, even under these extraordinary circumstances,” said UC Student Association President Varsha Sarveshwar. “We will continue to find creative ways to engage students online to ensure that turnout is strong this November.”

UC campuses especially have seen an upswing in student voting.

While participation among college students nationally doubled from 2014 to 2018, they nearly tripled at UC, according to data from the National Study of Learning, Voting and Engagement (NSLVE) by Tufts University.

Six out of 10 eligible UC undergraduates voted in the 2016 presidential election, and just over five out of 10 did so in the 2018 midterms.

While often perceived as overwhelmingly liberal and tending toward extremes in their ideology, UC’s survey shows young people are much more measured and diverse in their views.

In line with older voters, the coronavirus is top of mind: 87 percent of young adults in California are closely following the news about the virus and 72 percent say they are worried about it, while 60 percent cite the response to the pandemic as their top political concern.

And contrary to media accounts of young people flouting social distancing guidelines, 86 percent of young adults say they are strictly following public health guidelines to socially distance, maintaining 6 feet of separation from others and only leaving their homes for essential services. Eight in 10 have told others to practice social distancing. Black students (90 percent) are the most likely to say they are strictly following guidelines.

Youth are also concerned about the impact COVID-19 will have on the election, with 69 percent saying they are very or somewhat concerned.

“Young people are worried about how they’re going to vote safely, and how they’re going to protect the safety of their families if they have to wait in line at the polling station,” Roberts said. UC students and leaders have launched a systemwide effort to make sure students are educated on how to vote during the pandemic by voting early, voting by mail and making sure their registration is current if they have moved.

In a survey taken ahead of the death of George Floyd and the ensuing demonstrations about police brutality, young adults rate gun violence, jobs, health care and immigration as chief among their concerns — but their choices also reflected varying priorities depending on race, gender and educational background. Domestic issues have edged out climate change as the most urgent concerns on students’ minds.

Homelessness and college costs are more concerning to those between 18- to 20-years-old compared to those 21 to 24. Black youth are more likely to rate public safety as a top concern over jobs, the economy and immigration.

Hispanic youth are more likely to rate immigration as a top concern while voting rights are most concerning to white youth. Female youth are concerned about a wider range of issues, and are more likely to list women’s rights as an important issue (39 percent to 17 percent).

Social media is the primary source for news and politics

With traditional modes of campaigning and canvassing on hold during the pandemic, young people are relying on social media and digital platforms more than ever to share opinions and mobilize peers.

“We are asking all California youth and UC students: Share what inspires you. Why are you voting? What change do you want to see?” Roberts said. “The more students talk about why voting is important and the issues they care about, the more their friends start posting and it becomes something everyone’s talking about.”

The poll found that young adults are more than twice as likely to share their political opinions through social media as through other forms of communication, such as face-to-face conversations. It’s also the primary way they receive information: More than 60 percent cited digital sources and social media as their primary source of information as compared to 25 percent who said traditional media, and 6 percent through friends and family.

Of mainstream news sources, CNN is most widely used (43 percent), followed by The New York Times (35 percent) and Fox News (29 percent). Satire (such as “The Late Show with Stephen Colbert” and “The Daily Show”) account for 9 percent.

For complete poll questions and findings, view or download the UC/YouGov survey toplines and tabulations.

High-resolution versions of the images in this release and additional images are available for reprinting, no additional credit is needed.