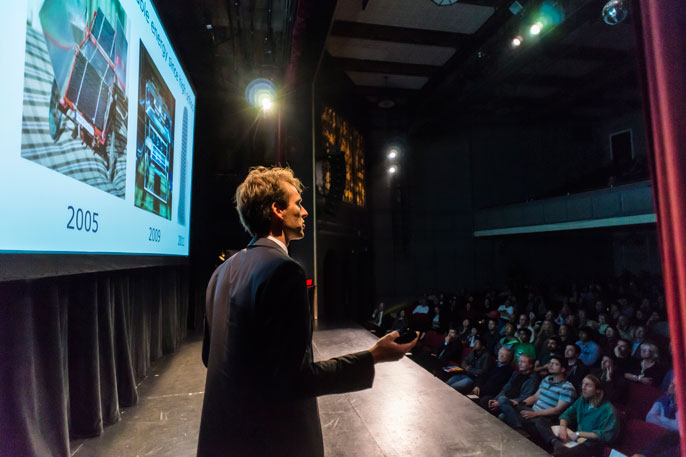 The waves that crash along the Pacific coast are so powerful they produce enough energy to light up 50 million homes. It’s a virtual tsunami of endless, clean energy – but only if the right idea comes along for how to capture it.

Today, wave energy is on par with wind energy decades ago: All sorts of technologies are being tested, but none has emerged as an optimal solution that could sweep the globe.

Yet as populations swell among coastal cities, the potential remains huge. Waves create energy day and night: on a sunny day or during a dark storm, whether it’s breezy or calm.

The Department of Energy is so bullish on wave energy it’s doling out more than $2.5 million in prize money to researchers with the most promising new technology.

Among those who could come out on top is the CalWave team led by Marcus Lehmann, a visiting student-researcher at Lawrence Berkeley National Laboratory, who is working to take a unique “wave carpet” technology out of the test tank and into the open ocean.

Based on the technology, Lehmann has launched CalWave Power Technologies, a startup that offers a relatively safe and economically competitive approach to harnessing wave energy from muddy seabeds below the ocean’s surface. Lehmann has a lot riding on the next six months, a period of time in which he will complete his doctorate, graduate CalWave from Berkeley Lab’s inaugural Cyclotron Road incubation platform, and learn if the Wave Carpet will win the DOE’s Wave Energy Prize.

The Wave Carpet – which looks much like its name suggests – was developed by Reza Alam, a UC Berkeley assistant professor of mechanical engineering who in previous research identified the incredible amount of energy that can be extracted from muddy seabeds, the pockets of the shoreline that fishing boats often retreat to during storms. It’s these less choppy waters that absorb more energy underneath the surface.

Lehmann first learned about Alam’s research in an MIT Technology Review article he read shortly after beginning a master’s program at Technical University of Munich in his native Germany. In 2012, he arrived in Berkeley and joined Alam’s Theoretical and Applied Fluid Dynamics Laboratory.

Although handed a different assignment, Lehmann gravitated to the wave business. Over the holiday break, Lehmann and fellow researchers built an impromptu Wave Carpet prototype out of scrap materials, including bike tires, a pump and pingpong balls. Eventually, with Alam’s support, he built his masters degree around its proof-of-concept.

Placed below the water’s surface near the seafloor, the carpet adopts the wave motion of the ocean, moving the attached pumps to produce hydraulic pressure that is then piped onshore and converted into power.

Unlike other technologies that often rely on turbines or gadgets at the ocean’s surface to gain higher efficiencies, the Wave Carpet has less interference with shipping lines, fishing operations and marine wildlife, Alam says.

What sets the Wave Carpet carpet apart is its “survivability,” a common problem among emerging wave energy companies.

Built with corrosion-resistant materials, the Wave Carpet is submerged and thus unseen, sheltered from collision dangers and violent storm conditions scientists expect will intensify with the continued onset of global warming.

The Wave Carpet – which has been featured in National Geographic, Fast Company, Reuters, and other media outlets – is among the first technologies incubated by Berkeley Lab’s Cyclotron Road program, which supports new energy breakthroughs by bridging the arduous science-to-product gap.

Cyclotron Road founder and director Ilan Gur, whose track record includes the launch of two former clean-tech startups built on UC intellectual property, describes the program as less of a traditional incubator and more of an “entrepreneurial postdoc.”

“Cyclotron Road helped us to build an ecosystem, know what conferences to attend, advisors to seek out – it really focused our efforts,” Lehmann says. “This is critical because time is limited and we are a small team.”

UC filed a utility patent for the Wave Carpet in 2015, and Alam’s student researcher team secured a permit with UC San Diego to conduct an ocean demo project. But then, Lehmann says, “the prize came up.”

Eyes on the prize

As an opportunity to prove the Wave Carpet’s prowess among its peers, DOE’s Wave Energy Prize was too good to pass up.

The two-year competition began in 2015 with 92 teams. CalWave was still standing after judges whittled the initial field down to 20 finalists. Tasked with designing and building 1/50-scale prototypes for testing, the teams were then slashed to nine.

CalWave earned the highest score of the remaining finalists, and it especially stood out in the category of economic viability, which focused on the costs of mass production.

“What energy utilities are looking at before they even talk to you is, ‘What are your generation costs?’” he says. “A lot of Ph.D. students focus for years on performance, and in the end they have the Formula 1 car. But nobody can afford it.”

Alam asserts the science behind wave energy is very complicated.

The nine Wave Prize finalists received $125,000 to develop 1/20-scale models to test this summer at the nation’s most advanced wave-making facility, the football field-sized Naval Surface Warfare Center’s Maneuvering and Seakeeping Basin in Maryland. In June, Lehmann and his team deployed to a tank facility in Maine to begin preparations.

Lehmann says the cash prizes are key to continuing CalWave’s operations. At about the same time winners are revealed, CalWave’s seed investment from Cyclotron Road will be drying up.

But, quoting author Steven Pressfield, Lehmann says: “The artist doesn’t wait for inspiration, he acts in the anticipation of its apparition.”