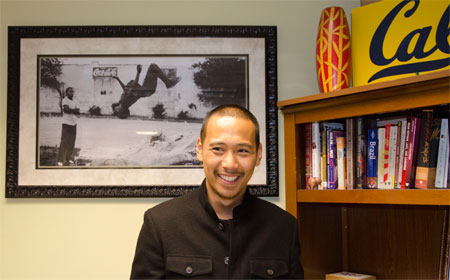 Meng So, coordinator of the Undocumented Student Program at UC Berkeley, in his office in the Cesar Chavez student center.

By the numbers (according to estimates from the Pew Hispanic Center, Urban Institute and Meng So):New state laws “The principles behind AB130 and 131 reflect UC Berkeley’s institutional identity as an engine of social and economic mobility, providing access and affordability that allows promising students of exceptional caliber to pursue higher education.” — UC Berkeley Chancellor Birgeneau, who traveled to Sacramento to lobby for the California Dream Act.

Meng So arrived in the Bay Area the way many children do — in the arms of parents fleeing strife in their homeland.

Born in a refugee camp on the Thai-Cambodian border, he was not quite 2. The family settled in Hayward. So’s father and mother worked 15 hours a day or more and raised their kids, five boys and a girl.

Though they came as refugees from the Khmer Rouge genocide that devastated Cambodia in the late 1980s, the Sos lacked full legal status for about a dozen years. Watching his parents jump through hoops and hurdles trying to secure food, housing, health care — the basics of life — while seeking citizenship was tough, their middle son says.

“That informs my work  — my parents’ struggles,” says So, who now, with a B.A. from UC Berkeley and a master’s in higher ed from UCLA, serves as Berkeley’s first Undocumented Student Program coordinator.

The half-time position is believed to be the only one of its kind in any university in the United States and emerges amid sharply divided national debate around immigration. So’s job was created in January on the recommendation of a campus task force looking into the challenges faced by students who lack legal status, under the leadership of Chancellor Robert Birgeneau.

Creating the position is a milestone for higher education in the United States, So says. “Berkeley has been one of the pioneering institutions to create a campus support system for undocumented students.”

“The story of my own family’s immigration journey,” he says, “layered with growing up poor, being English-language learners and our parents having no college degree — it’s easy to imagine how impossible achieving a higher education could seem.” As with many of his own students today, though, his parents “encouraged me to strive for an education, and worked day and night to ensure I did,” adds So, who considers himself “fortunate to be able to ease the weight of my students and their families’ load through this new position.”

So’s job is to help weave a safety net under students who have what it takes to get into UC Berkeley but face their own hoops and hurdles once here — starting with knowing whom they can talk to. Now they have So.

“It’s an anxious moment for undocumented students to out themselves, because of the legality around it, so they don’t know who they can trust, they don’t know what they can say,” So explains. “For a long time they’ve been forced under the radar. Any mention of their status could risk deportation for them and their family members. Elements of basic student life such as going out, participating in a small protest, or even jaywalking in order to make it to class faster are risks undocumented students must be conscious of.”

Lack of legal status means that undocumented students cannot get a Social Security card or driver’s license. They cannot be legally employed, or qualify for federal student loans or work study. Many are forced to seek laborious low-wage jobs that are paid off the books, leaving them vulnerable to underpayment and other kinds of exploitation.

Juggling these challenges along with classes, jobs and family responsibilities, many still maintain solid GPAs — an average of 3.3 for students who received Berkeley Dream Act scholarships last spring, the first time such private tuition aid was available to qualifying undocumented students under a new state law.

“That’s no small accomplishment,” says So. “It’s a testament to their resilience and sheer will to lead a successful life, provide for their families and serve their communities.”

So knows that firsthand. He comes from the same place they do. Growing up in Hayward, he went to public schools, ones he describes as under-resourced and low on the performance scale. During high school, he often took days off to work with his father at the doughnut bakery and help support his family, making up his classes at community college on the weekends.

He admits to earning “pretty good grades,” but is quick to credit other people with helping him get to Berkeley — mentors, outreach programs and, especially, his parents.

“While my parents didn’t have higher education, and they couldn’t navigate me through that process, they provided me with support in other ways,” he says. “They encouraged me to get an education, and they were my moral compass to be able to get here to UC Berkeley.”

Berkeley’s Summer Bridge, an intensive six-week program for incoming freshmen, helped build So’s confidence about meeting the academic and cultural demands of the campus. Talking with other students like himself helped him deal with the personal and social aspects, too — “what it feels like to be first-generation, to be low-income or to feel like the only one of your background to be at a place like UC Berkeley. It can be quite overwhelming.”

As a freshman, he found a home in the Educational Opportunity Program, which helps students like him adjust to college. Along with pursuing a major in American studies, with a concentration on students of color in higher education, So also went to work reaching a hand out to those coming up behind him — as a peer counselor in EOP, in Cal Corps’ K-12 outreach and with the student-run Bridges Recruitment and Retention Center, which works to get more under-represented students coming to Berkeley. After graduating from Berkeley in 2010, he spent a year at UCLA earning his master’s — and was back at Berkeley by summer 2011 as a seminar instructor in Summer Bridge.

By fall, he held a full-time position as a counselor in EOP, part of Student Life Advising Services, where the new job of Undocumented Student Program coordinator was created. The job was one of 19 task-force recommendations aimed at building campus support for undocumented students, as Gibor Basri, vice chancellor for equity and inclusion and task-force chair, explained at the time they were announced: “We found that undocumented students are often socialized to be invisible… We’d like to encourage everyone to be fully aware of relevant policies and practices.”

So applied, and now splits his time 50-50 between that work and his EOP academic counseling.

Official numbers on how many Berkeley students are undocumented don’t exist. The chancellor’s task force report of May 2011 said “no hard data has been collected” and cited an estimate of “at least 75 potential undocumented students at Berkeley” from a 2010 report to the UC regents.

So knows there are many more. Since he’s become their go-to person on campus, he’s heard from about 200, and estimates that 180 to 190 undergraduates are enrolled this fall. At Berkeley, about 60 percent are Latino, and 40 percent are Asian or Pacific Islander. Many are first-generation college students, and the majority are low-income.

In his tiny office in the Cesar Chavez student center on Lower Sproul Plaza — dominated by a blue-and-gold Cal placard and a framed black-and-white photo of kids finding joy doing flips on a mattress in the street — he meets them one on one, serving as their academic counselor, connecting them with resources, solving problems and providing an environment of safety and understanding. He also works with student groups building bridges among the often isolated undocumented students and also between them and their allies.

Many barriers prove insurmountable. So tells the story of a math major with a 3.7 average and great credentials who was headed to an Ivy League graduate program until his legal status became known. The door slammed shut. One reason, he says, was that many graduate programs have students work as GSIs — paid teachers — and undocumented students can’t work legally.

So also is working with student groups, faculty, staff, administrators — anyone who’s up for the challenge — to strengthen Berkeley’s support system for undocumented students.

Among his projects: launching a Dream Lending Library to help students obtain books; collaborating with the Human Rights Law Clinic at Berkeley Law to develop a system of legal support for undocumented students; creating a Dream Resource Center, a dedicated space where the students can feel safe, be with one another and have access to computers and academic and other resources; developing an Ally Training Program to help faculty and staff become more empathetic around undocumented students’ daily realities; and ultimately creating a website about the Undocumented Student Program to provide students with a central place to look for information and resources.

“Berkeley is really leading the discourse in the landscape of higher education by providing support for undocumented students,” he says, “Our intent is to provide a roadmap and structure for support services to be implemented across the country.” He envisions other UC campuses following suit, and then the state universities and community colleges and perhaps beyond.

So isn’t merely stating the obvious when he says he’s “extremely busy.” But he calls his work a labor of love, and credits the “elder dreamers” who came before him, as well as students and student groups, faculty and staff allies and Birgeneau for groundbreaking work that he’s expanding on. The hardest work, he adds, is being done by the undocumented students themselves.

As always, So’s family remains a driving force in what he does. “Put in context of my family’s journey — they didn’t know where they were going to go, or how they were going to survive — for me to be in this current position, it’s humbling,” he says.