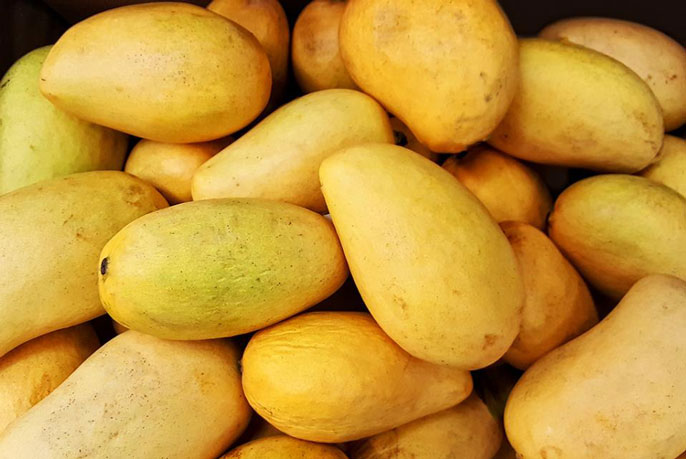 Study finds women who ate just a half cup of honey mangoes four times a week saw a decrease in wrinkles.

Mangoes, like other orange fruits and vegetables, are rich in beta-carotene and provide antioxidants that may delay cell damage. A new study from researchers at the University of California, Davis, finds eating Ataulfo mangoes, also known as honey or Champagne mangoes, may have another benefit — reducing facial wrinkles in older women with fairer skin. The study was published in the journal Nutrients.

“That’s a significant improvement in wrinkles,” said lead author Vivien Fam, a doctoral student in the UC Davis Department of Nutrition. But the findings are very specific and come with a caveat.

“Women who ate a cup and a half of mangoes for the same periods of time saw an increase in wrinkles. This shows that while some mango may be good for skin health, too much of it may not be,” Fam said.

Researchers said it’s unclear why consuming more mango would increase the severity of wrinkles but speculate that it may be related to a robust amount of sugar in the larger portion of mangoes.

The randomized clinical pilot study involved 28 postmenopausal women with Fitzpatrick skin types II or III (skin that burns more easily than tans). Women were divided into two groups: one group consumed a half cup of mangoes four times a week for four months, and another consumed a cup and a half for the same period of time. Facial wrinkles were evaluated using a high-resolution camera system.

“The system we used to analyze wrinkles allowed us to not just visualize wrinkles, but to quantify and measure wrinkles,” said Robert Hackman, professor in the Department of Nutrition and corresponding author of the study. “This is extremely accurate and allowed us to capture more than just the appearance of wrinkles or what the eye might see.”

The study looked at the severity, length and width of fine, deep and emerging wrinkles. Fam said the group that consumed a half cup of mangoes saw improvements in all categories.

Fam said further research is needed to learn the mechanisms behind the reduction in wrinkles. She said it may be due to the beneficial effects of carotenoids (orange or red plant pigments), and other phytonutrients that could help build collagen.

Other authors, all from UC Davis, include Roberta Holt, Department of Nutrition; Carl Keen, departments of Nutrition and Internal Medicine; and Raja Sivamani, Department of Dermatology. Research support came from the National Mango Board.