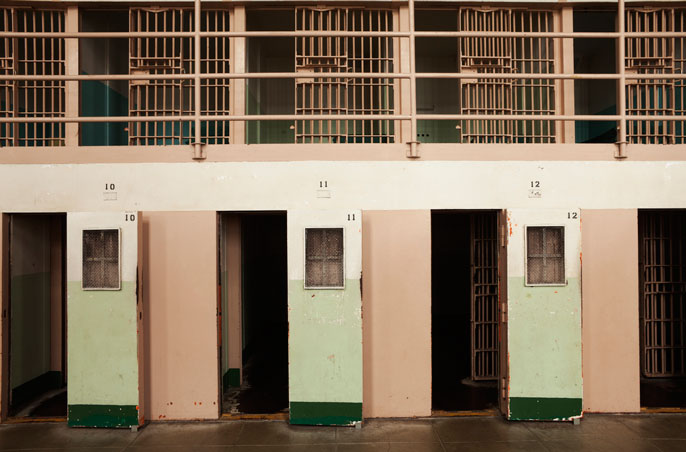 A view of the solitary confinement cells in The Hole at Alcatraz, San Francisco.

In a landmark court ruling this week that prohibits solitary confinement in Canada, a Canadian judge relied heavily on expert testimony by psychology professor Craig Haney.

Haney, who has spent decades studying the psychological effects of imprisonment, was involved in the nine-week trial that took place last summer in Vancouver, testifying about the effects of segregation on mental health.

"It is a stunning ruling. It could not be more decisive or far reaching," said Haney. "It gratifying to see how carefully and astutely the judge worked through the complicated scientific evidence to reach his conclusions."

Haney, whose expertise has figured prominently in numerous court decisions regarding the treatment of prison inmates in the United States, said the decision is in line with a trend he has seen in recent years in this country, as well. "Here it's on a case-by-case or state-by-state basis," he said, noting that Colorado, Washington, Maine, Mississippi, and California are among the states that have limited or eliminated solitary confinement.

"The head of the California Department of Corrections has said Pelican Bay was essentially a mistake, a failed experiment," said Haney, referring to the state's notorious "supermaximum security" prison in Northern California, where more than 1,000 inmates were held in solitary confinement until recently. "They came to this view grudgingly, but they finally turned their thinking around."

Because the Canadian judge invalidated rules that apply throughout the federal prison system in Canada, his ruling applies to the entire country, said Haney, who submitted two reports and testified in the case. The judge's decision is being called "the most important prison law decision from a trial court in Canadian history."

"This decision will help alleviate a great deal of suffering in Canadian prisons," said Haney. "It is part of a worldwide movement to address this cruel practice. I am grateful my work could be part of it.

Inmates subjected to solitary confinement are at risk of becoming more dangerous within the walls of an institution, as well as in the community outside following their release, according to Leask. To alleviate suffering, the Canadian correctional system must invest in new construction, but more importantly, a "new mindset," he wrote.

In his testimony, based on decades of scientific research, Haney described the impact of solitary confinement on inmates, who are forced to adapt in socially pathological ways. They gradually change their patterns of thinking, acting, and feeling to cope with the "profoundly asocial world in which they are forced to live, adapting to the absence of social support and the routine feedback that comes from normal, meaningful social contact," Leask wrote of Haney's testimony. "Although their adaptations may have been functional in isolation, they are typically acutely dysfunctional in the social world most inmates are expected to re-enter." In some cases, inmates become disabled and are unable to live a "remotely normal or fulfilling social life."

The harmfulness of segregation is widely accepted in the scientific community and there is a growing consensus to restrict or eliminate its use among correctional organizations, human rights groups, religious groups, and mental and medical health associations, said Haney, who has testified before Congress about the perils of solitary confinement.

"More recently, correctional organizations have come to the same conclusion, banning it for certain vulnerable populations like juveniles, the mentally ill, and pregnant women and limiting its use for others," he added.

In the final years of the Obama administration, Haney and others worked with the Justice Department to introduce new limits on the use of isolation in federal prisons. However, Haney said the fate of those regulations is now "very much in doubt."