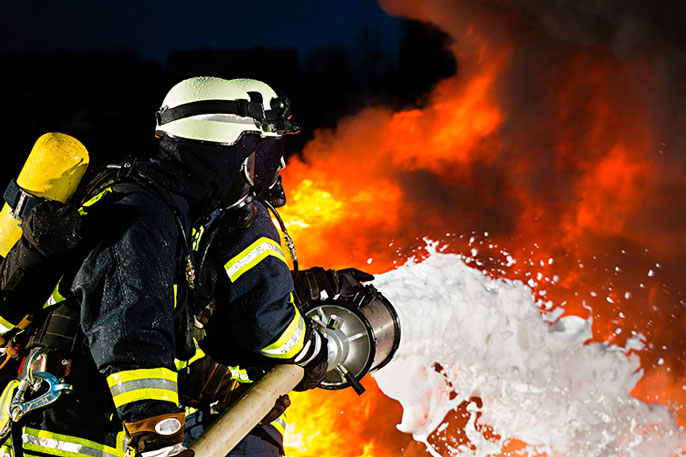 Firefighting foam contains carcinogens that have been found to contaminate drinking water supplies around some military bases and industrial sites.

Firefighting foam containing highly fluorinated chemicals is contaminating drinking water supplies around many of the nation’s military bases, airports and industrial sites, according to a new study by UC Berkeley and Harvard University researchers.

In humans, these chemicals have been linked to kidney and testicular cancer, high cholesterol, obesity and endocrine disruption.

The study authors estimate that 6 million or more people may be drinking water contaminated with these highly fluorinated chemicals – in this case, poly- and perfluoroalkyl substances (PFAS). These chemicals are used widely to extinguish liquid fuel fires and during training exercises, and are referred to as aqueous film-forming foams (AFFFs) because they contain a fluorocarbon surfactant, such as perfluorooctane sulfonate (PFOS), that reduces surface tension and increases spreading over the liquid.

“During firefighting practice drills, large volumes of these toxic chemicals wash into surface and ground waters and can end up in our drinking water,” said Arlene Blum, a co-author of the study and visiting scholar in the Department of Chemistry at UC Berkeley. “Such persistent chemicals should only be used when essential, and never for training.”

The study, which appears Aug. 9 in the journal Environmental Science & Technology Letters, was based on levels of contaminants in drinking water measured in EPA’s Third Unregulated Contaminant Monitoring Rule (UCMR3) study. These measurements suggest that at least six million people have drinking water that exceeds the recent EPA health advisory levels for perfluorooctanoic acid (PFOA) and perfluorooctane sulfonic acid (PFOS).

Problem of fluorinated chemicals in drinking water is 'enormous'

Blum, the founding director of the Green Science Policy Institute in Berkeley, said that a major conclusion from these studies is that the problem of fluorinated chemicals in our nation’s drinking water is enormous. The available water data only reveals the tip of an iceberg of contaminated drinking water.

“Our results point to the need for the EPA to enact enforceable regulations to protect the health of the millions of Americans being exposed to PFAS in their drinking water,” said co-author Thomas Bruton, a graduate student in UC Berkeley’s Department of Civil and Environmental Engineering.

Another study by Harvard researchers appearing in the Aug. 9 issue of the journal Environmental Health Perspectives connects early life exposure to the fluorinated chemicals to reduced immune responses that persist into adolescence. A recent study in the same population found that mothers with higher exposures to these substances were capable of breastfeeding their children a shorter time span, perhaps due to adverse effects on hormonal functions.

Other authors of the study are Elsie Sunderland, Cindy Hu and Courtney Carignan of Harvard University and Simona Balan of the California Department of Toxic Substances Control. Bruton’s work was funded by the U.S. National Institute for Environmental Health Sciences Superfund Research Program and UC Berkeley’s Superfund Research Center. The Harvard research was supported by the Smith Family Foundation and a private donor.