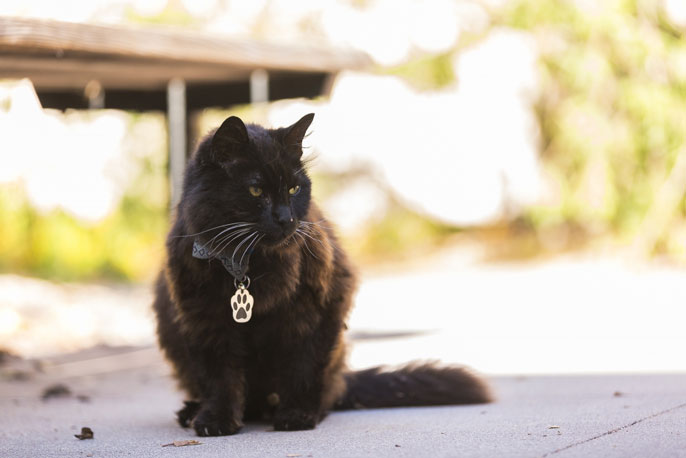 No one knows exactly when or where Big Boy was born, or how he came to live at UC Santa Barbara. As best anyone can figure, he showed up near some biology labs around 2005, possibly left behind by a former staff member who could no longer keep him as a pet. He has made his home in a small courtyard on campus for the past 15 years, cared for by many, but owned by no one.

Often, people find out about Big Boy through word of mouth, and so a network of fans and stewards has built steadily over the years. Katie Title, who works as an academic advisor in the College of Engineering, was told by a former coworker about a very friendly campus cat. Title started spending a few lunch breaks per week visiting the cat, and eventually decided to step up and become his primary human liaison.

“I was just a fan originally,” Title said, “but now I have become the central contact for him.” Last year, some concerned students took Big Boy to a local shelter, ASAP (the Animal Shelter Assistance Program). The shelter checked him out, determined he was not a stray and released him (after Title volunteered to be his official campus designate).

Title created a Facebook group so that people could learn more about Big Boy and so that she could accurately communicate information about his care and well-being. She even donated her time and money to take him to the vet for a check-up, where he received a clean bill of health (aside from some necessary routine dental work — more on that later).

In her feline caretaker capacity, Title has made official a system that has been in place for Big Boy’s whole life. As she describes it, many different people contribute a small part of his care to make sure he continues to thrive. Someone prints and delivers a new log sheet for his feedings each month; another person trims his nails; fans bring hordes of Greenies (his favorite treats) and store them in a donated weatherproof container.

Title says that even when she occasionally worries about Big Boy, she is always comforted to find he is cherished and spoiled by the campus community. When his food bag (Purina Fancy Feast — Ocean Fish & Salmon flavor only, please) is empty, she almost always finds another one in its place when she goes to deliver a fresh bag herself. She even came by on Thanksgiving Day, concerned that he might need extra provisions for a long weekend when campus is virtually empty. “At that point, he had already been fed and people were coming by his courtyard to check on him,” she said. “It eased a lot of my concern.”

For an outdoor senior cat, Big Boy is in excellent health. This is due in large part to the group effort that ensures he is fed, groomed and has access to fresh water. Title said she doesn’t even know everyone who is involved in caring for him. “You meet too many people at Big Boy’s courtyard to remember everyone,” she noted.

Since his short visit to a shelter, Big Boy’s caretakers have become even more fastidious about making sure that visitors know he is being watched over and checked on daily. The feeding log, for example, includes extra instructions about not leaving out any extra kibble (which might attract rodents) or changing up his diet (which might make him sick).

During the rainy season, Big Boy has his choice of two warm shelters, one donated by Title and the other courtesy of Carl Anderson, a groundskeeper who has worked on campus for more than 25 years. Anderson watches over Big Boy (whom he remembers being called NBC — short for New Black Cat — when he first arrived) and Solo, the last of a long line of outdoor cats who live near University House. He puts out homemade wooden shelters with straw for the cats each winter, and replenishes their bedding when needed.

Anderson remembers when five or six cats lived on campus, in different locations. All were spayed or neutered, which means Big Boy and Solo are the last of their respective lines. Anderson swears the cats adopted him, and says that even though he is eligible for retirement, he will keep working until they no longer need his care. “Interesting enough, they kept me here,” Anderson said. “The cats have been my compass.”

He’s not alone. Big Boy’s admirers come from all over campus to sit with him for a few moments, giving him some love and getting a little comfort in return. “Thanks for the much-needed kitty therapy,” one visitor wrote on Big Boy’s log sheet, adding, “finals suck.” Another person wrote: “Came back from L.A. just to see him!”

Nils Methot and Tanisha Ram, both fourth-year biochemistry majors, have made visits to Big Boy a part of their daily college routines. Methot calls his relationship with the cat “short but memorable,” noting that Big Boy seems happy and “gets a lot of attention compared to most cats.” “I appreciate that he shares his love,” said Ram. “He walks around to everyone in the courtyard and says hello.”

For those who miss their pets at home or need some creature comfort to help them get through the academic year, Big Boy is a welcome campus resident. Anderson is allergic to cats, and said he appreciates that he can still have the experience of caring for them. Title, who has a dog at home, believes her interactions with Big Boy have enriched her life. “I like to say that I have a cat and a dog. My cat just lives at work,” she said.

So much has already been done to ensure that Big Boy lives comfortably, but there is still more to do. His teeth need cleaning, which requires anesthesia and is more expensive than a typical checkup (though his vet, a UC Santa Barbara alum, did offer a discount for a cat who is a true Gaucho). Title has so far been more than willing to bankroll his health-related expenses, but this one will be more than she can afford. So, she has started a GoFundMe page to raise the money for his procedure. She pledges to keep any extra money raised in a fund for his continuing care.

Title and Big Boy’s other caretakers and fans recognize that he won’t be around forever. He is already spending more time napping and enjoying the shaded spots in his courtyard than he used to. Title hopes that when Big Boy reaches an age where he no longer enjoys being outside or greeting guests, he will have a chance to go to a peaceful home away from his many visitors. “I hope that when it’s time, he gets to retire from campus and live comfortably,” she said, “but as long as he is moving around and eating, he is living a good life and has no reason not to be here.”

She promises to keep helping him however she can for the rest of his life. “I’m in it until he retires or I retire,” Title said. “He gave me a lot of lunchtime companionship, and this is my way to pay him back.”